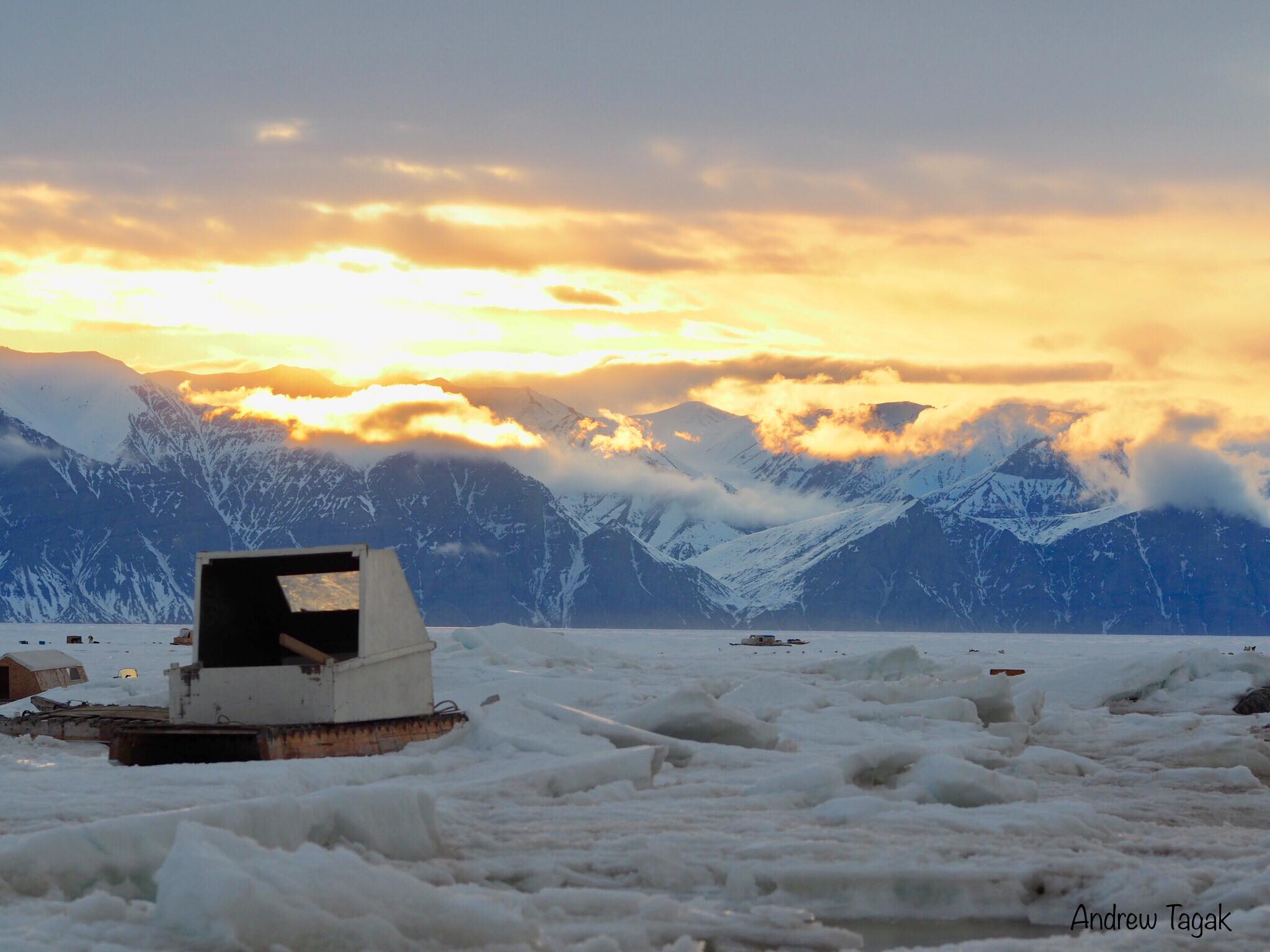 Qamutiks are seen on the sea ice at Pond Inlet, overlooking Bylot Island. Inuit leaders from North Baffin Island say that their culture could be destroyed if Baffinland expands its iron ore mine as planned. (Photo by Andrew Tagak)

North Baffin community leaders remain unhappy with Baffinland’s plans to expand its Mary River mine, following the most recent round of regulatory meetings.

How unhappy? Jerry Natanine, the mayor of Clyde River, says that if he had a military, he’d deploy it.

Similarly, when Eric Ootoovak, the chair of the Mittimatalik Hunters and Trappers Organization, was asked how satisfied he was with the meeting’s outcome, he said: “I am the least satisfied.”

Both worry about the environmental impacts of the mine expansion, and specifically how these changes will affect marine mammals that North Baffin Inuit depend upon.

Baffinland wants to increase the mine’s annual output of iron ore from six million metric tonnes to 12 million tonnes. Ootoovak and Natanine say that even with the current rate of extraction, animals like seals and narwhal that Inuit rely on are skinnier and changing their behaviour.

They warn that Inuit culture could be destroyed if the expansion of the mine continues on its current course.

The meetings, as part of the Nunavut Impact Review Board’s environmental assessment, were meant to allow the mining company to answer outstanding questions about how increased activity in the area will further impact species like caribou, narwhal, seal and Arctic char.

The meetings were also meant to allow community members from Pond Inlet, Sanirajak, Igloolik, Clyde River and Arctic Bay—the five communities on northern Baffin Island most affected by the mine—to participate in the process.

The COVID-19 pandemic has meant that meetings have largely been held remotely. Technical meetings were held in mid-September via teleconference.

The community roundtable and pre-hearing conference were held in Pond Inlet, with hubs in Iqaluit, Winnipeg and Ottawa. Live video was streamed into each location.

Natanine said that from a technical viewpoint, the meetings were “pretty amazing.”

But North Baffin leaders had wanted the meetings to be delayed until they could safely be held face-to-face, without COVID-19 restrictions.

Natanine said that the fact that the meetings were held remotely at this time, against the wishes of the community members, is the sort of thing “that’s been happening since colonization started.”

These meetings were called after Nunavut Tunngavik Inc. put forward a motion last year to delay the final public hearing of the NIRB’s environmental assessment to give the mining company a chance to answer outstanding questions from community members.

The NIRB flew up technicians who set up a video conference system to livestream the meetings to hubs in Iqaluit, Ottawa and Winnipeg.

Isolation requirements for four technicians were waived in order for the NIRB to fulfil its legislated responsibilities, Karen Costello, the executive director of the NIRB, said in an email.

The technicians set up equipment in Iqaluit and Pond Inlet, and were present during the meetings, Costello said during a phone interview. 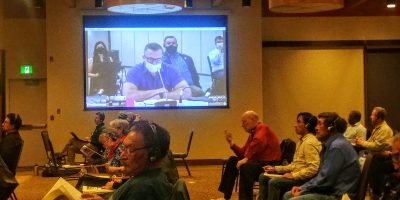 Brian Penney, president and CEO of Baffinland Iron Mines Corp., speaks from Ottawa to Iqaluit during the beginning of the community roundtables. (File photo)

Costello said, “[the meetings] were able to move forward based on the use of technology, and the ability of the current public health orders to have limited in-person gatherings.”

Representatives from the NIRB and the Qikiqtani Inuit Association, as well as community leaders and members, were present in Pond Inlet.

Along with testifying in person, Costello said the NIRB has many ways it can “solicit feedback from parties.”

“That includes through the written submission. They could have called in and listened to the proceedings through the telephone; they can also continue to call our 800 number and speak to anyone at any time to provide feedback,” she said.

Ootoovak said that many people who wanted to participate in the meetings were turned away.

“We predicted this to be happening, and it happened,” he said, saying this is a reason why he opposed the meetings being held at this time.

In an emailed statement to Nunatsiaq News, the chief executive officer of Nunavut Tunngavik Inc., Kilikvak Karen Kabloona, said that consultation processes during the pandemic “must provide for meaningful Inuit participation as required under the Nunavut Agreement.”

NTI was aware that seats would be limited during the community hearings, she said.

“NTI is taking note of the community concerns, [which are] important to the overall assessment of the consultation process.”

Next, Costello said the NIRB has 30 days to complete its pre-hearing conference report with “any type of decision” as to whether Baffinland’s proposal is ready for a public hearing to be resumed.