“Is Baffinland assuming that behind our backs NIRB or government has pre-approved the project?” 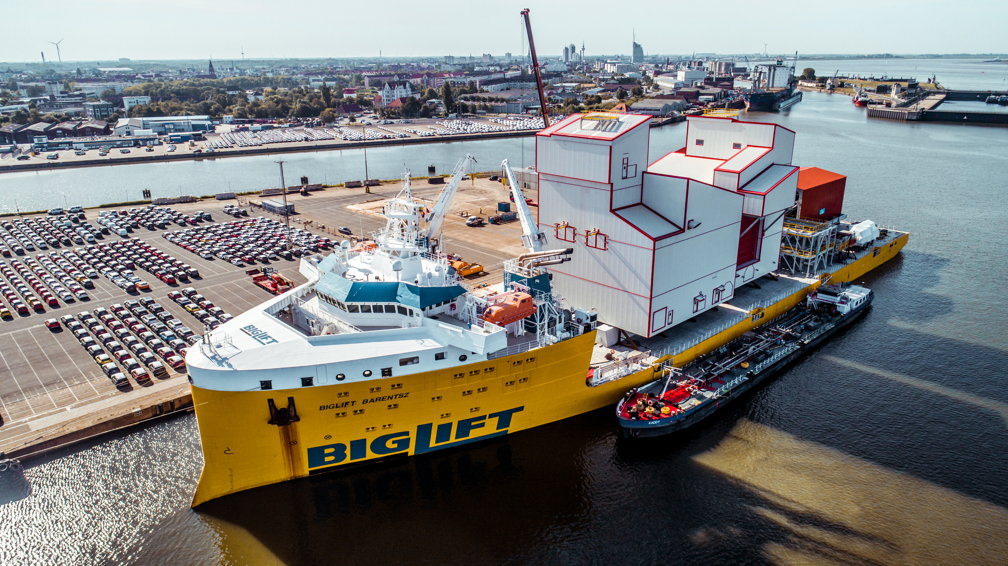 The cargo vessel Biglift Barentsz docked at Bremerhaven, Germany, last summer. On top of the deck you can see two prefabricated buildings, 33 and 34 metres high, that Baffinland Iron Mines Corp. acquired from ThyssenKrupp and shipped to the Mary River mine site this summer. Two smaller buildings sit on the aft end of the deck. They’re for use in the company’s railway-based expansion project, which regulators haven’t approved yet. (Photo © Thyssenkrupp Industrial Solutions)

Community leaders in Pond Inlet are unhappy about a massive sealift of railway materials that Baffinland Iron Mines Corp. transported to its Mary River iron mine site this summer.

They’re concerned because, to get an early start on its big railway-based phase two expansion plan, which regulators have not yet approved, Baffinland sent two huge 10-storey pre-fabricated buildings from Bremerhaven, Germany, to the company’s port at Milne Inlet on north Baffin Island this summer.

They also shipped two smaller prefab buildings and large amounts of railway-construction materials, such as tracks and spikes.

Baffinland, as early as November 2018, told regulators and its partners at the Qikiqtani Inuit Association about the shipments, through written documents buried inside the public registries of the Nunavut Impact Review Board and the Nunavut Water Board.

But people in Pond Inlet are only finding out about it now. 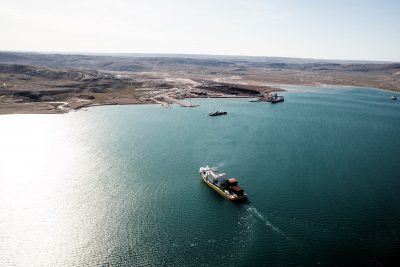 The Biglift Barentsz approaches Baffinland’s port at Milne Inlet this past August, carrying big prefabricated buildings for use in the company’s railway-based expansion. When people in Pond Inlet saw the vessel pass by their community, it was the first they had heard of the shipment. Two more vessels carrying railway-based material arrived later, and more shipments are to arrive in the summer of 2020. ((Photo courtesy of ThyssenKrupp)

“We’ve just been finding out over the past three or four weeks. We see these things [ships] passing by Pond Inlet being shipped up,” Joshua Arreak, manager of the Mittimatalik hunters and trappers organization, told Nunatsiaq News

“We wondered why and who and how they were doing that. There is no explanation whatsoever from NIRB [Nunavut Impact Review Board], QIA [Qikiqtani Inuit Association] or anyone. We were caught by surprise by this,” Arreak said.

“We have not heard from QIA or NIRB. I don’t know. It’s within the Inuit organizations that we are having problems. They are not communicating with us,” he said.

No Nunavut regulator and no federal government minister has said yes to Baffinland’s phase two expansion plan, which would see a 110-kilometre railway between Milne Inlet and Mary River, a doubling of ore production to 12 million tonnes a year, and nearly 200 voyages annually by huge ore-carrying vessels.

The project can’t be formally approved by the federal government until after a final public hearing before the NIRB that’s set to start this Nov. 2 in Iqaluit and finish up Nov. 8 and Nov. 9 in Pond Inlet.

The NIRB, which did not seek comment on the issue from stakeholders, acknowledged the early sealift of railway materials in a letter sent to Baffinland this past July 25.

The NIRB warned the company that if its phase two plan is not approved, it would be up to Baffinland to remove the materials, likely worth many millions of dollars, from the site.

They also said the sealift will not affect NIRB’s decision-making on the file.

In an email sent Oct. 17, NIRB’s executive director, Ryan Barry, clarified that there is no legal mechanism for NIRB to either approve or prevent the sealift activity.

“The NIRB was left to instead point out that these activities would continue to be included in the ongoing assessment and all related materials could be subject to removal if the proposal is not approved to proceed at the conclusion of the Board’s assessment,” Barry wrote. 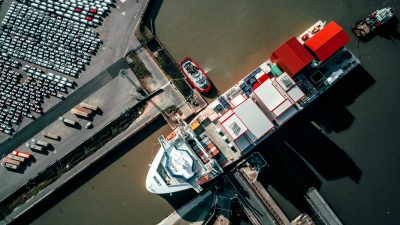 Here’s an aerial view of the Biglift Barentsz. This past summer the vessel carried prefabricated buildings to Milne Inlet for use in Baffinland’s railway-based expansion. (Photo courtesy of ThyssenKrupp)

That makes each building, part of a prefabricated crushing and screening plant, roughly equal in height to a 10-storey apartment building—likely higher than any other enclosed structure in the eastern Arctic.

But Baffinland does not yet have permission to use them.

“Baffinland will clearly mark the equipment as ‘Phase 2 only—Do Not Use’ until such a time that the Phase 2 Proposal reconsideration process has been finalized,” the company wrote last July 19 in a report to the NIRB.

In joint submissions to regulators, QIA and Baffinland say the materials would be stored on Inuit-owned land, subject to the terms of QIA’s commercial lease agreement with the company.

For Arreak and others, the process so far suggests Baffinland may believe approval of the project is already a done deal.

“Pond Inlet people are not happy. Is Baffinland assuming that behind our backs NIRB or government has pre-approved the project? I don’t know,” he said.

Frank Tester, a technical advisor to the Hamlet of Pond Inlet, received permission from the mayor of Pond Inlet, Joshua Katsak, to speak to Nunatsiaq News on behalf of the hamlet.

“Baffinland does indeed seem to have acted on the assumption that they would get approval for Phase 2,” Tester said in an emailed statement.

“Whether NIRB had any powers with regard to this matter, the net effect is to give the impression that it puts pressure on NIRB with respect to its responsibilities and saying ‘yes’ to the proposal. This is of concern,” Tester said on behalf of the hamlet.

“Technicalities aside, the hamlet is of the opinion that this should not have happened. This was clearly driven purely by financial considerations and assumptions made by Baffinland about approval for Phase 2,” he wrote.

“Our main concern is animals, the mammals and the marine environment. We would be the most affected community. That’s our concern. Money won’t bring back the animals,” Joshua Arreak said on behalf of the hunters and trappers, stating an oft-repeated message that Pond Inlet has made for years in response to the marine transport component of Baffinland’s plan.

As for the non-governmental organization Oceans North, an intervenor at the upcoming public hearing on Baffinland’s expansion plan, they say they support “responsible development” of the Mary River mine.

But they also say Baffinland may be shipping too much ore too fast without a full appreciation of its environmental impact, and they’re critical of Baffinland’s decision to ship large quantities of ore out of Milne Inlet rather than Steensby Inlet to the south, which they were permitted to do back in 2012.

“I am not surprised that community members are upset that large shipments of rail equipment have arrived at Milne Inlet in advance of regulatory approval for this expansion,” said Chris Debicki, the vice president of policy development and counsel for Oceans North.

These materials that are being shipped to Milne Inlet are part of a prefabricated railway-based material handling system that Baffinland acquired from the ThyssenKrupp conglomerate in Germany.

The two big buildings, which arrived first, were assembled in Bremerhaven, while a third structure, a rail-car unloading station, was assembled in Stettin, Poland, ThyssenKrupp said in a news release.

Baffinland has also transported a ship loader, a conveyor belt system and numerous other materials for use in a railway transportation system.

The list of materials that Baffinland filed with the NIRB and the NWB includes railway ties, bundles of rails, along with track spikes and tie plates.

ThyssenKrupp’s first shipment for Baffinland, on a vessel called the BigLift Barentsz, amounted to 5,500 tonnes of material, departing from Bremerhaven in early August.

Two more cargo ships delivered more materials this past summer, with more to follow in the summer of 2020, ThyssenKrupp said.

In a deal with QIA, Baffinland has agreed to put an extra $18 million into a reclamation security fund set aside to clean up the Mary River site if and when the project ends, NWB documents state.

An earlier version of this story contained incorrect information. The Nunavut Impact Review Board does not have the legal ability to either approve or prevent Baffinland’s sealift activities. Their letter pointed out that Baffinland carries the risk of having to remove materials from the site if the phase two expansion is not approved.