Indigenous rights bill must not die on the order paper 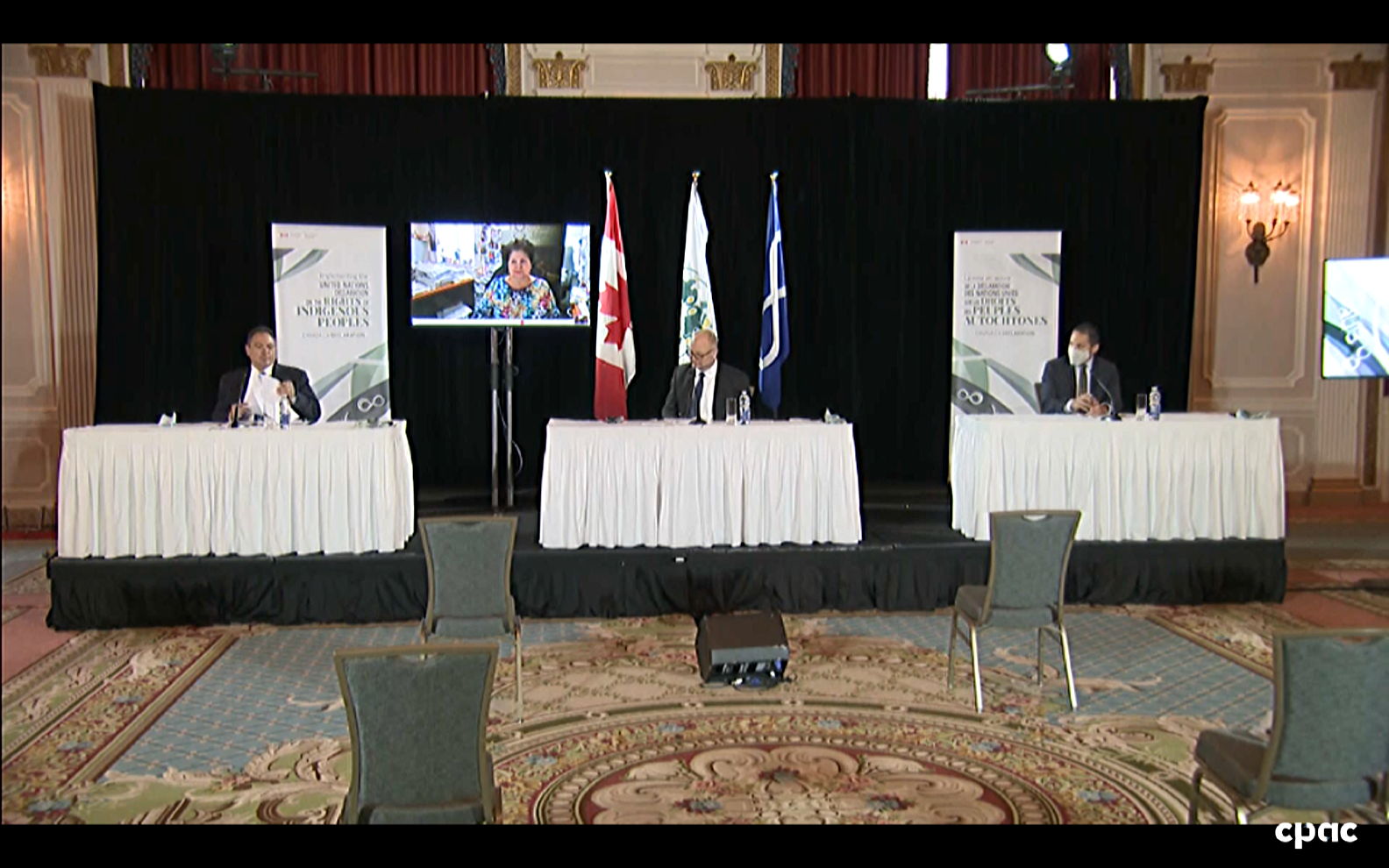 David Lametti, the federal justice minister (centre), with Perry Bellegarde, the national chief of the Assembly of First Nations (left) and Natan Obed, the president of Inuit Tapiriit Kanatami, at an event in Ottawa held Dec. 3 to introduce a proposed new law that would begin to implement the United Nations Declaration on the Rights of Indigenous Peoples in Canada. (File photo)

For the people of Nunavut, the Liberal government’s proposed new law for carrying out the United Nations Declaration on the Rights of Indigenous Peoples is more symbolism than substance.

But Bill C-15, which Prime Minister Justin Trudeau’s government laid before the House of Commons yesterday, might turn out to be the kind of symbolism that builds and heals.

In 2016, Canada gave its full support to the UN declaration, which you’ll often see represented by the ugly acronym “UNDRIP.”

But the federal government didn’t say how it would use the declaration to change Canadian law.

Romeo Saganash, then the NDP MP for the northern Quebec riding that includes Nunavik, filled that gap. He sponsored a simple private member’s bill in 2017 that passed the House of Commons and then died in the Senate before the 2019 federal election.

That’s because some Conservative senators were scared of one of the UN declaration’s big ideas: free, prior and informed consent.

That concept is often represented by another ugly acronym: “FPIC.” It means certain things can’t happen unless governments first talk to the representative institutions of Indigenous peoples and try to seek their free, prior and informed consent.

Those Conservative senators feared that putting this into Canadian law would give Indigenous people a veto over big resource projects.

But they were wrong. Bill C-15 doesn’t contain the word “veto” and neither does the UN declaration. What it does require is deep consultation and collaboration.

Besides, in Nunavut that issue likely doesn’t matter. Inuit representative institutions already enjoy — effectively — the right to free, prior and informed consent. It’s enshrined in constitutionally protected land-claim agreements, and in Inuit impact and benefit agreements with developers.

Natan Obed, the president of Inuit Tapiriit Kanatami, explained this to reporters yesterday in Ottawa.

“Canada is already doing it in many ways. So we should look to these places where free, prior and informed consent is actually happening and is being implemented,” Obed said, in a reference to Inuit Nunangat.

If there’s anything to fear, it’s the timing, because it’s highly likely a federal election might occur this spring. So it’s not impossible that, like Romeo Saganash’s bill, this bill could also be killed by the calling of an election.

Also, the Liberal government never actually promised to pass a UN Indigenous rights bill. It promised only to introduce it by the end of this year.

That likely explains why the leaders of the three national Indigenous organizations, including the president of ITK, this week called on all political parties to give speedy passage to Bill C-15.

We mentioned earlier that for the Nunavut territory, Canada’s implementation of the UN declaration is mostly symbolic. Because of the Nunavut Agreement and the duty-to-consult principle contained in multiple Supreme Court rulings, most of Bill C-15 may actually be redundant.

But symbols are important. Symbols can signify big transformations and the start of important new relationships. MPs and senators must pass this bill before Parliament dissolves.