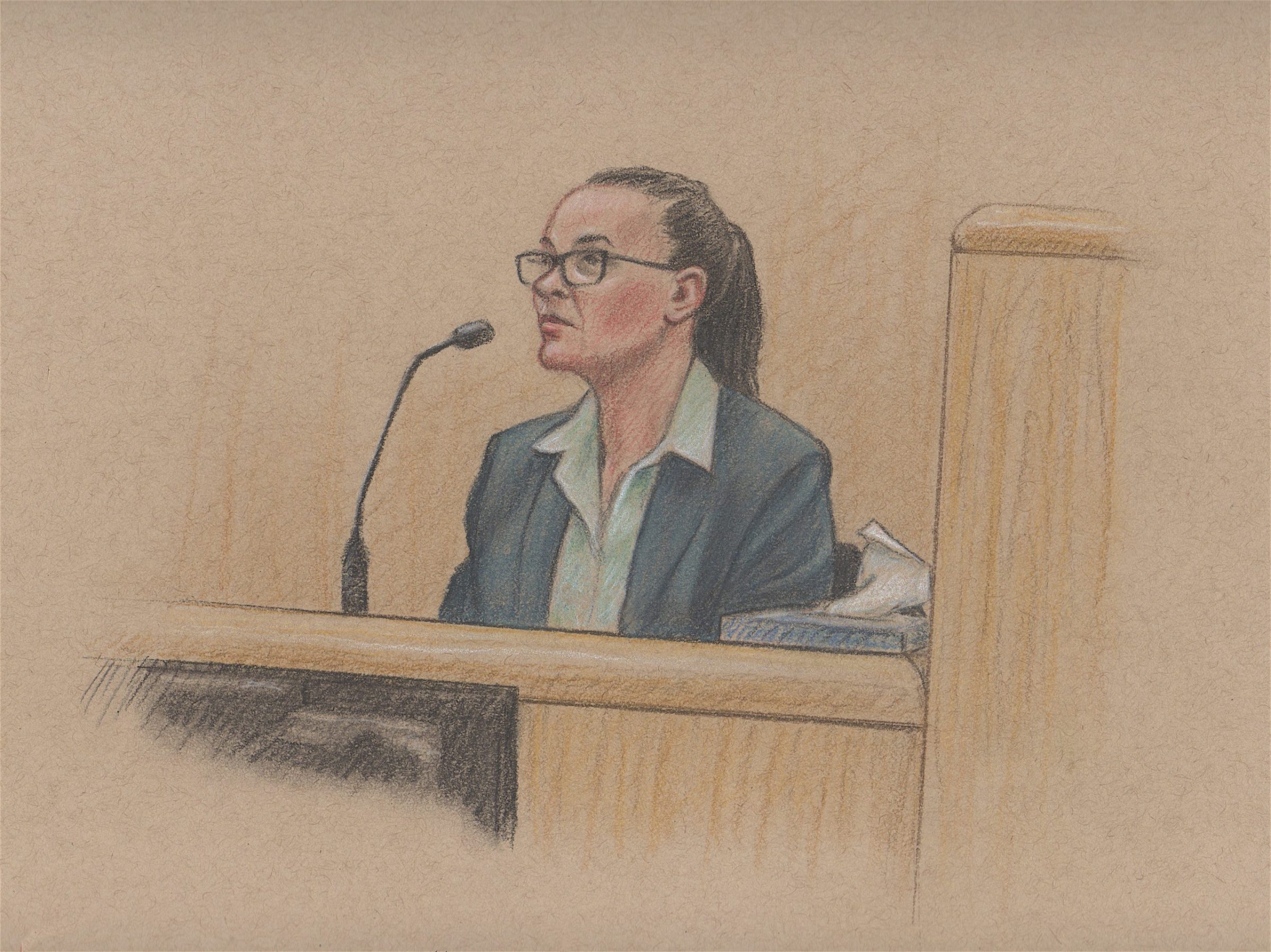 Violeta Dimova, a forensic investigator and expert in bloodstain pattern analysis, testifies in the witness box at the trial of Tyler Hikoalok in Ottawa on Tuesday. (Courtroom sketch by Lauren Foster-MacLeod)

A bloodstain analysis expert who examined the room where Elisabeth Salm was killed in 2018 testified Tuesday at the first-degree murder trial of Tyler Hikoalok.

Violeta Dimova analyzed bloodstains found at the Christian Science Reading Room at 141 Laurier Ave. in Ottawa on May 25, 2018, one day after Salm, 59, was found by a co-worker severely beaten and clinging to life in the back room of the centre.

Salm was rushed to hospital but died of her injuries on May 25.

Hikoalok, 22, of Cambridge Bay — who the Crown alleges can be seen on video entering the building at 141 Laurier Ave. around the time of the alleged attack — was arrested May 27, 2018, and charged with Salm’s murder.

He has pleaded not guilty at the trial, which started Sept. 12 and is being held in Ottawa.

Dimova, a forensic investigator for the Ottawa Police Service, testified that bloodstain analysis is the interpretation of the size, shape, location and distribution of blood stains at a crime scene in order to determine what may have caused the bloodletting.

There are three categories of bloodstains: pattern, transfer and spatter.

She said pattern bloodstains are made when gravity acts on blood droplets. This can include drip trails (when a source of blood is moving through a space and dripping blood), and pools (the accumulation of blood on a surface).

Transfer bloodstains are when an object comes into contact with a surface that has blood on it and moves the blood in some way, such as a hand touching blood and then transferring the blood to a door handle.

Spatter bloodstains are formed when a force is applied to a liquid blood source, such as a fist hitting liquid blood and creating a spatter.

Dimova testified that she observed a large saturation bloodstain, about 50 centimetres by 60 centimetres, on the grey carpet near a bookshelf.

As well, there were upwards of 100 spatter bloodstains on the surrounding carpet, lower right side of the bookshelf, the leg of a desk next to the bookshelf, on the top and underside of a round table, and on the surfaces of two small plastic chairs, one blue and one red.

The jury was shown several photographs taken by Dimova of the various bloodstains found at the scene.

Some swabs she took at the scene were submitted for DNA analysis.

Dimova is expected to continue her testimony when the trial resumes Wednesday. An expert in DNA will then take the stand in the afternoon.