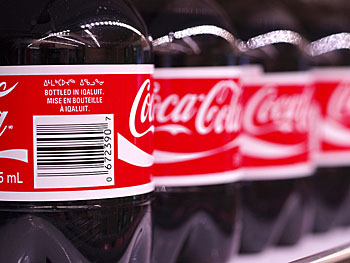 Bottles of Coca-Cola sit in a cooler at an Iqaluit convenience store Monday. Peterson and Auger, the Yellowknife firm that owns the Iqaluit bottling plant, announced the plant has closed, making these among the last batch of pop produced in Nunavut. (PHOTO BY CHRIS WINDEYER)

Say goodbye to the stubby plastic Coke bottle and the labels bearing the words “Bottled in Iqaluit” in English and Inuktitut.

Peterson and Auger confirmed Tuesday it has closed down its Iqaluit bottling plant, which churned out between 60,000 to 70,000 cases per year.

“In order to continue to produce we need to assure Coca-Cola that we can meet their quality assurance specifications,” said co-owner and general manager Roger Walker in a telephone interview from Yellowknife.

“We’ve looked at this and looked at this… We would need to put in all of this equipment and the cost of this is too high for any kind of a return.”

Walker said as many as nine people are out of work. The plants produced Coca-Cola, and Coke-owned brands like Sprite, and Canadian Dry ginger ale.

But he said there’s no risk Iqaluit will run low on pop.

“It’ll still be available but it will be in cans,” he said.

The plant, which opened in July 1995, was built to supply the whole territory to the tune of “a couple of hundred thousand cases” per year, Walker said. But Peterson and Auger could never crack enough of the market to reach peak demand and the plant’s production was sold mostly in Iqaluit.

Walker said there’s enough locally-bottled Coke to supply the rest of sealift season, but after that Peterson and Auger will supply the city’s soda demand with canned pop from a bottler in Montreal.

“The market in Iqaluit was always very strong for us with out locally produced product,” he said. But every can of Coke product sold in the capital “was one less that that plant produced.”

A spokesperson for Coca-Cola Canada Ltd. didn’t respond to an email seeking comment before deadline.