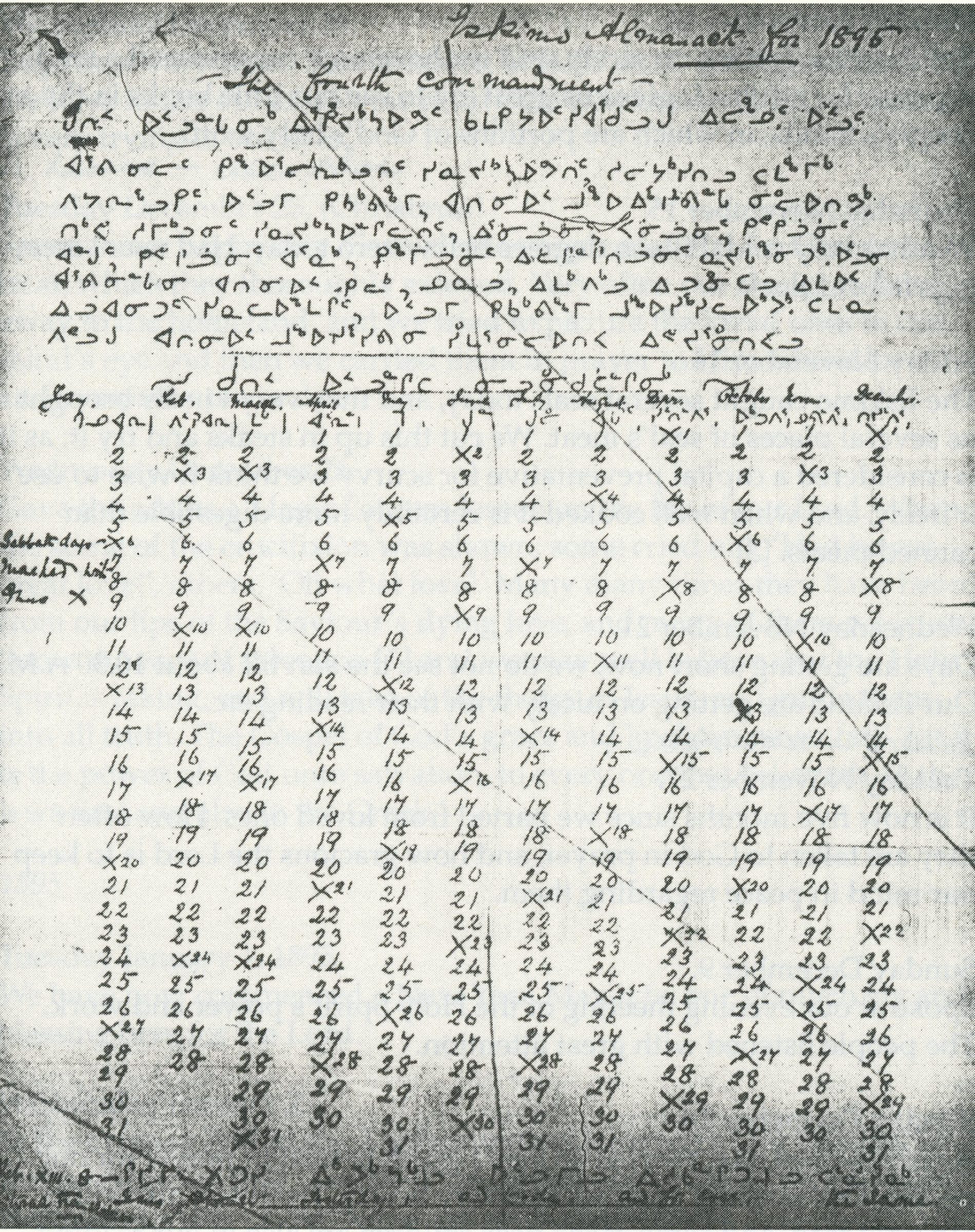 Reverend Edmund Peck prepared copies of an “Eskimo Almanack” for 1895, in effect a calendar. Sundays were marked with an x.” (Photo courtesy of Church Missionary Society microfilm, Correspondence In, 1895, Library and Archives Canada)

Calendars and the days of the week

In my last column I wrote about the Inuktitut word for Sunday. The need to identify Sunday every seventh day caused Inuit to need calendars.

Moravian missionary Benjamin LaTrobe wrote to Edmund Peck in 1899 about a visit that Peck had made to Ungava some years earlier, saying that as a result the Inuit were “eager to observe the Sabbath, counting the days week by week to the seventh day, when they rest from work.”

Early in his Quebec ministry, writing in his diary at Little Whale River, Peck anguished over the question, “Why do not the Esquimaux keep God’s day?”

Answering his own question in part, he wrote, “Some of my poor people keep God’s holy day, some use pieces of wood in the place of an almanac, upon which they make marks with their knives so that they are able to tell when the Sabbath day comes round.”

The following year he wrote of a woman, Akpahaktak, who only missed one Sabbath day while she was away from Little Whale River, and “she only failed in this instance because (having no Almanac) she lost the day.”

He didn’t provide any details on the almanacs, referring to them only as “tokens of blessing.” Fortunately, the Church Missionary Society preserves a simple Inuktitut almanac that Peck created years later at Blacklead Island.

In 1923, the trading company Revillon Frères published a small book called Igloo Life. In it they included an elaborate calendar and hunting record created by an Inuk named Kroonook. It contained an inner border representing the days, with straight strokes for weekdays and an x for Sundays, with an outer border using x for weekdays and an asterisk or star for Sundays. Inside the border were pictures of animals and fish; the numbers shown may have depicted that year’s hunting success. Other Inuit made similar records.

Mark Ijjangiaq, interviewed in Igloolik in 1991, said, “After [the Roman Catholic priest] started to live among us he made a calendar with a small typewriter he had brought with him. This was not much of a calendar [by today’s standards]. He made the letter ‘I’ for each weekday; for Sundays he marked an ‘X.’ That was the first time I had seen a calendar.… Each of the days were marked off with a pencil.… Even when people started to use calendars there were times when they would lose track of the days. When this happened they would pick a certain day that might have some significance to them and [declaring it Sunday] would resume counting the days after that until the correct [order of the days] could be determined.” 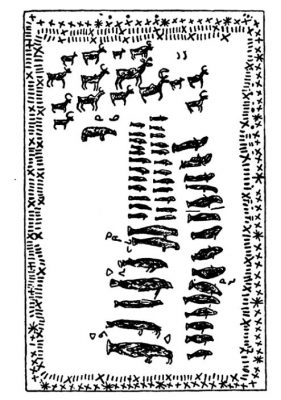 This was the calendar made by an Inuk named Kroonook, either in southern Baffin Island or in Nunavik, to keep track of time as well as record his take of animals during the year. The weeks were shown around the perimeter, a stroke marking each day and an x for Sunday. As the days passed, each stroke was crossed again to make an x, and the x’s for Sunday were crossed again to form a kind of star or asterisk. (Photo from Igloo Life, published by Revillon Frères, 1923.)

Greenlanders too had created their own calendars well before 1800. Historian Finn Gad wrote some “made their own ‘weekly calendar,’” consisting simply of a piece of wood with seven holes in it, to which they fitted a little wooden peg for each day of the week “so that they shall not mistake Sunday.”

For Anglicans, the naming of Sunday led to the interesting question of what to call the day following. Since the Sunday work-prohibition had lasted for only a day, going back to activity on Monday must have seemed to some like the breaking of a taboo. And there was a word for that. The missionary Julian Bilby wrote about it in 1923 in his book, Among Unknown Eskimo: “Those who transgress this injunction are called Nuggatyauyoot, the disobedient.” (Forgive his spelling, please.) And so the word for Monday became ‘Naggajjau’ or ‘Naggajjauq’ (sometimes ‘Naggajjaq’) to denote the time when the taboo was broken.

It too is an old word. When the historian Fabien Vanasse visited north Baffin in 1906, he recorded the word there, over two decades before the first missionary would visit Pond Inlet. Vanasse wrote: “Monday or Nagaryowvo, it comes from the first day after their holiday.”

But he did not speculate on its meaning.

For Catholics, a word for Monday was easier to coin, but it was nonetheless a mouthful. Mark Ijjangiaq gave it as “Sanattailiuraanisaaq” or the phrase “Sanattaili anigusaartillugu.”

In parts of Nunavik, it is “Alliriiqtut” – “they have finished respecting the taboo.”

For Anglicans, Tuesday became “Naggajjauliqi,” which may mean an extension of “Naggajjauq” since the original taboo period had been three days. For Catholics, Mark Ijjangiaq used the word “Piqataannguqtillugu” – “the second day after.” Vanasse wrote “Nagityowlikiyoo” and defined it as “the second day after rest.”

Many today simply use “Aippiq” or “Aippaa” (the second one) and “Pingatsiq” or “Pingajuat” (the third one) for Tuesday and Wednesday. Pangnirtuumiut used to use the word “Pingasuliqsut” for Wednesday – perhaps they still do.

Thursday is fairly uniformly called “Qitiqqut” – the middle one. It is the middle day of the week if you consider the week as starting on Monday, although it doesn’t look to be in the middle on a modern calendar which places Sunday first. But some places, like Cape Dorset, use “Sitamiq” or other versions of the word for “four,” like “Sitammituq” in parts of Arctic Quebec.

Friday, in some areas, is predictably “Tallimiq” (for example, in Cape Dorset). But in Pond Inlet, it is “Ullutuinnaq” – just another day.

In Pangnirtung it is, or used to be, “Ullurulutuinnaq” – just another bloody day. The concept of TGIF had apparently not reached the Arctic yet!

Fabien Vanasse in Pond Inlet in 1906 wrote it as “Oodlookoolooduinato” and misinterpreted it as “the day before” – he didn’t say before what. In parts of Nunavik, it was “Niritsivik” which the linguist Louis-Jacques Dorais explained as “the time when one makes someone else eat.” He explained that this was the day on which HBC employees were given their weekly rations.

One more day of the week remains, the day for Saturday. I will discuss it in the next column.