Naming Sunday – a day of rest 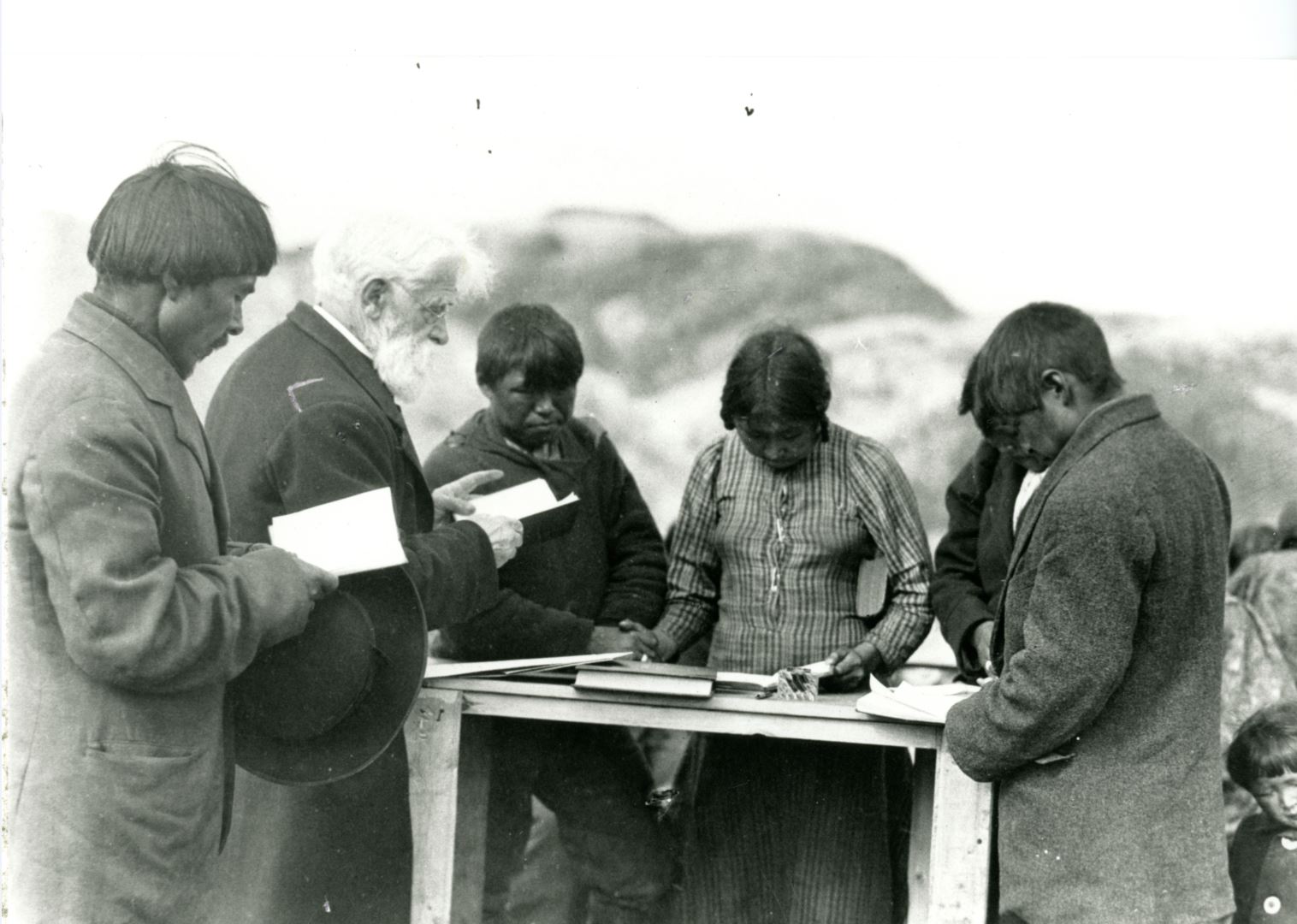 Traditionally, Inuit marked the passage of time by different names for the “moon” or month. But they had no need to mark the days of the week because there was no concept of a “week,” an arbitrary breakdown of days into groups of seven.

Perhaps no collection of words in the Inuktitut dialects of Canada shows less uniformity (and therefore more complexity) than the words that were adopted for the days of the week. Some of these differences are as a result of Inuit in different geographical areas coining new words independently for new concepts. But some differences are also because of the influence of the different Christian missionaries who brought these concepts to the Inuit. I’ll try to describe some of these words and the interesting derivations behind them. My apologies in advance for not including the words used in Labrador, the Inuinnait dialects, or some Nunavik dialects.

The explorer William Edward Parry wintered his ships twice near Igloolik in the early 1820s. On one occasion, he wrote about an interaction that involved Inuit wanting to visit the ships: “A number of Esquimaux coming before the church service we gave them to understand by the sun that none could be admitted before noon, when they quietly remained outside the ships till divine service had been performed. We then endeavoured to explain … that every seventh day they must not come to the ships, for without any intention of offending, they had become rather an annoyance in this way.”

In many areas, Inuit learned about Christianity through other Inuit rather than missionaries, who were often relatively late to arrive. With the advent of Christianity, it was necessary to mark the seventh day, Sunday.

Traditional Inuit society had been riddled with a number of taboos, proscriptions against certain activities at certain times or when specific events had happened, such as a death. The word on Baffin Island for the observance of the traditional three-day death taboo was “naattiivuq.” It is derived from the verb “naavuq” – to end, to be depleted, to run out.

Reverend Peck, the first resident missionary in what is now Nunavik, and later in Nunavut, taught Inuit a new taboo – that they must not work or hunt on Sunday. It was only for one day out of every seven, but it was a taboo nonetheless. To the Inuit, it bore a certain resemblance to the inactivity demanded by their death taboo, and so they named it “Naatiingujaarvik.” “Vik” is a suffix meaning “the time of”; “ujaar” which precedes it is a suffix showing “resemblance.” So “Naatiingujaarvik” was the time that was similar to the observance of a death taboo. Granted, it was shorter and easier to follow. This became Sunday for Anglicans.

It is an old word and may originally have been “naattiingayuq.” That’s because historian Fabien Vanasse, who accompanied the explorer Joseph Bernier to north Baffin in 1906, recorded the word there, albeit in a bizarre spelling. He wrote, “Sunday or Narzingayou, it comes from the Natives. When they have a death or a big Ankooting [from “angakkuq;” explorers often used this word for a shaman conducting a ceremony] they have a day there is no work and at a death 3 days for a grown person and 1 day for a child. This is called Narzatoo, and so they call our Sunday Narzingayou.”

White missionaries did not arrive in Pond Inlet until 1929. The custom of naming the days there may have arrived when some Christian Inuit relocated from Cumberland Sound to Pond Inlet to work with whalers in 1903.

Igloolik elder Noah Piugaattuk told an interviewer in 1991, “The concept of keeping one day a week to observe Sundays was passed from person to person.… The people knew in advance that there would be a number of days without restrictions or taboos followed by one day that should be observed — a day of abstention to be fully respected, vital to the Christian belief.” Iglulingmiut learned about this well before they converted to Christianity, and thought that “it was much easier for them to observe [this] one day. So on that account they fully respected Sunday.”

Nonetheless it was hard to live up to the expectations of the new religion. “We had to make sure that we did not bypass the day on which no work was to be done. It was hard as there were no such things as calendars at that time.”

Mark Ijjangiaq, who was Roman Catholic, interviewed three decades ago, noted that Anglicans and Catholics used different terms for the days of the week. He confirmed that the Anglican word for Sunday, “Naattiingujaaq,” meant “awaiting the passage of a taboo,” but that Catholics used the word “Sanattaili” – “day when no one should work.”

In Nunavik, a completely different word is used, but with a similar meaning. “Allitut” means “the day everyone is not to do certain activities.”

Vilhjalmur Stefansson, an explorer of the western Arctic, wrote, tongue-in-cheek, of the occasionally unfortunate consequences for a hunting society of the slavish adherence to observing the Sabbath: “When the Eskimo had learned that God had forbidden work upon the Sabbath they took the point of view that it does not profit a man that he gain the whole world if he lose his own soul, and although the catching of whales was the one thing in the world which all of them most desired, nevertheless they agreed that the loss of one’s soul was too great a price to pay.… Accordingly they would commence on Saturday afternoon to pull back their boats from the edge of the ice and get everything ready for the Sabbath observance.… It usually took them half of Monday to get everything ready for work again. In this manner they lost two days out of every seven from a harvest season of only six weeks in the year.

In the next column, I will discuss calendars and some words for more days of the week.