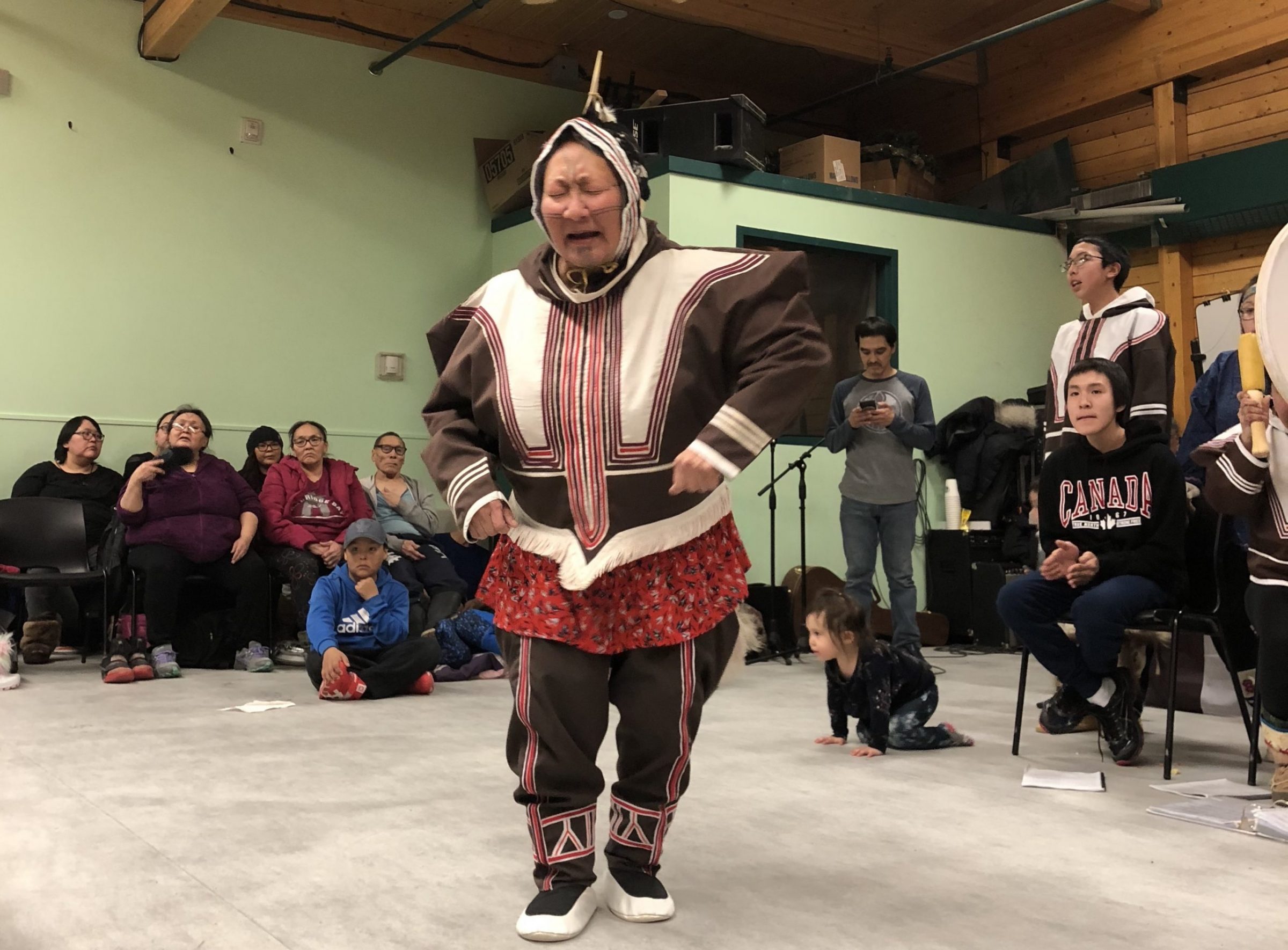 A Cambridge Bay woman who has championed Inuit culture and language through drum dancing is set to receive a national award.

The office of the secretary to the Governor General announced Feb. 25 that Julia Ogina will receive a Meritorious Service Decoration for her “leadership in protecting, promoting and revitalizing Inuit culture, traditions, and language.”

Ogina helps lead weekly drum dancing sessions in Cambridge Bay, open to residents of any age. She also shows people how to craft traditional clothing, such as the embroidered boots worn during drum dances.

She told Nunatsiaq News she is honoured to receive the award.

“The magic has begun where children and families have started to sing at home, to practise strengthening what they are learning at our weekly drum dance,” Ogina said.

Ogina said that is something the next generation of teachers will need “so they can continue to pass on (their knowledge) to future generations.”

Her interest in history and culture is longstanding – Ogina says her first memory is of attending a drum dance at her great-grandfathers house.

The songs contained in Huqqullaarutit Unipkaangit, or Stories Told Through Drum-Dance Songs, span the dialects of the western Arctic, from Ogina’s hometown of Ulukhaktok, to Taloyoak and Kugaaruk, at the eastern edge of the Kitikmeot region.

Work on the book took more than 10 years of consultation with elders who went deep into their memories to retrieve the songs, which had long been frowned on by missionaries.

In 1996, she co-authored a book with the late anthropologist Richard G. Condon, called The Northern Copper Inuit, published by the University of Toronto Press.

She says she believes music and stories are important for preserving culture.

That’s particularly so in Cambridge Bay, where Inuinnaqtun has suffered huge erosion: in 2016, only 13.8 per cent of preschool-aged Inuit children could converse in Inuktut, down by half from 2001, according to a 2019 Statistics Canada report.

“She dedicates her life to sharing her strength and passion for Inuit language and culture with Inuit of all ages, and ethnicities,” he stated in his nomination letter.

“Julia unknowingly sparks passion in many as she creates the space and time for people to engage in language and culture where they are at with her warm, and caring talents.”

Ogina was also honoured for her work promoting Inuktut in 2017 at an Inuit Uqausinginnik Taiguusiliuqtiit conference, where she received an Outstanding Achievement in Language Revitalization award, handed out each year to recognize outstanding contributions to the development and preservation of the Inuit language.

“Julia’s work has made tremendous impacts in the region,” said Jeannie Ehaloak, Cambridge Bay’s MLA, in a message to Nunatsiaq News.

“She has been instrumental in ensuring that our language, culture and heritage are preserved and passed on. It’s so nice to see young Inuit dancing, sewing and learning to speak our language. This is a well-deserved award. Congratulations, Julia.”