Can Nunavut afford to pay for political parties?

Cash-poor Nunavut could be vulnerable to sleaze and corruption 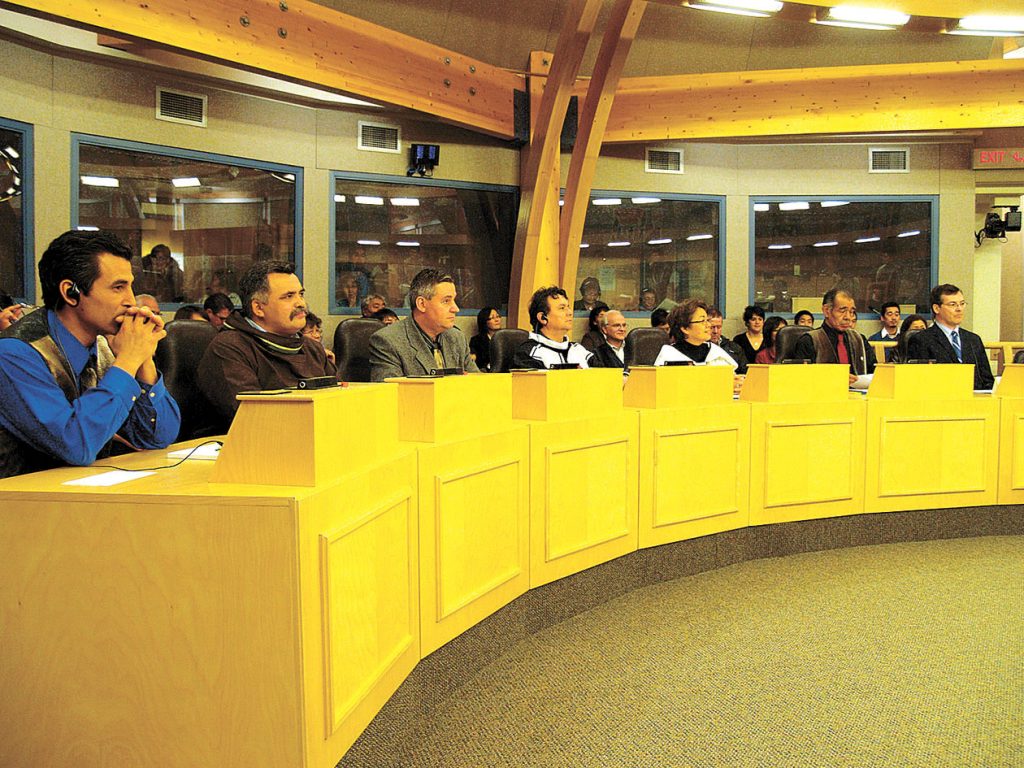 The seven-member Nunavut cabinet chosen at the start of the third legislative assembly in 2008 wait to be sworn in on Nov. 19, 2008. The assembly chose an eighth minister in early 2009. (File photo)

For those who believe Nunavut’s ready to choose a premier by way of a direct, pan-territorial public vote, instead of a vote held only among MLAs, there are likely many ways to bring that about.

The Nunavut Implementation Commission investigated the issue in 1996, and, though dated, many of their observations are still valid. You can find their report embedded at the bottom of this editorial.

But all those options would require complicated sets of changes to the rules and conventions under which the Nunavut legislature defines the relationship among MLAs, the premier and the executive council.

That doesn’t mean it can’t be done. But some believe there’s an easier way to get there.

And that is for Nunavut to encourage and embrace a system of territorial political parties.

That wouldn’t be quite the same as choosing a premier in a direct territory-wide vote. But that’s how it’s perceived, and in matters of political legitimacy, it’s often perception that counts.

For example, many Canadians likely believe that in 2015, they elected Justin Trudeau to serve as prime minister.

But they actually didn’t. They elected 338 MPs and Justin Trudeau was only one of them. He became prime minister for two reasons. One, in 2013 a private political organization called the Liberal Party of Canada chose him as their leader. Two, in 2015, 184 people loyal to that party were elected, representing a majority of the 338 seats in the House of Commons.

And it’s that Liberal majority in the House of Commons—now comprising 177 MPs—to whom Trudeau owes his job, at least until the next national election. Under the unwritten conventions of the Constitution, Trudeau governs because of their support and not because of yours.

But the party system makes people feel as if they chose Trudeau to lead the national government, and it’s that perception that matters.

Which brings us to Nunavut, where there are no legal or constitutional barriers standing in the way of a party system. So if you want to create a territorial political party for Nunavut, go right ahead. Round up 22 candidates willing to run under your party banner in the next territorial election.

But early on, you’ll run into a big problem. How do you pay for it?

In particular, how would you pay for an election campaign? How do you pay for websites, telephones, internet, posters, signs, buttons, brochures and advertisements?

Above all, how do you pay for the enormous cost of mounting a party leader’s tour throughout all or most of Nunavut’s communities?

For every political party in Canada at every level, their lifeblood is money, money given to them by large numbers of individual persons, corporations and unions.

The Yukon territory offers a useful comparison. Yes, culturally and demographically, Yukon does not resemble Nunavut. But the size of its population, about 40,000 or so, is roughly equal to Nunavut’s, and its legislature is made up of only 19 MLAs, even fewer than Nunavut’s.

The Yukon’s legislators are organized into political parties. This means their financial disclosures, released by Elections Yukon, give us a rough idea of how much it costs to run partisan election campaigns in a territory that’s roughly comparable in population size and capacity to Nunavut.

So how did Yukon’s political parties raise that money? Through donations of course—within a system that imposes very few rules.

In Nunavut, no person, business or group may contribute more than $2,500 to a territorial election candidate. Also, such donors must be based only in Nunavut. Out-of-territory contributions are forbidden.

But in Yukon, it’s wide open. For example, a Vancouver-based mining company called Copper North Mining Corp. gave the Yukon Liberals a $50,000 donation in 2016. That single donation accounts for nearly one-fifth of the party’s election spending that year.

As for the Yukon NDP, they received sizeable donations from unions: $10,000 from Toronto-based UNIFOR, $7,000 from the Ottawa-based Canadian Labour Congress and $5,000 from the United Steelworkers, based in Burnaby, B.C.

In Nunavut, all those contributions would be illegal. (They would also be illegal at the federal level, because Elections Canada now imposes a $1,600 limit on all contributors to federal parties and candidates.)

The Elections Nunavut rules, of course, apply only to individual non-partisan candidates contesting individual constituencies. The Nunavut Elections Act doesn’t regulate territorial political parties—because there aren’t any. But the Nunavut rules are clear: a $2,500 limit and no contributions from outside the territory.

There’s another reality to consider. Yukon’s population, as of December 2018, stands at 40,700. About three in four of those people, 31,800, live in Whitehorse and its various neighbourhoods. Almost all other communities are reachable by road. The only off-road, fly-in community is Old Crow, in the north of the territory.

This means that when Liberal leader Sandy Silver or Yukon Party leader Darrell Pasloski did their campaign tours in 2016, all they had to do was jump into their SUVs and drive around.

But if a political party’s election campaign in a comparatively low-cost jurisdiction like Yukon costs around $250,000, how much more would such a campaign cost in Nunavut?

We don’t know enough to be able to offer a precise estimate. But given the well-known costs of scheduled and charter air service, it’s likely much, much higher.

Elections Yukon reported that all territorial political parties in Yukon, together, received a total of $641,023.78 in revenues during the 2016 election year. So in higher-cost Nunavut, it’s conceivable that a viable three-party system could require between $1 million and $2 million in donations in any given election year.

Given the crushing poverty that afflicts Nunavut, where about half the population is dependent on subsidized social housing and, for at least part of the year, income support, where will these political contributions come from?

Party politics may not be as easy as you think. Without strict contribution and spending rules, a political party system in Nunavut could be extremely vulnerable to sleaze and corruption. No one, except those with vested interests, wants a system where big unions and big corporations, including royalty-rich Inuit corporations, could buy themselves an election.

Incidentally, a poorly designed system for the Nunavut-wide direct election of a premier would likely create similar exposure to sleaze and corruption.

In the end, it’s up to the elected representatives who run Nunavut’s public government who have to make the final decisions. But please be careful. As we said last month, look before you leap. JB