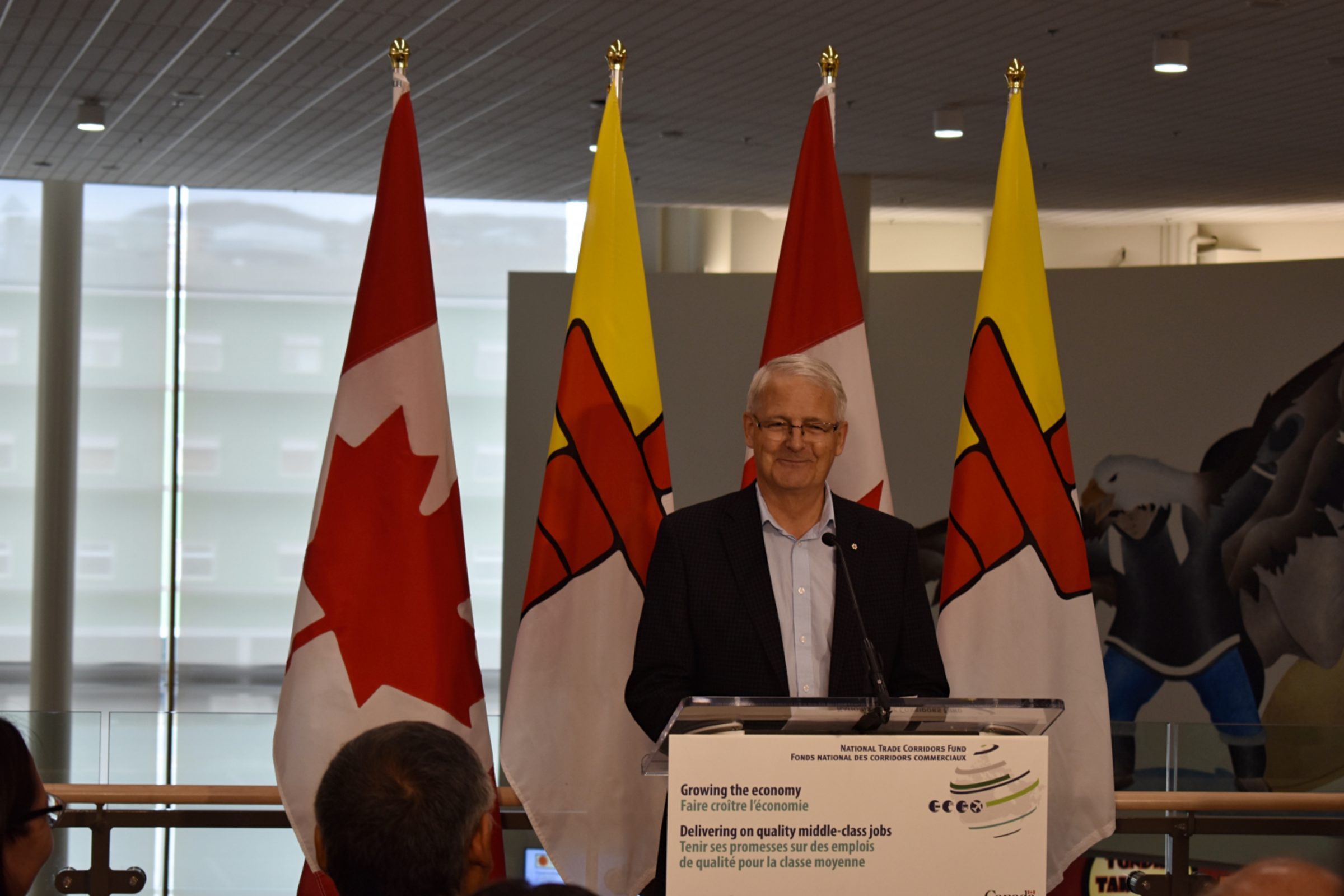 All four projects are funded through Canada’s National Trade Corridors Fund, a federal program that territorial and municipal governments, Indigenous groups, non-profits and more were invited to submit proposals to.

A northern call for proposals was put out in November 2018 and closed in March 2019.

The biggest item, proposed by the Government of Nunavut, is $45.5 million to expand the capacity of the Rankin Inlet airport terminal building to more than four times its current size.

To do this, two wings will be added to the existing terminal, Garneau said.

Akeeagok said if all goes well, the renovations will be completed in six years.

Another $21.5 million will be used to complete preparatory work on the Grays Bay Road and Port project, a proposed 230-kilometre all-season road that would eventually be part of a road connecting Nunavut to the Northwest Territories and, therefore, the rest of Canada.

That proposal was put forward by the Kitikmeot Inuit Association, Akeeagok said.

The preparatory work will consist of “field studies, including geological investigation, preliminary and detailed design, environmental assessment, as well as permitting and approvals needed before the construction of the Grays Bay Road and Port project can begin,” Garneau said.

The road would run from the site of the now-defunct Jericho diamond mine, which is located at the northern end of the Tibbit-Contwoyto winter road, to a deep-sea port at Grays Bay on Coronation Gulf.

Another $4.5 million will go toward the study and design of a 450-kilometre all-weather road that will help connect communities in the Kivalliq region.

“This will determine whether it’s a go or not a go…. We need to look at it first before we make a determination of going forward,” Akeeagok said.

“The 450-kilometre road would improve access for inland communities who currently rely on air transportation alone for goods and services,” Garneau said.

“The road would give Kivalliq communities improved access to the Rankin Inlet airport and the cargo ships that deliver supplies to the region,” he added.

When asked how long the study would take, Garneau did not have the details in front of him, but said he thought it would take a year or two.

The Government of Nunavut will also contribute 25 per cent of the funding to the Rankin Inlet airport expansion and the Kivalliq road study, Akeeagok said.

Garneau also announced the approval of Calm Air’s submission to the National Trade Corridors Fund, which will invest $195,000 to install boarding ramps for persons with disabilities at airport terminals in seven Nunavut communities.

Garneau said the projects are estimated to create a total of 200 jobs during pre-construction and construction.

“Transportation is a lifeline for northern communities and we recognize that,” Garneau said.