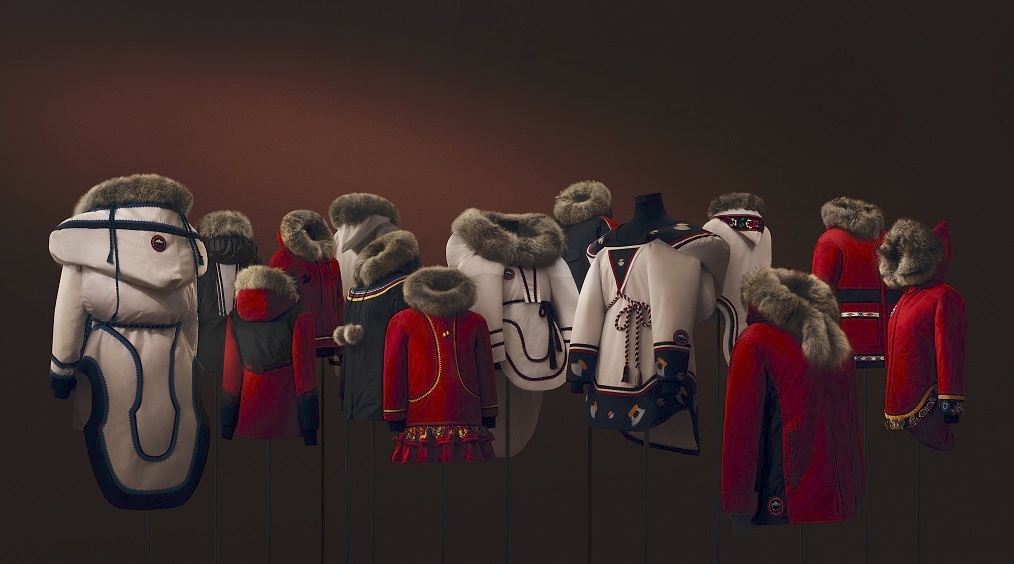 Here is a display of the 2019 collection produced for Project Atigi. For 2020, Canada Goose and Inuit Tapiriit Kanatami plan to increase the number of participants to 20 and the number of their creations to 100. (Photo courtesy of Canada Goose)

Designers will be selected by a committee comprised of representatives from across Inuit Nunangat, as well as Canada Goose and ITK, for the second edition of Project Atigi, a joint news release said on Thursday, Aug. 8.

The first group of 14 designers who participated in Project Atigi last year saw their work launched in New York City this past January.

The Project Atigi collection of parkas will be showcased again in Canada Goose stores around the world and online in early 2020.

“The talent that Inuit designers possess extends across Inuit Nunangat and the art of making parkas has been part of our culture for thousands of years,” said Natan Obed, the president of ITK, in the news release.

“By partnering with Canada Goose and expanding this initiative, it raises awareness of the incredible talent of our designers and allows us to share more of our culture and craftsmanship to the world in a way that protects and respects Inuit intellectual property and designs.”

This time around, Project Atigi plans to showcase 100 parkas made by 20 designers, from across all four regions of Inuit Nunangat—the Inuvialuit Settlement Region, Nunatsiavut, Nunavut and Nunavik.

Each designer will be commissioned to create a collection of five pieces for either men, women or children.

Proceeds from the sale of each parka from Project Atigi will be going back to Inuit communities across Canada via ITK.

Proceeds from the sale of the first collection, which you can see here, were also distributed equally among the four Inuit regions for craftsmanship and training programs, the release said.

“Project Atigi is a great example of cultural appreciation, not appropriation, said Mishael Gordon of Iqaluit, who participated in the launch of Project Atigi.

“This is an opportunity for a piece of our heritage to reach a global audience, especially while owning our own designs.”

To apply to be part of this year’s project, you must be 19 or older, live in the Inuvialuit Settlement Region, Nunatsiavut, Nunavut or Nunavik. As well, you must have an understanding of spoken and written English or access to an interpreter.

For more details and to apply, you can email projectatigi@canadagoose.com.

The committee will choose the designers, who will be notified by Sept. 20.

All original parkas created by the chosen designers must be completed by Oct. 31, the release said.

Fabric and other materials will be provided to the designers. As well, designers will be paid for their work and maintain all ownership of the rights to their designs.

Amauti designs will not be included in the collection.