Crown corporation will work to help bring project to development 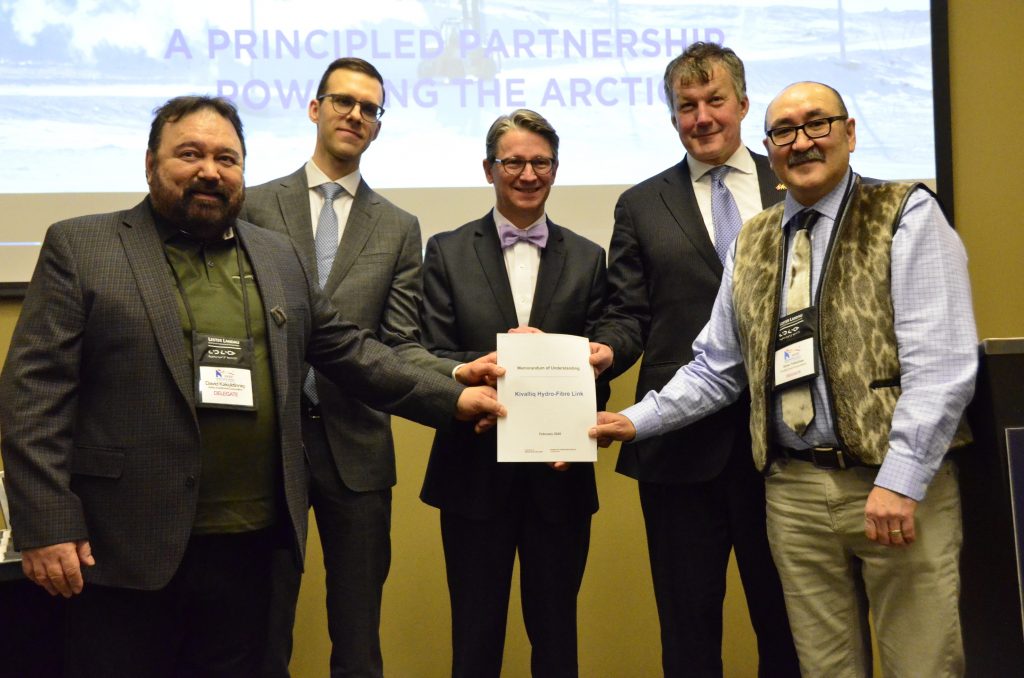 Kono Tattuinee, president of the Kivalliq Inuit Association, signs a memorandum of understanding with the Canada Infrastructure Bank that could eventually see the bank invest in a proposed hydroelectric power line and fibre optic cable project between Manitoba and Nunavut. For now, the infrastructure bank has agreed to study the project and offer advice to the proponents. (Photo by Jim Bell)

A powerful new advisor is on board with a project to get Nunavut’s Kivalliq region off diesel electricity and satellite internet.

On Wednesday, Feb. 5, the Canada Infrastructure Bank announced it had signed a memorandum of understanding for the Kivalliq Hydro-Fibre Link, which aims to bring hydroelectricity and broadband from Manitoba to Nunavut.

The crown corporation will work in an advisory role with the project’s current partners: the Kivalliq Inuit Association, and Anbaric Development Partners, which is financed by the Ontario Teachers’ Pension Plan.

The infrastructure bank, created in 2017, partners on projects with a focus on transportation, broadband technology and green infrastructure.

“This is the CIB’s ninth project, the first one to connect two jurisdictions and two priority sectors—green infrastructure and broadband,” said Pierre Lavallée, president and CEO of the Canada Infrastructure Bank, in a Feb. 5 news release.

“The CIB is excited to be part of the planning and assessment of a project focused on Nunavut’s environment and its economy.”

The plan includes a 230-kilovolt main transmission line, up to 1,200 kilometres in length, as well as a fibre optic cable.

It would run from Gillam, Manitoba, to Arviat, Whale Cove, Rankin Inlet, Chesterfield Inlet and Baker Lake. It would also connect to Agnico Eagle’s two gold mining projects in the region.

The CIB will provide its expertise to help build a business case for financing the project, and possibly play a role in financing it down the road.

The hydro-fibre line has revenue potential, which the infrastructure bank will help identify.

For example, Qulliq Energy Corp. and Agnico Eagle would purchase their power through Manitoba Hydro, but they would also pay a tariff of sorts for the use of the transmission line.

Similarly, internet service providers would buy capacity on the fibre optic cable to reach their customers.

Right now, the hydro-fibre line is in the feasibility and engineering study phase, said Clarke Bruno, senior partner at Anbaric.

Ultimately, the CIB will help bring it into the development phase.

Seeing this link in place has long been the goal of the Kivalliq Inuit Association.

A feasibility study was last done for the project in 2016. A fibre optic cable was later added to the plan to alleviate the current reliance on satellite internet.

“Inuit are proud to be driving this transformative, national infrastructure project,” said Kono Tattuinee, president of the Kivalliq Inuit Association. “Together we are creating something that will bring lasting economic and environmental benefits to Nunavut and all of Canada.” 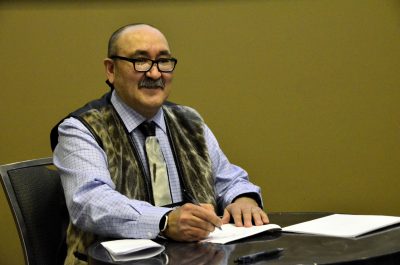 “Young people are much more acclimatized to the internet than we are. Cell phone service would go up another notch, there’s endless possibilities going forward. We’re on the cusp of endless possibilities,” said Kono Tattuinee, president of the Kivalliq Inuit Association on Feb. 5 at the signing of a memorandum of understanding with the Canada Infrastructure Bank to develop a hydro-fibre link in the Kivalliq region. (Photo by Jim Bell)

Two days before the announcement, at the Arctic360 conference in Toronto, there was a discussion of the need for alternative funding sources for northern infrastructure projects.

The conference was all about investing in the North.

There was a broad desire among the attendees—from the finance, mining and government sectors—to partner with communities on development projects.

He said that means helping to ease the reliance on government grants for funding and, instead, investing in projects with long-term payback and social benefits.

The Kivalliq Hydro-Fibre Link, as well as generating revenue, would reduce the cost of supplying energy by half for Qulliq Energy Corporation, according to the project’s website. The savings for communities once off diesel would amount to $40 million annually and $60 million for the mines.

Proponents say the link would also lower greenhouse gas emissions and ship traffic, as it would greatly reduce the reliance of western Hudson Bay communities on diesel, other than for backup use.

The fibre optic cable would bring broadband internet to the region for the first time, cutting internet costs by half and increasing download speeds by 3,000 per cent, according to the project’s website.

Through the Kivalliq Inuit Association, Inuit of the region hold a 51 per cent share in the project. Once it’s built and the Ontario Teachers’ Pension Plan is paid out for its investment, the project would be 100 per cent Inuit owned.

Tattuinee said that if the project were carried out, it would create great benefits for Inuit of the Kivalliq.

“Oh it means a lot,” he told Nunatsiaq News. “We would save 300,000 tonnes of greenhouse gases. Just imagine. No more reliance on fossil fuels, diesel, oil, and there’s the opportunity for high speed internet, which we’ve never experienced.”

For young people in particular, he said, better access to the internet will be a significant step.

With files from Jim Bell and Meagan Deuling