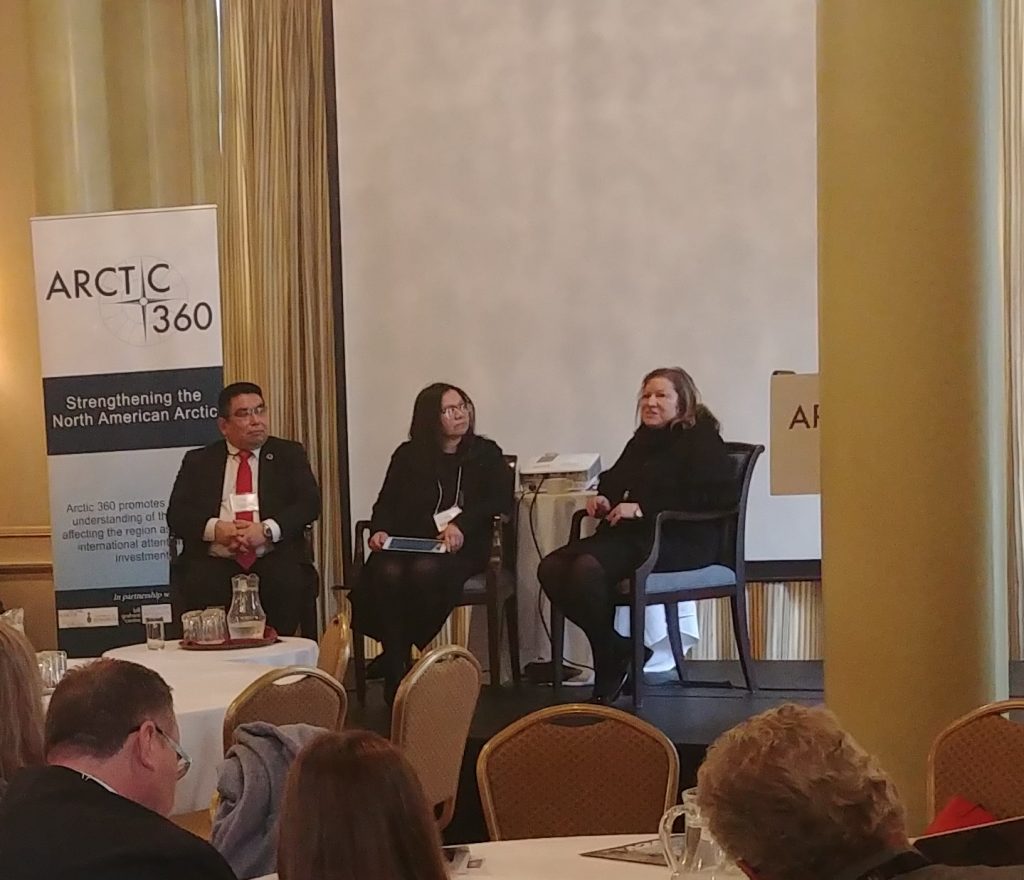 This week’s Arctic360 conference in Toronto focused on the North’s economic development potential, and the region’s need to attract big investors. From left: Vittus Qujaukitsoq, Greenland’s minister of finance and and mineral resources; Madeleine Redfern, the executive director of the northern branch of Arctic360; and Yvonne Jones, the member of Parliament for Labrador. (Photo by Meagan Deuling)

Bankers, policy-makers, mining executives and Inuit representatives gathered earlier this week in an ornate room in the University Club in downtown Toronto to talk about ways of bringing large-scale investment to the Arctic.

The intent of the Arctic360 Conference was to tell the world that people who live in the Arctic are ready to direct its growth and development.

Yvonne Jones, the member of Parliament for Labrador, said that when she looks at the Arctic today, she sees a strength she didn’t see in the past.

“This comes with a vision,” Jones said. “It’s not just about making ends meet anymore, it’s about what ends do we want to meet?”

Community involvement in attracting and directing large-scale investment was the thread that ran through the nine hours of discussion at the conference on Monday.

Large-scale investment is seen as critical; it is what the policy-makers attending the conference seek, because that is how infrastructure development will be funded in the Canadian Arctic. That includes things like deep-sea ports, roads, fibre optic lines, wind farms, mines and housing.

It’s not as if the Canadian government isn’t interested in developing the Arctic, said Madeleine Redfern, the former mayor of Iqaluit and current executive director of the northern branch of Arctic360.

She mentioned how Prime Minister Justin Trudeau wants to get northern communities off diesel and “fill the infrastructure gap.”

But, Redfern said, even if the federal government knew how to develop the Arctic, that’s something that no level of government can do on its own. That’s why she is coordinating attempts to look for other means—to learn from investors how to package opportunities available in the North that will catch their eyes. 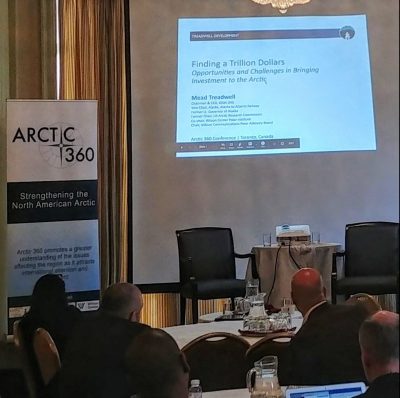 This slide at the Arctic360 Conference reads, “Finding a trillion dollars.” The intent of the conference was to teach northerners creative ways to find money for infrastructure development. (Photo by Meagan Deuling)

Southern investors are starting to pay attention. Over a catered lunch of medium-cooked steak and greens served in the conference room, Russell Read’s eyes gleam when he talks about the mineral potential in Greenland.

He’s the head of an investment company that he founded 11 years ago called C Change, and he is looking to take his company in a new direction: north. Read spoke about how institutional investors are found everywhere in North America, except the Arctic.

Institutional investors are large international organizations, like sovereign wealth funds and pension funds. But in order to even catch their interest, a project has to be worth over $100 million.

Read wants to bring institutional investors north, so he is at the conference acting as a liaison between Arctic organizations and big money.

“Part of my objective is to try and develop investment opportunities that meet the institutional quality standards,” Read said.

Three things need to be in place in order for an investment to go ahead, Read said: the technical expertise of industrial companies, involvement of government to create basic infrastructure and de-risk the investment, and significant institutional capital to make large-scale projects happen.

And the involvement of local communities is absolutely critical, Read said. “They have to be beneficiaries; they cannot be passive, and something that a project happens to.”

The way to ensure that development benefits a community, Read said, is by forming public-private partnerships between institutional investors and the government.

The Arctic is a tough sell right now, Read said. In order to take advantage of the mineral potential in Greenland, he said that opportunities need to be packaged together. And figuring out which projects can be invested in simultaneously is why Read is at the conference.

Madeleine Redfern’s experience as mayor of Iqaluit taught her to look to northern neighbours to see how they address problems in other regions, and it taught her to look for money in creative places. And that’s exactly the kind of creative thinking that Read is referring to when he speaks of “packaging opportunities.”

In order to identify projects worth over $100 million, to catch the eye of institutional investment firms, regions are going to have to work together, Redfern said. For instance, if Greenland has untapped mineral potential, how can Canada work with their government to create a project that operates in both regions?

Or, Redfern said, projects are going to have to be bundled together. So instead of trying to attract money to build a fibre optic link, combine that with a project to develop the infrastructure required to build the link in the first place.

Redfern said the next step is to take the ideas discussed in the conference room out into the world.

“You can sense that there’s not only an interest, but a rallying,” she said of the Arctic. “It’s a time not just to speak of opportunities, but to make these opportunities happen.”