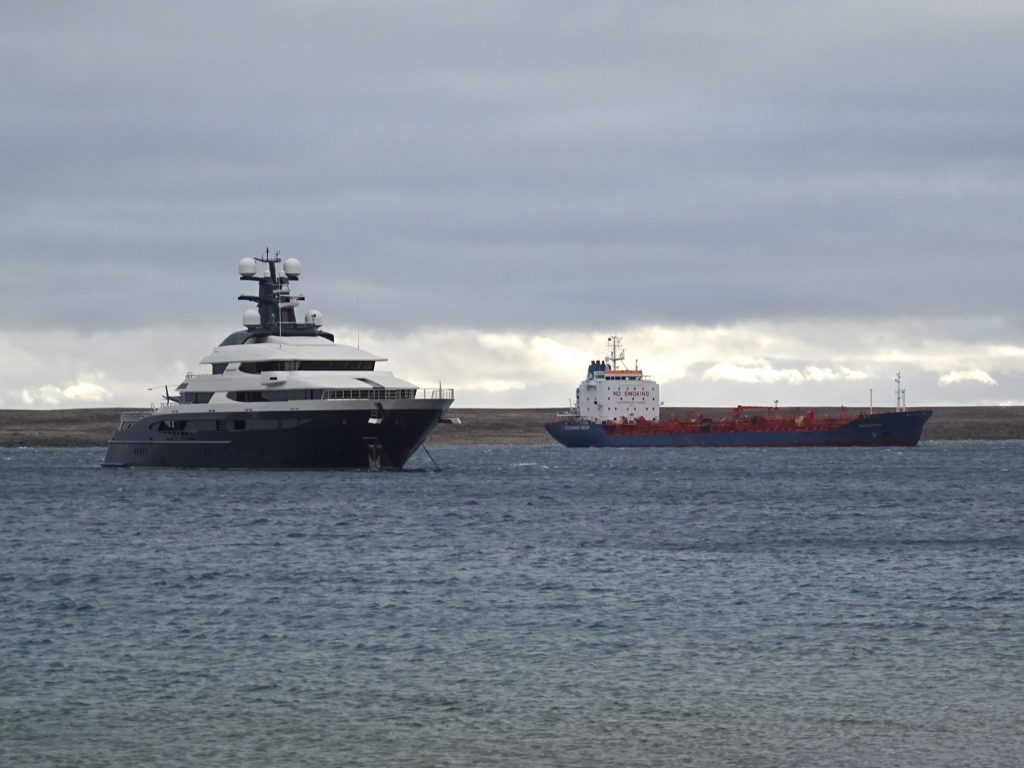 Every August, the western Nunavut community of Cambridge Bay sees yachts, cruise ships and cargo vessels trying to transit the Northwest Passage. Through the Enhanced Marine Situational Awareness initiative, the community has a clearer picture of just who is on their waters. (Photo by Jane George)

By this spring, western Arctic communities will have a better handle on just who is passing through their waters.

From a geofence that creates two virtual gateways to the Northwest Passage to tracking systems that follow hunters and record their observations along the way, much more of the Arctic will be on the map.

“I can go back in time, go back to August 22 and see all the ships that were in our bay,” Beverly Maksagak, manager of the Ekaluktutiak Hunters and Trappers Organization in Cambridge Bay told Nunatsiaq News. “Whatever date they were travelling, I can see that.”

That’s due to a partnership among 10 Indigenous organizations and the federal government on the $62.5-million Enhanced Maritime Situational Awareness, or EMSA, initiative.

“Our community wants to protect the Northwest Passage,” Tyrone Raddi, marine coordinator for the Tuktoyaktuk Community Corporation, told a packed room at the ArcticNet Science Meeting in Halifax in December.

He and Maksagak spoke about the EMSA initiative alongside Nunavut Tunngavik Inc., whose own marine monitoring program is expanding in eastern and western Nunavut.

In January, the northern leads on the EMSA project were hopeful they’d see better connections via satellite for the upcoming shipping season.

“Us and Cambridge Bay have a bit of a slower time with the system because of the satellites that orbit the North,” said Raddi. “On ours, within about two to four hours we’ll get a new signal. In Vancouver, they’re getting signals every 10 minutes.”

Frédérica Dupuis, a spokesperson for Transport Canada, confirmed a “Government of Canada procurement process is currently underway that should improve existing satellite coverage of Canadian and global maritime traffic.”

But even without the speed of some southern systems, Raddi said the program has proven beneficial.

“It’s very big for us. I’ve had to use it already to investigate one ship that stopped and interfered with a group of hunters from Aklavik. They didn’t have permission to go on our lands—it was not in their travel plans,” said Raddi.

“We were able to confirm where they stopped, that they did interfere with our hunters.”

Already, the success of the one-year EMSA pilot project has seen it extended to three years. This was necessary in the North in particular, Maksagak said, since the open-water season lasts only a few months.

With funding from the program, which falls under the federal government’s Ocean Protection Plan, the two Arctic communities have purchased InReach communication devices that can be taken out by hunters who don’t already have one of their own.

And a ground Automatic Identification System, or AIS, transceiver has been purchased and set up in Tuktoyaktuk and another is on order for Cambridge Bay.

These transceivers pick up the signal of any ship with an AIS on board. These devices are required for all ships over certain thresholds: for example, if it is over 300 tonnes or carrying more than 12 passengers.

And last year, a geofence was created under the EMSA program to alert the communities to any ships passing through the southern route of the Northwest Passage.

The virtual boundaries are set just outside Kugluktuk in the west and Gjoa Haven in the east, said Maksagak. Anytime a vessel crosses these, she receives an email alert.

If the vessel has an AIS on board, she’ll also receive the ship’s data, like its name and tonnage.

EMSA also includes a dynamic mapping program, developed by Fujitsu Canada, to organize and store all of the information gathered through the various marine monitoring programs.

“This web-based system can be used on computers, smart phones and tablets to display, in a user-friendly way, a range of maritime information such as vessel traffic, hydrography, weather, as well as other key information,” said Dupuis.

That information comes from several federal agencies, including Environment and Climate Change Canada, the Department of Fisheries and Oceans and the Coast Guard. Ice data is input by the Canadian Ice Service, said Raddi.

And the program is built to be customized by users, who can add their own data to the map.

Already, layers of digital maps covering the western Arctic are being populated with the tracks of hunters. Their observations are marked along the way, providing useful information for wildlife monitoring.

“For example, there are beluga and narwhal layers, so you can see where they go in summer months,” said Raddi.

He preloads layers onto a tablet for hunters, so when they’re out on the land, they can add notes to that layer. The EMSA project in Tuktoyaktuk is a collaboration between the Tuktoyaktuk Community Corporation and the hunters and trappers association.

In Cambridge Bay, Maksagak said use of the system is steadily growing.

“We’ve only just started doing this around August because we had really high winds all the time so hardly anyone was going out too far by boat,” said Maksagak. “Now, we have some good markings from the guys going out since November.”

She’s planning to get a computer screen to mount in the hunters and trappers office so community members can come in and see the locations of hunters.

Just the day before she spoke to Nunatsiaq News, Maksagak had tracked a hunter across Coronation Gulf whose return was delayed.

“He has a cabin out there and he was waiting for his fellow travellers, so he waited out at the cabin, bunkered down and headed home in the afternoon,” she said. “We can see him make trails and see he’s moving once he puts his InReach on.”

In Tuktoyaktuk, Raddi ordered 20 AIS devices for use in the community, 12 of which have been affixed to community members’ boats.

“With my ground AIS unit, as long as the boat is within 80 kilometres of my station, I can follow it in real time, when it’s turning, how fast it’s going,” said Raddi.

As well as for monitoring larger vessels, he said it gives hunters using the equipment a certain amount of security.

All of this has been a learning experience, said Raddi, and the program is constantly growing.

“We’re trying to enhance the system as best we can with the weekly meetings,” said Raddi.

“Transport Canada has been very good to work with throughout the whole process. They’re respecting our privacy, our information is not being shared. We just want to keep adding and adding different layers to our map.”