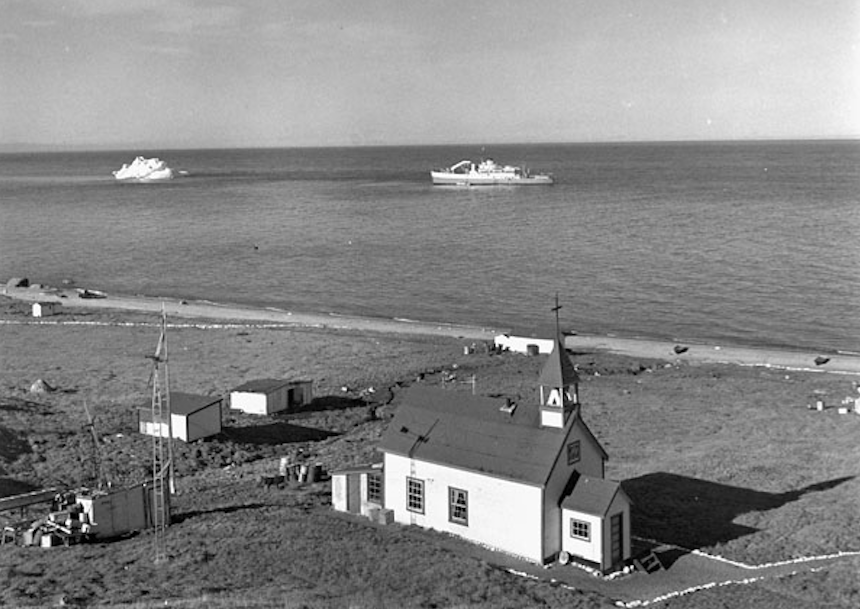 An aerial view of the Roman Catholic church in Pond Inlet with the CGS C.D. Howe seen anchored offshore. (Library and Archives Canada)

Shortly before the first-ever National Day for Truth and Reconciliation, Canada’s Roman Catholic bishops are committing to a funding “target” of $30 million to address trauma caused by residential schools.

Bishop Raymond Poisson, president of the Canadian Conference of Catholic Bishops, stated in a news release “there was universal consensus that Catholic entities needed to do more in a tangible way to address the suffering experienced.”

The money will go towards initiatives run by churches at the local level in “every region” in the country and will include First Nation, Métis and Inuit populations, the release states.

Bishop William McGrattan, the vice-president of the organization, said it’s important to “not speak about Indigenous People without speaking with them,” in the release.

Local leadership will be a key part of deciding which programs are best to fund, he said.

More detailed timelines and a strategy are in the works for November, according to the release.

“Many Catholic religious communities and dioceses participated in this system, which led to the suppression of Indigenous languages, culture and spirituality, failing to respect the rich history, traditions and wisdom of Indigenous Peoples,” it stated.

“We acknowledge the grave abuses that were committed by some members of our Catholic community [including] physical, psychological, emotional, spiritual, cultural, and sexual.”

One of the commitments listed in the apology is to “educate the clergy.”

A group of Indigenous survivors, elders and youth will meet with Pope Francis in Rome this December so he can determine how to support a renewed relationship with Indigenous Peoples, the apology states.

The Truth and Reconciliation Commission calls for an apology from the Pope on Canadian soil.

In recent months, the Catholic church has come under fire for not raising the money for residential school survivors it promised.

For example, over the summer CBC News found the Roman Catholic Diocese in Saskatchewan’s capital city gave only $34,650 to residential school survivors while spending over $28 million on a new cathedral.

Across Canada, only $4 million was donated after $25 million was promised by the church in the Indian Residential Schools Settlement Agreement.

CBC News found the organization was able to find a legal loophole to keep them from having to pay up.