Chasing the Atlantic cod with PISUNA

Part 2 of 3: Inuit-led climate stewardship program is example of applying traditional knowledge amid the sea of western science from the Arctic 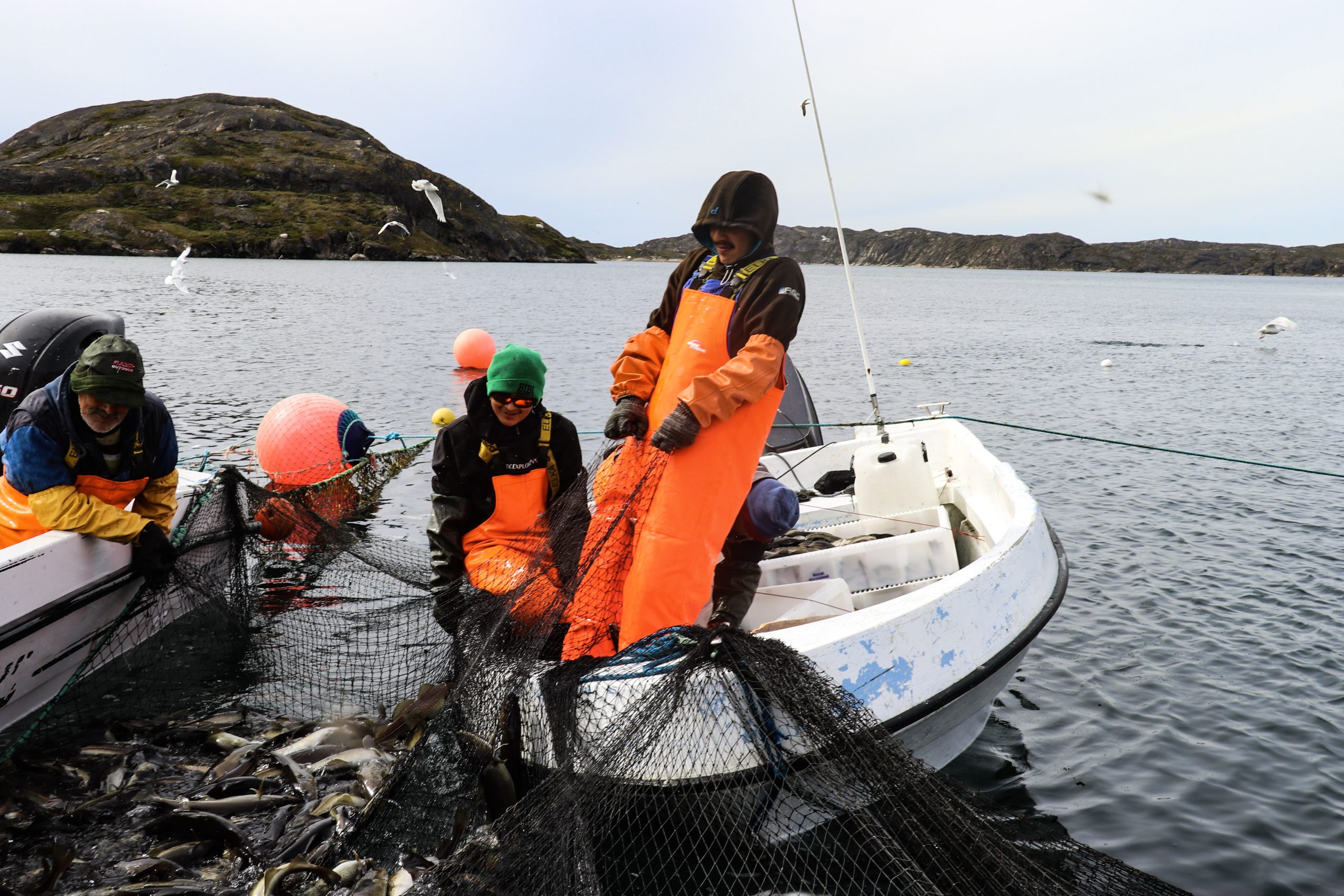 Fishermen who are part of the PISUNA climate stewardship program in Attu, Greenland, are monitoring a key species around their island — the torsk, also known as Atlantic cod. (Photo by Meral Jamal)

As co-ordinator for the Inuit-led climate stewardship program in Greenland, Jakobsen travels across his community of Attu, population approximately 200, with six local hunters and fishermen who are part of the team.

One of the key species they monitor is torsk, also known as Atlantic cod. To catch them, the team has nets placed around the island of Attu.

While they collect cod to sell to the local fish factory as well, they only take the older ones, which are 40 centimetres or longer.

“There are about 15 to 20 boxes,” Jakobsen says. He visits the nets placed by Karl Marcussen, who is part of the PISUNA team.

“They have already filled around six to 10 boxes. But they only took ones that are arm’s length and up. The rest is too small.”

In previous years, Jakobsen said, they could fill a minimum 40 boxes of cod at that location. Now they have to go out farther to find them — another sign of the impact of climate change.

After they’re done, they clean the torsk in the water, leaving behind some of the remains for the birds.

It is a way of giving back to nature some of what they have taken from it. 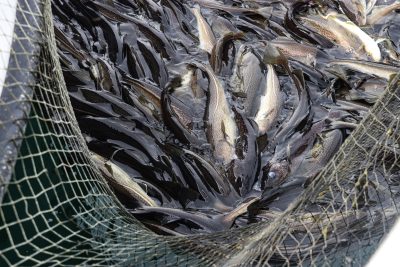 The PISUNA team have nets placed around the island. Each summer, they monitor how many Atlantic cod are caught in them every day. They also gauge which ones are old enough to sell to the local fish factory. It is a combination of monitoring changes to the local wildlife and environment, and relying on both for their livelihoods. (Photo by Meral Jamal)

Wealth of traditional knowledge from the Arctic

In 2009, the Greenland government began launching PISUNA projects in 12 communities. In Attu, it was started in 2013.

The goal of the first Inuit-led climate stewardship program in the Arctic was simple: to monitor the local wildlife for evidence of the effects of climate change, while ensuring sustained livelihood for local Inuit.

It aims to strengthen the capacity to monitor those resources while sharing the information at the local and national levels.

For people like Jakobsen who live in the North, it’s an urgent matter: as the climate changes, they are seeing a decline in some fish stocks and have to travel farther to catch them.

Climate change is affecting their land and their livelihood.

In Attu, the PISUNA team meets every three months. They discuss the changes they have detected, such as wildlife populations that are rising or declining, and adjust their own hunting and fishing practices accordingly.

They’re also creating a database for others to use, documenting everything according to the changing seasons.

Yet, beyond their community the team sees little support for their work.

They feel their traditional knowledge is not taken as seriously either globally or by the Greenland government.

They believe that’s why from the 12 communities where PISUNA was launched nearly 15 years ago, it remains active only in Attu.

“The statement that I have heard is that [PISUNA] sends people that have no learning behind [them],” Jakobsen says. 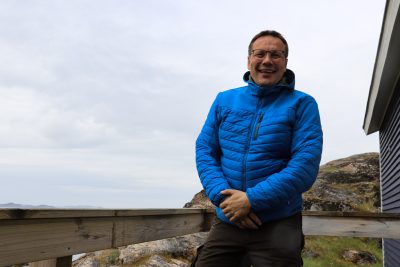 Greenland’s Minister of Infrastructure Erik Jensen was in Attu. He recognized PISUNA’s importance locally and internationally and called the community a “role model” for its work. (Photo by Meral Jamal)

Greenland’s Minister of Fisheries and Hunting, Karl Tobiassen, who was part of PISUNA when it was launched in Attu in 2013, was contacted for this story but did not respond.

Erik Jensen, the country’s minister of infrastructure who was in Attu at the time, said he recognized PISUNA’s importance locally and internationally, but was unclear on how data collected by the program is seen and used within government.

“Attu is a role model and this project should also be implemented in other locations because it is important to note and write down different things, where they have caught different things. That way it can also contribute exactly to sustainability,” he said.

“It is so important in so far it allows them to be self-sufficient with regard to fishing and hunting, so in fact they have an important role to play.” 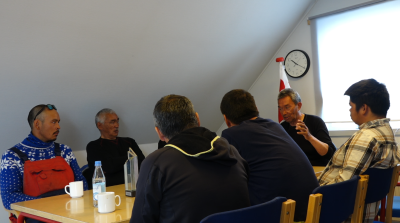 The PISUNA team, pictured here at a group meeting in Attu in July, creating a database on changes to the local wildlife and environment for others to use. But beyond their community, they are seeing little support for their work. The team feels their traditional knowledge is not taken as seriously globally and by the Greenlandic government. (Photo by Diellza Murtezaj)

Conversations about the divide between traditional knowledge and Western science — especially in policymaking — are not new, according to Nicole Schabus, an associate professor at Thompson Rivers University in British Columbia, whose work is focused on covering environmental negotiations internationally.

What’s different is how they play out across Indigenous climate initiatives, and how this determines the success and sustainability of climate stewardship programs like PISUNA.

Asked what needs to change for the scientific community and policymakers to consider traditional knowledge important, Schabus said it all comes down to a shift in “consciousness.”

For Inuit and Indigenous-led climate stewardship programs — for Indigenous traditional knowledge — to be valued equally, she said, cultures around research and policy-making must change.

“It’s the biggest problem with scientists — a lot of them actually want to work together with Indigenous people,” Schabus said.

“It’s the bureaucrats who are not taking [traditional knowledge] into account, who are just falling back and it’s all still stuck in Western ways of thinking.”

Schabus said traditional knowledge needs to be valued equally, and in some cases given more weight than scientific research, because it is more comprehensive.

A big deterrent, however, is the fact that policy-making, especially on climate change, is usually carried out between nation states.

“It’s not just personal lived experience, but it’s intergenerational experience. Indigenous peoples in the whole of Canada hold the baseline data and hold the most long-term data about their respective territories,” she said.

“But obviously, these negotiations are nation-state run. So as soon as we now get into the detailed negotiations, Indigenous voices are not heard as much as they should be.”

For more effective climate action, stewardship and policies, Schabus said, environmental policy-making and negotiations will ultimately be most effective if they “hold Indigenous voices at the centre.”

Read Part 1 in this series: Attu: Climate change and Inuit resilience in the Arctic

This feature was written as part of the Nordic-Canadian Fellowship in Environmental Journalism through Nordic Bridges, an initiative by the Harbourfront Centre, Toronto. It is the second of three stories that hope to explore the challenges and successes experienced by Inuit-led climate stewardship programs in Greenland and Canada.