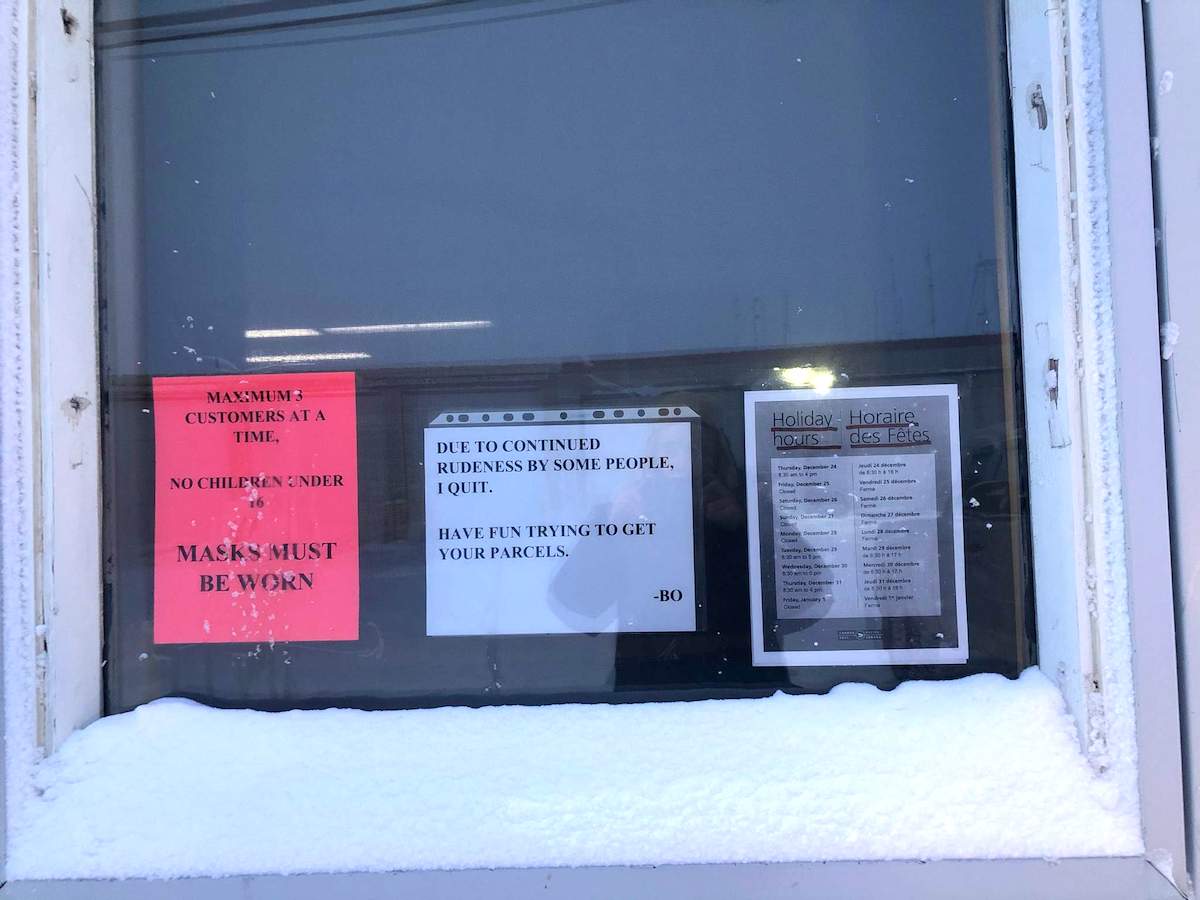 People in Cambridge Bay who stopped by their local post office on Monday afternoon were met with a locked door.

Pasted on the inside of the window was a sign from their postmaster. It stated, “Due to continued rudeness by some people, I quit. Have fun trying to get you parcels. Bo.”

Postmaster Bo Wallenius, who had worked at the Cambridge Bay Post office for 11 years, posted the sign Dec. 14 before he and the other full-time employee, Jim Patterson, quit.

He said when he posted the sign he was so angry he was “vibrating.”

“I have put up with racism and other remarks and been accused of theft, taking people’s mail and things of that nature for 11 years. I decided I had enough,” Wallenius told Nunatsiaq News on Monday evening.

He said the stresses of his job became even more acute during the pandemic. While Wallenius always wore a mask, some coming into the post office refused.

“We posted a sign saying everyone must wear a mask and some people were laughing about it,” he said.

At the same time, Wallenius was dealing with more mail. Online orders were increasing in the hamlet of 1,800. Sometimes, the post office would get 300 to 500 parcels per day.

“It’s crazy. We regularly run out of space,” he said, adding post offices are dealing with the same thing across Canada.

“This is not unique to Cambridge Bay.”

Both Wallenius and Patterson have informed their managers and union representative about their decision to quit.

Xan Moffatt-Toews, the president of the Alberta, Northwest Territories and Nunavut Branch of the Canadian Postmasters and Assistants Association, knows Wallenius and praised him for his dedication to his job.

What Wallenius said he has experienced in Cambridge Bay is not unique, she said.

“We’ve always had aggressive customers, but nothing like we’ve had since COVID,” said Moffatt-Toews.

“This is not just isolated to Cambridge Bay only — the aggression from customers to workers has gone up 98 per cent.”

There have even been instances of violence against postal workers, she said.

Dale LeClair, the director of Indigenous and Northern Affairs at Canada Post, stated in an email that he is being briefed on the situation and working “to ensure that we have uninterrupted mail operations in the community.”

“Further, we will review and analyze the situation to ensure that staff well-being is addressed,” LeClair said.