General plan intended to be a guide for how the city will develop; document expected to be approved later this year 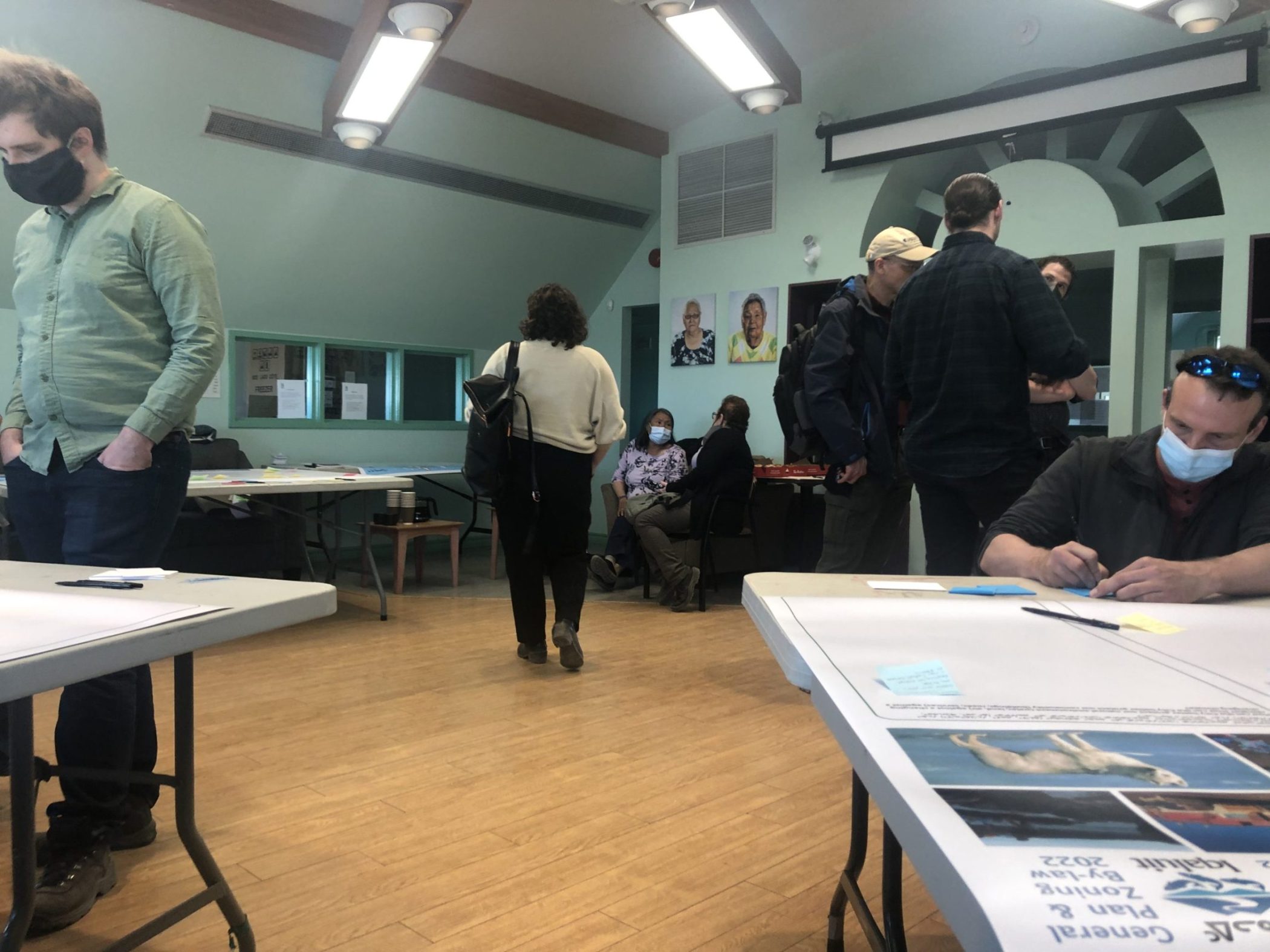 Residents gather to write down their opinions on what the City of Iqaluit’s next land-use plan should address. Another open house is on June 9 at the Aquatic Centre from 6 to 8p.m. (Photo by David Lochead)

About 10 people scanned through pictures and written questions that were placed on tables at the Elders’ Qammaq on Wednesday night, for the City of Iqaluit’s first of two open houses as it prepares a new general plan.

Among them was François Fortin, head of Iqaluit’s Aniirajak Ski and Adventure Club, who said he came out to talk about why his club needs to secure a permanent land use permit.

When complete, the city’s next general plan will outline a vision for how the community will grow and develop over the next 20 years, according to the municipality’s website.

It will essentially be a decision-making guide for city council and staff to address a range of issues such as housing, infrastructure, and protection of the land.

Through zoning bylaws, it will also designate lands for different purposes, such as residential, commercial, or open space where the land is protected from development.

It will be supported by policies to ensure each land’s designation aligns with the city’s vision, whether that’s on how to manage water and sewage, or how and where to encourage new commercial business.

A second open house for Iqalummiut was held Thursday night.

Republic Urbanism, an urban planning consultancy, organized the open houses and is gathering information to provide to the city as the municipality works its way through the new plan.

For Fortin, his ski club’s temporary land use permit is becoming untenable.

The club is growing in popularity and a cabin will help meet the growing membership demand, but that can only be done with a permanent land use permit, he said.

“It’s a very insecure position for us,” Fortin said.

For Sandi Chan, who has lived in Iqaluit since 2013, lack of public washrooms is an issue she wants to see resolved.

As an example, she cited the scenario of waiting in line at Canada Post with no access to a restroom. It’s not up to Canada Post to provide that service, she said, so if there was a public washroom nearby “that would be really helpful.”

Through the first hour of the open house Wednesday, few if any Inuit dropped in, even though Inuit comprise approximately half the city’s population, according to the City of Iqaluit’s website.

More consultation events will be held if the city’s population is not represented well enough in the initial gathering of information, said Michelle Blom of Republic Urbanism.

City council is expected to approve a new general plan for the municipality by November, according to the city’s website.