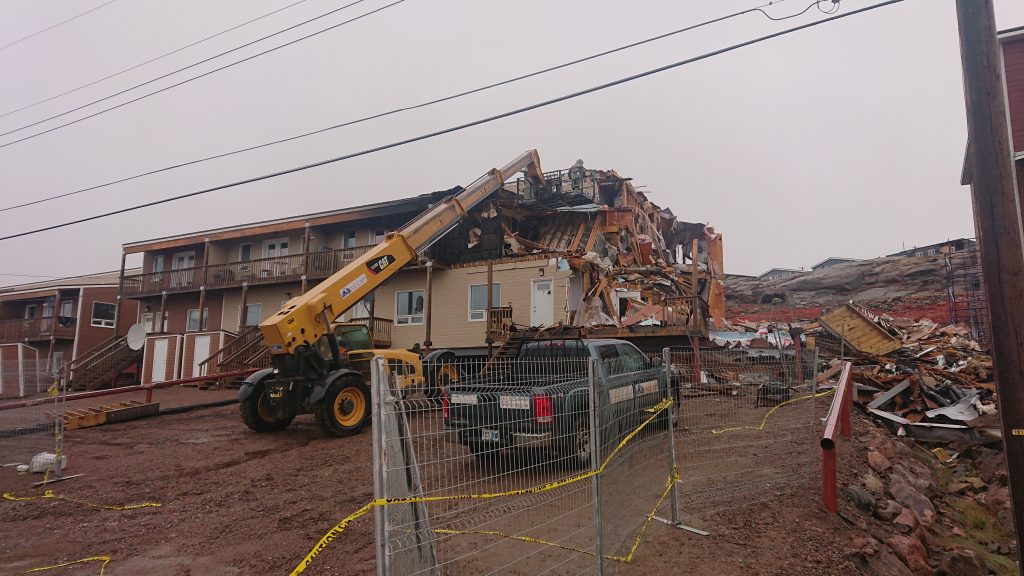 The site of the June 30 fire that consumed nearly half of a residential 10-plex in Iqaluit is inspected by Nunavut Construction Corporation staff on Friday, Aug. 30. (Photo by Thomas Rohner)

Cleanup of a June 30 fire that consumed nearly half of a residential 10-plex in Iqaluit is finally underway.

An excavator and two pickup trucks with Nunavut Construction Corporation logos appeared at the site of the fire in the Lower Plateau neighbourhood on Friday, Aug. 30.

That’s two months after an early morning fire broke out on June 30, destroying four of the 10 units.

That’s also one day after Nunatsiaq News submitted a media request to the City of Iqaluit for information and posted on Facebook about debris from the ruins of the fire blowing around.

The units are considered condos, and are managed by a condo association made up of the units’ owners.

“The City has been in contact with the president of the condo association and has been advised that the fire scene should be secured starting today,” Iqaluit’s Chief Administrative Officer Amy Elgersma told Nunatsiaq News in an email on Friday, Aug. 30.

But the remnants of the fire are still not fully secured from public access. A six-foot fence of thin metal partitions has surrounded the front of the building since shortly after the fire. One side of the ruin is blocked by four-foot plastic fencing that blows with the wind. The other side is blocked by wooden sawhorses. 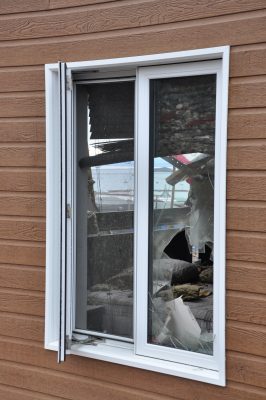 A smashed ground-floor window is easily accessible, though a guard has been present 24 hours a day for most days since the fire. (Photo by Thomas Rohner)

Smashed windows are accessible at ground level at the back of the building. A vehicle with a guard has sat on the lot 24 hours a day for most days since the fire.

All 10 units have stood vacant since the fire. An owner of one of the units said Nunavut Holding Inc., owned by Iqaluit businessman Allan Mullin, was hired by the condo’s insurance company to secure the site.

Mullin did not respond to a request from Nunatsiaq News for comment.

The lack of security became apparent on Thursday, Aug. 29, when Environment Canada forecast a few days of high winds in Nunavut’s capital. Charred remnants of the ruin blew onto neighbouring buildings and parking lots. And a portion of sheet-metal roofing still attached to the partially destroyed building began flapping in the wind.

The forecast winds never materialized: Wind gusts peaked at 62 kilometers per hour on Aug. 29 before dying down, according to Environment Canada. On Aug. 30, the excavator was used to remove the portion of metal roofing that had been flapping in the wind. It appears that neither NCC nor NHI has been seen at the site since Aug. 30.

“Building owners are responsible for cleaning up and securing the site following a fire,” Elgersma said.

Both the condo corporation and individual unit owners can be liable in a lawsuit, according to Nunavut’s Condominium Act.

But the city may share some liability if debris from the unsecured site were to injure someone or damage property.

The City must act on known safety concerns under the Cities, Towns and Villages Act. The City also has the authority to enact bylaws that compel the cleanup of properties or sites that pose a public safety and health risk.

Elgersma did not respond to a question about what safety or health risks the site poses to residents.

“The condo association’s insurance company is looking after managing the site,” Elgersma wrote.

The delay in cleaning up the site may be due, in part, to the lack of clarity on what started the fire. “Five different forensic fire inspectors deemed [the cause of the fire] undetermined,” wrote one condo owner in a Facebook post on Aug. 31.

That’s at odds with an RCMP news release, which stated that the building fire was started by a burning cigarette put in the garbage in one of the units.

But the cleanup of the site suddenly appears to be moving forward. Elgersma said demolition of the building should begin sometime this week.