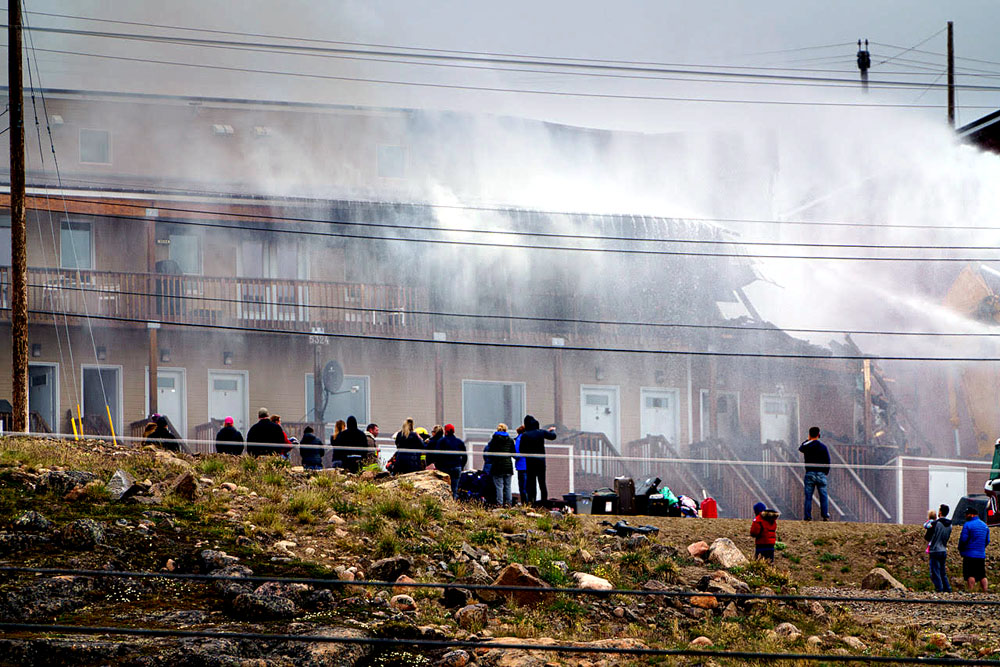 Iqaluit police say they have solved how three out of four fires happened over the weekend, including the one pictured here, where four units of a 10-plex were destroyed. (Photo by Bill Williams)

The Iqaluit RCMP say they have worked out what caused three of the four fires that broke out over the July 1 weekend.

The first fire, on June 29, burned a shack on the beach in the area behind the 200s block.

Police say they suspect that this fire, which spread to two other shacks and destroyed equipment, was caused by an arsonist and that they are still investigating it.

The second fire, which broke out around 5:30 a.m. on June 30, burned a cabin near the old dump in Apex. That fire is related to the ongoing investigation of a second-degree murder charge laid against an Iqaluit man, police say.

RCMP say they have identified the people responsible for that fire and no other information will be released. More charges against the suspects are pending, police say.

The third fire, which broke out about an hour later on the same morning, destroyed four out of 10 units in a residential 10-plex in the city’s Plateau area.

Police say the 10-plex fire was accidental, caused by a burning cigarette put into the garbage in one of the apartments. No charges are pending.

RCMP evacuated all tenants and broke the window of one apartment to rescue a trapped resident, police say.

The fourth fire, which burned down two sheds behind house 753 in the Lower Base neighbourhood, was caused by a child.

Police said an 11-year-old boy tried to enlarge a small hole in the shed’s outer canvas by setting it on fire so he could see inside.

Police say no charges are pending because of the boy’s age. Under the Youth Justice Act, children under the age of 12 cannot be charged with a criminal offence.

The boy’s parents were involved in a “consultation and interview” about the fire, police said.

Police also continue to investigate the cause of a fire that burned Nanook School’s tupiq in Apex on May 24.

A video was released to the public shortly after the fire that showed the suspect wearing a grey toque, dark coloured jacket and a black backpack with white lettering and trim.

No new leads have come from that video, police say.