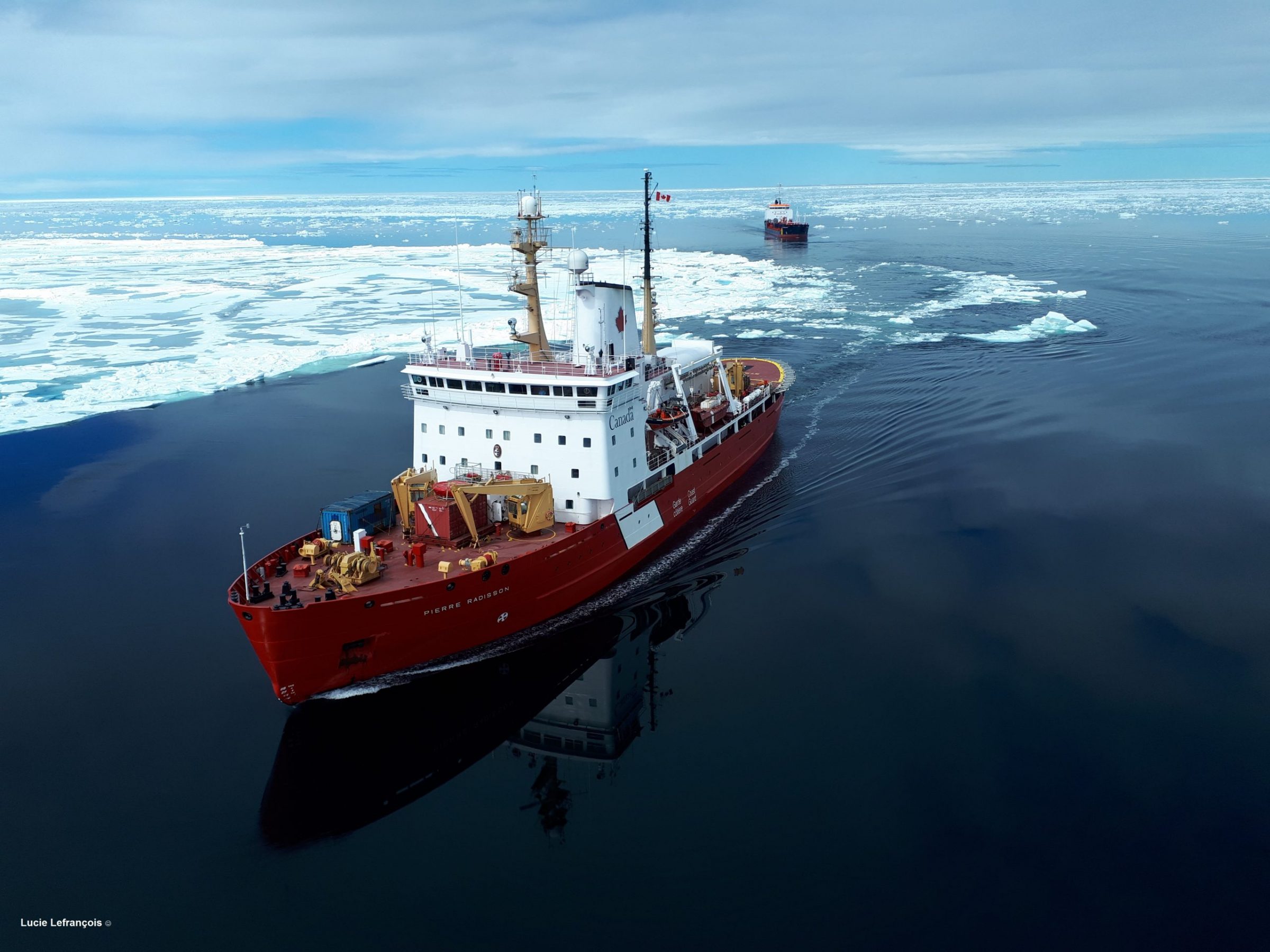 The CCGS Pierre Radisson escorts a commercial vessel through ice in Ungava Bay in 2018. The Radisson is scheduled to leave from Quebec City on June 22. (Photo courtesy of the Canadian Coast Guard)

COVID-19 prevention will be the “key focus” when the Canadian Coast Guard officially starts its icebreaking operations in the Arctic on June 22, its top officials said more than once in a technical briefing with media on Tuesday, June 9.

The coast guard has had no cases of COVID-19, said Chris Henderson, the coast guard’s deputy commissioner of operations.

Since mid-March, the coast guard has been operating “safely and securely,” actively monitoring the pandemic to make decisions with the best guidance possible, he said.

Eight coast guard icebreakers are scheduled to deploy in the Arctic this season, with the CCGS Pierre Radisson to depart from Quebec City on June 22, while the CCGS Terry Fox will depart from St. John’s, also on June 22.

The coast guard officials said they would like to see all crew members get tested for COVID-19 before they sail, but how this testing would take place is still being worked out.

They said they are still in negotiation with provinces and even private companies to see how that testing will occur.

COVID-19 remains a big worry to some in the coast guard: Stéphane Julien, captain of the Radisson, said he is concerned that “a medical evacuation in the Arctic could take several days,” in an internal memo obtained by Radio-Canada.

“In the Arctic, icebreakers are at least three days away from the closest Canadian port of refuge,” Julien said in the memo.

The Radisson is to leave on a 40-day mission.

Julien said a voyage of that length with a sick crew member could become a nightmare and would be dangerous for the safety of the vessel and its crew, in the memo cited by Radio-Canada.

Julien said he feels it is “essential” to test everyone for COVID-19 before they board.

Coast guard officials said there are still two weeks remaining before the Radisson leaves and that allows time for testing protocols to be finalized.

Crew members will undergo other pre-screening measures and be subject to regular temperature checks on board carried out by medical personnel, officials said.

There will be procedures to respect social distancing on board ship, such as staggered meals, they said.

Neil O’Rourke, the coast guard’s assistant commissioner for the Arctic region, said the upcoming season is a “unique year” when it comes to ensuring the resupply of northern communities in Nunavut.

The coast guard, while adapting to the new reality, will continue to engage regularly with its Inuit partners, he said.

However, everyone will keep their distance, even during crew changes at Nunavut airports: when these take place, there will be no contact with community members, by agreement with Nunavut public health officials, as is the case with charter arrivals to the territory’s mines.

“We feel very comfortable from the way we have been operating and [the] Government of Nunavut has accepted this,” O’Rourke said.

If the coast guard has to intervene in an emergency situation, personal protective equipment and other measures would be used, he said.

Due to the pandemic, all non-essential public engagement activities in the Arctic have been cancelled this year.

To further protect the North, crews and vessels will limit their contact with communities, unless essential, such as during a possible medical emergency.

Then it will be on a case-by-case basis, officials said during the briefing.

The Inshore Rescue Boat station in Rankin Inlet reopens on June 17. It’s operated by four members of the coast guard and Inuit students who provide local search and rescue response.

The station will be operational until Oct. 24.

But before the coast guard members come up, they will have first gone into isolation for two weeks in Winnipeg.

The annual reopening of the Marine Communication and Traffic Services Centre in Iqaluit took place on May 20.

The centre will remain open until Dec. 21, and it’s likely its staff won’t be able to take a break before then.

Overall, fewer vessels will be in Arctic waters this summer: Transport Canada has already banned cruise ships and most pleasure craft from Arctic waters.

As well, the CCGS Amundsen will not carry out its regular season of scientific research.

But the coast guard said the Canadian Hydrographic Service hydrographers would sail aboard four icebreakers in the North, including the Radisson and the Amundsen, to conduct seabed mapping programs with multi-beam sonar systems.