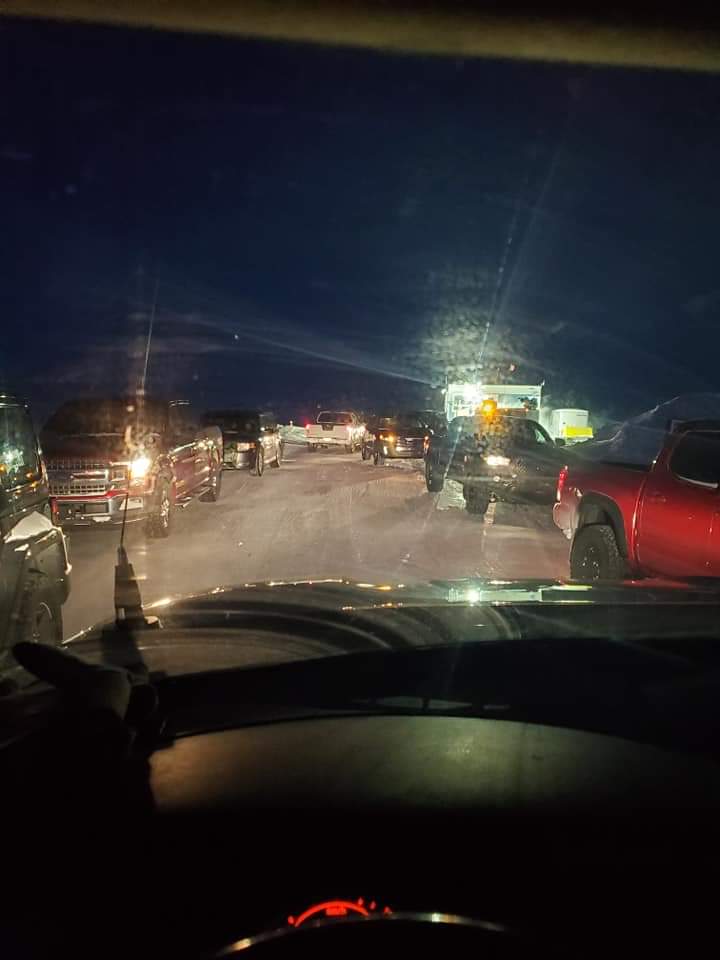 On the evening of Wednesday, March 18, a blockade of trucks idles on the road leading to the Meliadine gold mine near Rankin Inlet, one of three operated by Agnico Eagle Mines Ltd. in the territory, to prevent a planeload of newly arrived Quebec workers from getting into to the site, about 20 kilometres outside the community of about 3,000. (Photo by Noel Kaludjak/Twitter)

To reduce the risk of infection from COVID-19, Nunavut workers at Agnico Eagle Mines Ltd.’s three operating mines will not remain on those sites.

Agnico Eagle said early today in a statement that “all Nunavummiut workers currently on site will be returned home and those that are currently off-site will not return.”

These employees will continue to receive their regular pay during this period, said the company.

Agnico Eagle said it would also meet with its Nunavut contractors to discuss similar measures involving Nunavummiut workers employed by the contractors.

“We value our relationship with the people of Nunavut and are committed to do what is best for the health, safety and well-being of all our employees and the communities,” said Sean Boyd, Agnico Eagle’s CEO, in the statement.

“This precautionary measure is being implemented to eliminate the potential risk of transmission of COVID-19 from a southern worker to a Nunavut worker, with the risk of it moving into the communities.”

Agnico Eagle plans to continue operations at both its Meliadine and Meadowbank gold mines with the remaining workforce, the company said.

Unlike TMAC Resources Inc. and Baffinland Iron Mines Corp., which also operate mines in Nunavut, Agnico Eagle said earlier this week that it had decided not to send Nunavut workers at their mine sites back to their home communities in an effort to contain COVID-19.

Agnico Eagle said on March 17 that it had no plans to send its roughly 400 to 500 Nunavut-based employees and contractors off-site: Dominique Girard, Agnico Eagle’s vice-president of Nunavut operations, had said that for now, sending workers back is “not an option.”

“Inuit were saying the gold would not go anywhere, but people’s lives are not the same. Inuit have a philosophy about this: material things can always be replaced but not a human life,” she said.

The mining company’s change in plans came after workers’ growing concern over exposure to COVID-19 brought into Nunavut by southern workers. As of today, Nunavut has announced no confirmed cases.

The controversy resulted in a blockade set up by Rankin Inlet residents in parked trucks, cutting off access to the Meliadine gold mine site on Wednesday evening.

They idled on the road leading to the Meliadine gold mine near Rankin Inlet, to prevent a plane-load of newly arrived Quebec workers from getting to the site, about 20 kilometres from the community of about 3,000 people.

Rankin Inlet folks have closed off the road to the Meledine Gold mine in protest to stop operations die to Covid-19 pic.twitter.com/yzVlImYW19

Many of the mining company’s workers said they had become increasingly worried about the spread of COVID-19.

They learned about the state of emergency in Nunavut declared by the Government of Nunavut on Wednesday, March 18, and widely shared a post on Facebook yesterday that made them more concerned about the lack of observance of social distancing protocols. 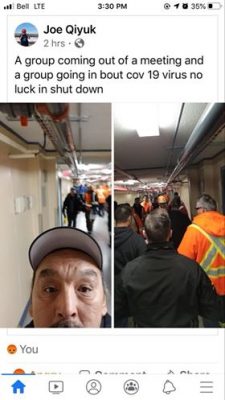 This Facebook post showing crowds of workers heading to work and on site at Agnico Eagle’s Meliadine mine site was widely circulated on Wednesday. (Screen shot)

That move prompted the Municipality of Rankin Inlet, in collaboration with the GN, the Kivaliiq Inuit Association, Agnico Eagle, and its mayor and council, to make a late-night announcement about a meeting today to review the pandemic plan and “to make decisions moving forward.”

That wasn’t enough to quell the unease of community members who took to their Facebook page to talk.

“Bad enough living up north, we don’t have proper equipment, a building and staff to handle this kind of epidemic. For the safety of our town’s, all mines should close too! Baffin and TMAC sent their Inuit home,” said one poster.

After the Government of Nunavut declared a state of emergency on March 18, Agnico Eagle told Nunatsiaq News that it was trying to figure out if its workers were part of the essential workers freed from the 14-quarantine periods now imposed on people coming into the territory.

Sandra Oolooyuk told Nunatsiaq News she wants to know “if anyone can explain to me how the Agnico Eagle Mine in Rankin Inlet and Baker Lake, Nunavut, is an essential service?

“They are flying people in and out every day to pull gold out. That gold will still be there tomorrow, next week, next month, even next year. No amount of gold or money would replace a loved one if they pass away from COVID-19?”

Company had beefed up COVID-19 prevention

The active screening of workers heading to the site started on March 13 for all Agnico Eagle employees and contractors departing Mirabel, Val-d’Or, Rankin Inlet or Baker Lake.

As well, the company said that more hygiene measures had been integrated into the aircraft boarding process: portable sinks will be made available and no more boarding passes will be distributed.

“We are working with our Nunavut contractors for employee buses to be sanitized as well,” the company said on March 17.

As a preventive measure, only essential traffic would be allowed on the all-weather access roads from Meadowbank to Baker Lake and from Meliadine to Rankin Inlet.

This means no Agnico Eagle vehicles could go into these communities without the approval of the manager on duty and only maintenance work will be allowed.

Other preventive measures taken by Agnico Eagle include the following:

• Suspension of visits to operations by non-essential visitors and contractors.
• Encouraging all employees to avoid, wherever possible, exposure to large gatherings of people such as on mass transit, in airports, at sporting events, at conferences, etc.
• Allowing non-essential workers to work from home. This includes workers at all three Nunavut mine sites, as well as offices in Val-d’Or and Mirabel.
• Cancellation of all face-to-face meetings in the communities: “meetings should be conducted via conference call.”