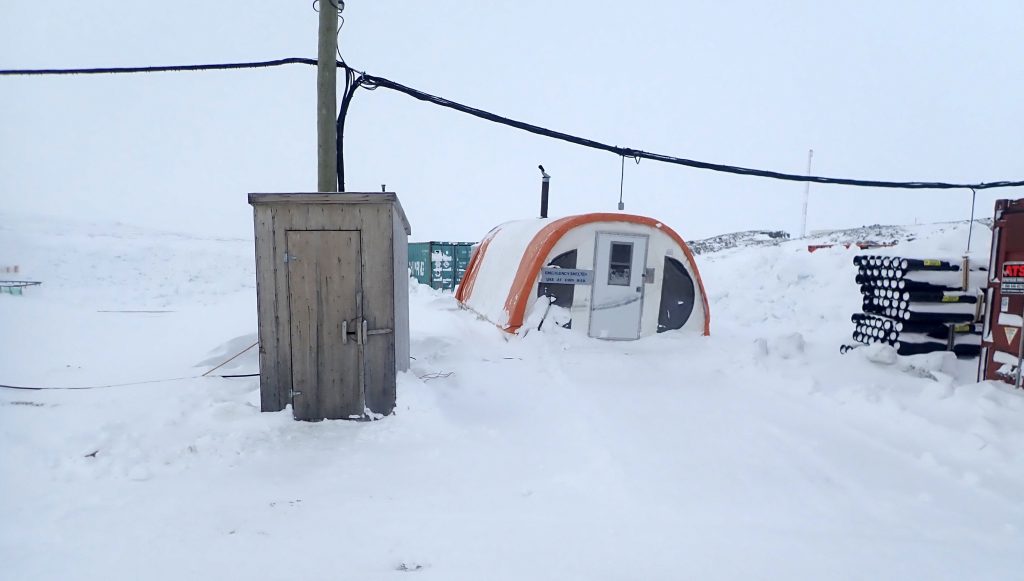 To reduce possible exposure to COVID-19 among Nunavummiut, TMAC Resources Inc. is sending its Nunavut employees and contractors back home and locking up this survival shelter at Roberts Bay, which is often used by hunters. (Photo courtesy of TMAC)

TMAC Resources Inc. plans to send its Nunavut mine workers home to protect them from exposure to the new coronavirus, says Alex Buchan, the company’s Cambridge Bay-based vice-president for corporate social responsibility.

TMAC, which operates the Hope Bay gold mine about 110 kilometres from Cambridge Bay, is screening everyone who heads to the site.

And it’s now also sending its Nunavut employees home, as Baffinland Iron Mines Corp. said it plans to do.

“The risk to Nunavut-based workers is such that starting this week, we will begin demobilizing our Nunavut workforce and having them stay at home at standby salary rates,” said Buchan in an email to Nunatsiaq News.

Through the mine’s infectious disease plan, TMAC said it aims to eliminate the potential risk of transmission of COVID-19 from a southern worker to a Nunavut worker, and then on to a Kitikmeot community.

“Southern crew change flights will continue during this period with our existing screening protocols in effect,” he said.

TMAC plans to continue without its Nunavut workers on the site for the next two crew change rotation cycles and will evaluate the situation from there, Buchan said.

The move was taken in coordination with Kitikmeot Corp., the Inuit development corporation which operates four subsidiaries at Hope Bay. KC will also offer standby salaries to its affected employees, Buchan said.

TMAC has also decided to lock up the survival shelter at Roberts Bay near the Hope Bay mine site. This shelter is usually available for hunters coming from Cambridge Bay to the Hope Bay area and further on into Bathurst Inlet.

“This is being done to eliminate the risk of transmission of COVID-19 from one of our site workers to a travelling hunter,” Buchan said.

But he said TMAC will assist with any public or community searches in the Hope Bay area if needed, based on requests from Nunavut’s Emergency Measures Office.