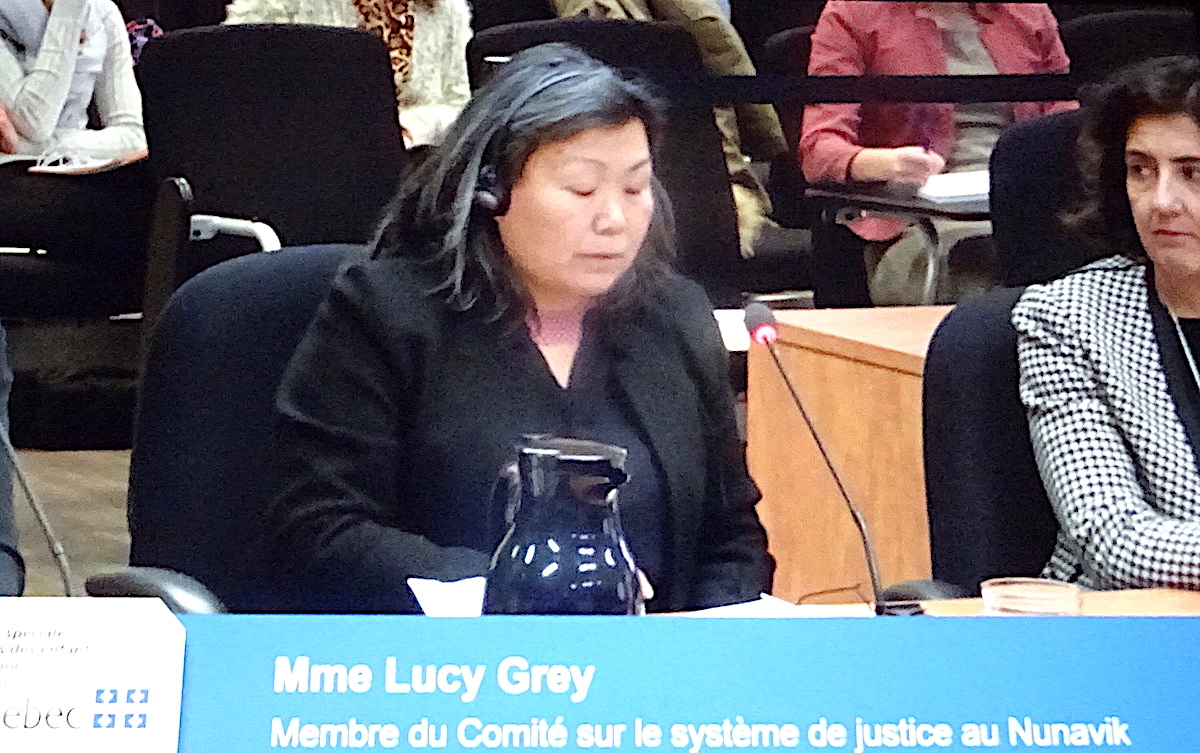 Lucy Grey, a member of the Quebec Bar’s committee on Nunavik’s justice system, spoke at a Nov. 28 hearing of the Laurent Commission on the Rights of the Child and Youth Protection in Montreal. (Screen shot)

Poor understanding of Quebec’s youth protection system is an enormous hurdle to overcome in Nunavik.

That was the message from Lucy Grey, a member of the Quebec Bar’s committee on Nunavik’s justice system, at a hearing of the Laurent Commission on the Rights of the Child and Youth Protection, held on Nov. 28 in Montreal.

“This whole system and all this legalese and all these youth protection acts are completely foreign,” Grey told the commission. “A parent does not know what their legal rights are…. Our community members don’t understand the system.”

But a huge gap remains between Nunavik and Quebec, she said.

“For example, English is our second language. English is the working language, but our first language is Inuktitut,” she said.

Francophone justice and youth protection workers also work in a second language while in Nunavik, she said.

“There’s a big gap where we do not really understand each other and ultimately it is the child who falls through the cracks,” she said.

That exacerbates the other problems in the youth protection system, she said.

Quebec called the Laurent commission after the death of a seven-year-old girl in Granby in the Eastern Townships last April. Youth protection authorities had monitored her situation, but the girl died after a “succession of events that should not have occurred,” an investigation found.

In response, Quebec said it would commit to examining Quebec’s youth protection services, the law that governs these services, as well as the role of the courts and social services.

At the commission last Thursday, many spoke about a new “one file, one child” rule, which would keep all information about a child under youth protection together in a single online location. This might have prevented the missteps that led to the girl’s death, they said.

“We welcome the ‘one file-one child,'” Grey said.

But she said the basic structure of the judicial system hasn’t yet been implemented in Nunavik.

“So we cannot even argue about ‘one file-one child,'” she said, adding that Nunavik can’t recruit judges, has no legal aid lawyers and there’s a big turnover in youth protection workers.

Grey asked for Laurent commission to build on the recommendations of the Viens commission, which looked at how to improve public services for Indigenous people in Quebec.

But Grey said there has to be a will to do that.

“We are ultimately Quebec citizens and want our rights to be protected,” she said. “Often times we find that we (Inuit) are put aside and all our rights are violated became of a lack of understanding.”

The commission must submit its report and recommendations to the Quebec government by Nov. 30, 2020.

The commission, headed by Régine Laurent, a former health union president, has a website where anyone can find information about the commission or submit their stories to commissioners.