“Many laws, policies, standards or institutional practices in place are sources of discrimination and inequity” 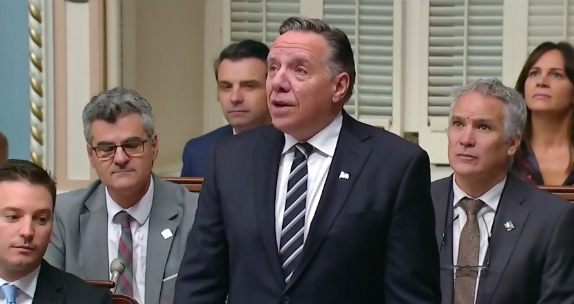 Quebec Premier Francois Legault apologized to the First Nations and Inuit of Quebec on Oct. 2, following the release of a report on the discrimination they have faced in their relations with the public service. (Screenshot)

Quebec Premier François Legault has apologized to First Nations and Inuit of Quebec, following the release of the Viens commission’s report on discrimination imposed by the public service.

In this way, Legault said, the province of Quebec has failed in its duty to Indigenous people.

Legault gave the apology—the first of 142 recommendations that came out of the report—in the National Assembly on Wednesday, Oct. 2, two days after retired Superior Court Justice Jacques Viens, who led the commission, released his report.

Excuses are not enough, Legault said. He promised to consider each of the recommendations and to look deeper into why this discrimination took place.

“Many laws, policies, standards or institutional practices in place are sources of discrimination and inequity to the point of seriously compromising the quality of services offered First Nations and Inuit,” Viens said at the Sept. 30 release of the report.

His inquiry looked specifically at the treatment of Indigenous people by police, the justice system, the correctional system, health and social services, and youth protection services. 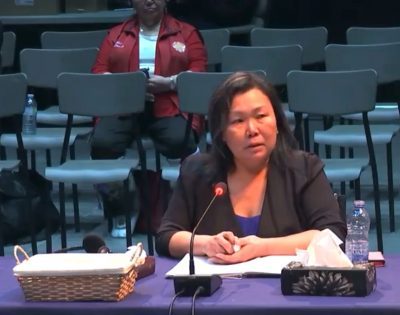 Lucy Grey was the Inuit liaison for the Viens commission. Here, she testifies during the November 2018 hearings. (Photo by Sarah Rogers)

In response to the report, the Kativik Regional Government released a statement recognizing the importance of the recommendations, or calls for action, in improving the relationship between Indigenous people and the provincial government.

In particular, the KRG urged the government to take action on a recommendation that videoconferencing be implemented for bail hearings for offenders in remote areas, something the regional government has been in talks with the province about.

“The KRG is fully committed to working closely with all government authorities and other regional organizations to implement all the commission’s calls for action that fall under its mandate,” said KRG chairperson Jennifer Munick in a news release.

The Nunavik Regional Board of Health and Social Services also responded to the report by saying that it addressed the concerns the board had expressed during the commission’s hearings about health and social services and youth protection services.

The need for funding and autonomy in providing health and social services for Inuit was voiced by the board during the hearings.

“We now expect the Government of Quebec to respond to the report’s calls for action, and this with our close involvement in their design and application,” said executive director Minnie Grey in an Oct. 2 news release.

The board also expressed appreciation for the commission tasking the Quebec ombudsperson with overseeing that the 142 recommendations are acted on.

Makivik president Charlie Watt spoke during the hearings about the Nunavik region’s process of self-determination, and said in an Oct. 1 release that Inuit provided testimony in all areas of the inquiry’s mandate.

“Many times, in tears, my fellow Inuit testified to the commission about their experiences with the health, justice, social services, youth protection, historical injustices, and other interactions with Quebec government services,” Watt said.

While he noted a full response to the report was forthcoming, “based on the first call to action—that Quebec apologize to Inuit and First Nations for the rampant discrimination found in public services provided to our people—we feel we have been heard.”