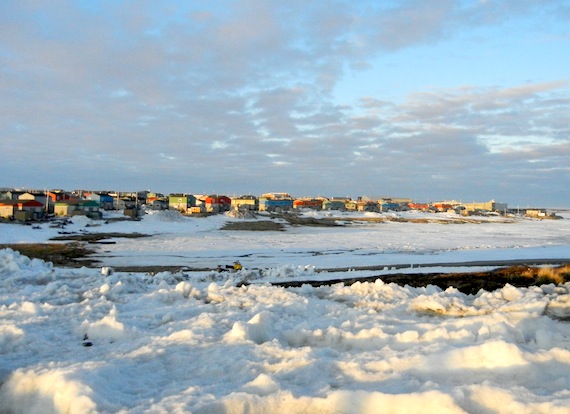 Kativik Regional Government councillors have raised concerns that low salaries and a lack of benefits for staff at Northern Villages, such as Puvirnituq, seen here, are causing high staff turnover. (File photo)

They want to see higher wages and benefits for village staff to address the issue.

“I would like to see something done concerning that for the (Corporation of Northern Villages) staff.”

She said due to the lack of benefits and comparatively lower salaries, there is high turnover at the Northern Villages, meaning they regularly need to find replacements.

Sarollie Weetaluktuk, regional councillor for Inukjuak, said beyond salaries, the lack of benefits for municipal staff is also an issue.

“They don’t have the benefits like other organizations. They have no holiday benefits because it’s not under our law of CNV. Also, they don’t have benefits of cargo allowance,” said Weetaluktuk.

“They have none of these. That’s why our staff goes to these other organizations where they have benefits.”

Salaries and benefits for NV staff are determined by the municipality, not the regional government, said Johanne Fortin, director of the KRG’s legal department.

“From a legal perspective, nothing prevents an NV from raising salaries of staff. The only obligation is that the minimum standard has to be respected,” Fortin said.

“Otherwise, if the NV decided to increase the salary of staff, it’s possible, provided the funding is there to pay the salaries.”

This, she said, is where it gets complicated—ensuring the budget allows for an increase in wages.

She advised that any NV considering salary increases should consult with Raymond Chabot Grant Thornton, the auditors for the KRG and the Northern Villages.

“They’ve been working in the region for many, many years,” she said. They could advise on whether there is flexibility in the budgets.

Charlie Arngak, Speaker of the regional council and former mayor of Kangiqsujuaq, told his fellow councillors that mayors and councils in the communities need to discuss their budgets and what they can afford.

“Last year, employees said they needed an increase and we increased the salary,” Arngak said of his community. “We didn’t go to the KRG, we talked to the auditors—it’s a good time to do it when you’re looking at the budget.”

For the KRG’s part, director general Michael Gordon said, they do not supervise budgeting for the NVs.

“The same thing with the salaries of your employees, we are not supervisors of that,” he said.

But he added that Raymond Chabot Grant Thornton’s audits of CNV financial statements two years ago suggested there could be space for salary increases in most communities.

Among the 14 Northern Villages in Nunavik, one community went over budget by $2 million, while there was an overall surplus of $12 million in the region.

“So, if you want to increase the salary of your employees, that would be a good avenue,” Gordon said.