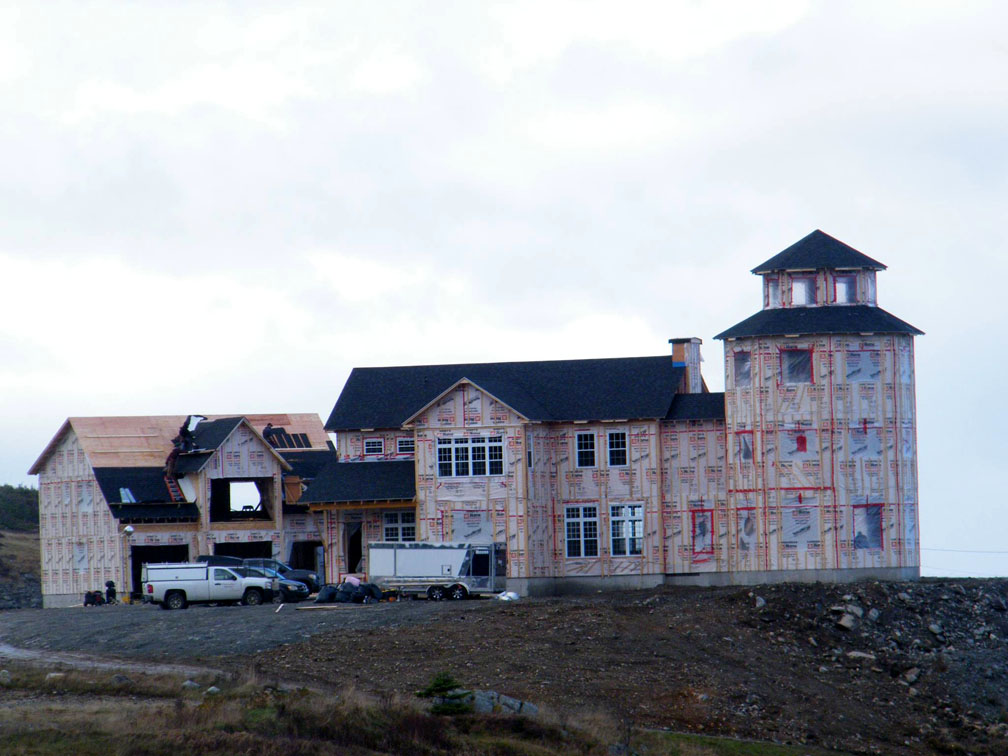 This is the building in Winterton, Newfoundland, described as a “lavish mansion and guest house,” that Baffin Fisheries ex-CEO Garth Reid is alleged to have constructed, as it looked in 2017. (File photo)

A judge of the Supreme Court of Newfoundland and Labrador ruled on Dec. 17 that the ex-CEO of Baffin Fisheries, Garth Reid, must pay $544,049, plus interest and legal costs, that he “unlawfully” took from his former employer.

That decision, rendered in St. John’s by Justice Vikas Khaladkar, arises from a lawsuit that Baffin Fisheries filed against Reid in 2017.

In that legal action, the fishing company, owned by five Inuit hunters and trappers associations in the Baffin region, alleged that in 2016 and 2017, Reid and his wife, Valerie Reid, unlawfully spent Baffin Fisheries funds for their personal use.

Those funds, Baffin Fisheries alleges, went into a “lavish mansion and guest house” constructed in the small town of Winterton, Newfoundland, overlooking Trinity Bay on the west side of the Avalon Peninsula.

The lawsuit alleged that Baffin Fisheries and its subsidiary, Niqitaq Fisheries Ltd., were invoiced by a Quebec construction company for construction expenses related to that house.

Those expenses were supposed to have been used for construction of a Baffin Fisheries office in Pond Inlet.

A Baffin Fisheries news release quotes Khaladkar as saying: “That first of all, Garth Reid unlawfully converted $544,049.17 to his own use. Secondly, I declare that the monies that were converted were the property of the [Baffin/Niqitaq] and that [Reid] had no right to convert the funds in the manner that he did.”

Khaladkar’s judgement follows a civil court process. No criminal charges have been laid in the matter.

From her, they seek an additional $855,983 “related to the former CEO’s scheme to build a personal residence in Winterton with company funds,” the news release said.

“The Winterton Property was built not on the sweat and toil of Reid but rather constructed and paid for through deception, deceit and conversion of the financial resources of Baffin Fisheries, a not-for-profit corporation, whose sole purpose is to provide a financial return to hunter and trapper associations comprised of the Indigenous peoples of Nunavut,” Baffin Fisheries’ lawyer, Philip Buckingham, said in the news release.

“We have been instructed to vigorously pursue the misappropriated funds, and we will continue to do so,” Buckingham said.

Johnny Mike of Pangnirtung, the chair of Baffin Fisheries’ board, said the Dec. 17 judgment is good news for the Inuit of the Baffin region.

“This is welcome news for the thousands of shareholders of Baffin Fisheries, who are all Inuit beneficiaries under the Nunavut Land Claims [Agreement], living in the harshest, most remote communities in Canada,” Mike said.

“We will continue to work hard to recover all monies unlawfully taken, and return it to our communities.”

A letter from the Canada Revenue Agency sent to Garth Reid in September 2018, and obtained by Nunatsiaq News, suggests that Reid may have incorrectly reported his income for the 2016 and 2017 taxation years.

But it states he did not report a total of $691,887 in “employee benefits” and “unreported revenue.”

“It was identified that you received taxable benefits from the corporation in your capacity as the chief executive officer as the corporation paid for your personal expenses related to the building of a residential property in Winterton, NL,” the CRA letter said.

“In addition, not all of the compensation you received from the corporation as consulting fees have been included in your income,” the CRA told Reid in 2018.