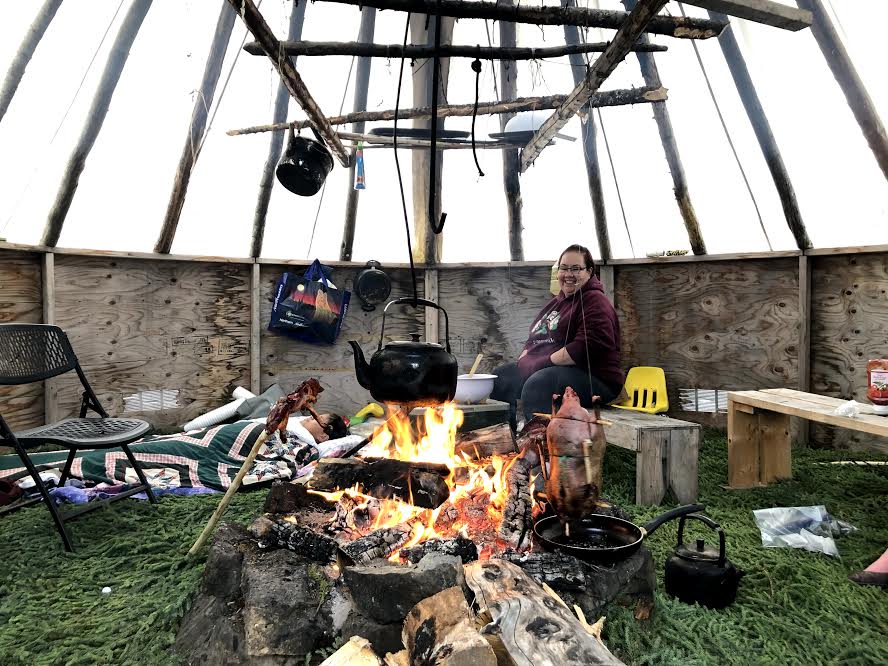 Patricia George caters for both the Cree community of Whapmagoostui and the adjacent Inuit community of Kuujjuaraapik. (Photo by Lyne St-Louis)

KUUJJUARAAPIK—After feeding 90 people at a public hearing one day in late January, Patricia George takes a minute to rest on a couch at the Co-op Hotel in Kuujjuaraapik. It’s Friday, and she’s been on her feet since Monday.

George and her staff of 11—including her husband, Samson Kawapit, who helped out in his time off—served breakfast, lunch and dinner. There was Chinese food with rice, noodles and ribs on the first night and “Indian tacos” made of a cheese and salsa mix on bannock for lunch. A classic spaghetti dinner was served the next night.

It’s all about timing and planning, says George. She’s not a professional chef, but a well-practised and well-planned cook. Her degree in business administration comes in handy too.

For the first supper at the hearing, her crew had strict orders to have the starches cooking one hour before serving time. And, she emphasizes, she doesn’t, and couldn’t, do this job alone. Her team is beside her all day, starting early in the morning to let her rest for the late nights she puts in.

The bannock that accompanied most lunches was made by her friend, and her daughter prepared cheesecakes for dessert. “I don’t make everything, I make a plan,” she says.

George was born and raised in Whapmagoostui, the Cree community that shares with Kuujjuaraapik the land where Great Whale River meets Hudson Bay. The Inuit community stretches across the shore of Hudson Bay at the river’s mouth. Immediately behind it, Whapmagoostui spreads further back along the river’s edge.

There are separate schools and municipal offices and both Cree and Kativik Regional police forces. The communities’ fire halls are across the street from one another. Whapmagoostui has an arena, while Kuujjuaraapik has paved streets.

George cooks for both.

She didn’t intend to start a catering business a few years ago, when she posted meals for sale on Facebook. Her family—including three children—had a dish or two left over, so she figured someone might want them.

They went quickly. She started preparing extra dishes for sale on purpose—a sort of take-out service the town didn’t have, aside from the Airport Resto, which offers classics like burgers, fries and sandwiches. 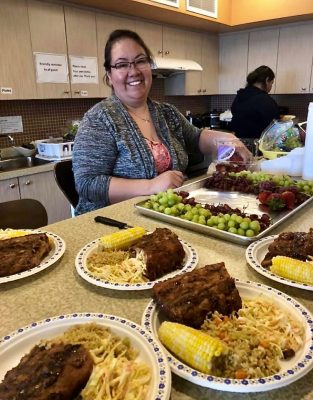 But George’s take-out has become a bit of a novelty; on Valentine’s Day she cooks a special dinner for a handful of couples. Last year, when she delivered it to their homes, one couple had a table all set, covered in rose petals. “That was really special to me, with the rose petals and everything,” she says.

More orders came in: a salad or side dish for a big dinner, or the fixings for a party. Catering parties, George says, partly came out of her wanting to give a hand to women who take on the whole meals. It’s often the mother that’s cooking, George says—they spend the day preparing for the party and can’t enjoy it. “They don’t even eat, they’re so busy,” she says.

And the orders kept coming in—and growing. Three years ago she had her first request for a full catering service for a meeting of 40 people.

One of the more memorable catering gigs she’s had was for the Montreal Symphony Orchestra. They visited Kuujjuaq, Salluit and Kuujjuaraapik/Whapmagoostui. She covered the first and last stops, but was already booked up for their Salluit visit.

It was a challenge, she said. There were about 40 people for breakfast, lunch and dinner, in both Kuujjuaraapik and Kuujjuaq—where she was flown in with one staff member. And they had a few requirements: a vegetarian option and special low-cholesterol meals.

“Being Cree, I love meat,” George laughs. “I can’t understand why anybody would not want to eat meat.”

Now she’s cooked for numbers ranging from one single person—a girl home from college wanting to treat herself—to lineups of people at her family’s food truck, the Kawapit Chip Stand, to 400 people at Whapmagoostui’s Christmas dinner.

She cooked 49 turkeys between Dec. 3 and 29 last year for Christmas parties alone. “Nobody cooks that many turkeys in their lifetime,” she laughs.

But she and Kawapit so appreciated the business and support the community had given them that they decided to give something back. For every Christmas party they catered, they bought all of the fixings for a turkey dinner and donated it to a community member of the party organizer’s choice. “And the Cree weren’t strictly giving them to the Cree, and the Inuit weren’t strictly giving them to the Inuit,” she says.

For the final supper at the 90-person hearing in Kuujjuaraapik, there was a country food feast complete with frozen char, caribou and maaqtaq, as well as baked char and caribou with sides. George wanted to bake the char in a maple glaze, but checked with her Inuit clients. They wanted something more simple—she went with lemon. 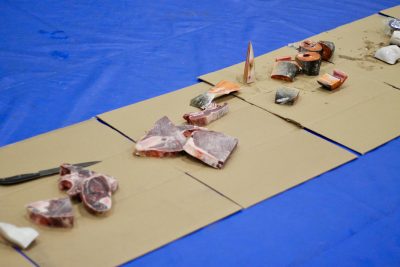 A country food feast, along with cooked caribou and Arctic char, made up the final meal for a 90-person hearing that Patricia George and her team catered in January. (Photo by Elaine Anselmi)

On Facebook, her vehicle for marketing, she posted photos of the cooked dishes from that final supper, as well as the spreads of country food on cardboard, and people hungrily lining up.

She wrote, “I’ve learned to adapt to the people we serve. I also need to own an ulu.”

She’s since bought one.