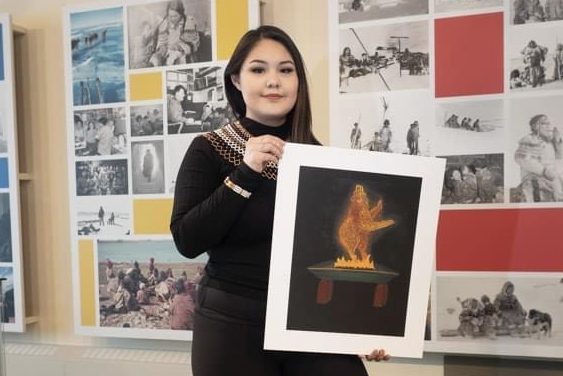 A 24-year-old artist from Baker Lake will have her artwork featured across the territory, after winning Northwestel’s 2021 phone book cover competition.

Kaytlyn Amitnak said she worked on the oil painting one evening, with her younger sister by her side matching her colour-for-colour, and finished it in under four hours.

The end result, titled Dancing Grizzly Bear, depicts a glowing bear in the centre of a qulliq, or a traditional Inuit oil lamp, with its arms and head raised to the surrounding darkness.

“The qulliq was the source of heat, and what I thought was the bear, the bear was dancing [in] the flickering flame throughout the night to keep all those who see it warm,” said Amitnak. 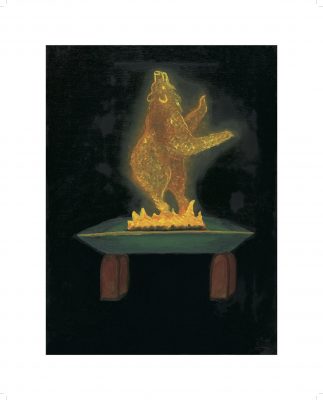 Amitnak says the grizzling bear in her painting is dancing in the flame of a qulliq “to keep all those who see it warm.” (Photo courtesy of Northwestel)

Amitnak said she takes inspiration from Inuit art and artists that have come before her, and that the piece represents a part of Inuit culture that isn’t as prominent as it used to be.

“I find that our culture is really beautiful and I wish more Inuit would learn [it],” she said.

The piece began with the qulliq. Then, as Amitnak drew the flames, she began shaping them into the shape of a dancing bear.

“I really fell in love with that idea,” she said.

As a little girl, Amitnak said she worked her way up from crayons to acrylics and now oil, always along the way treating art as a hobby.

Winning this competition, she said, was a source of pride.

“Growing up, it’s always something I’ve done out of enjoyment,” Amitnak said. “Winning the prize, being on the cover of the phone book gives me a really big feeling of achievement.”

Amitnak also took home a $5,000 prize for winning the competition.