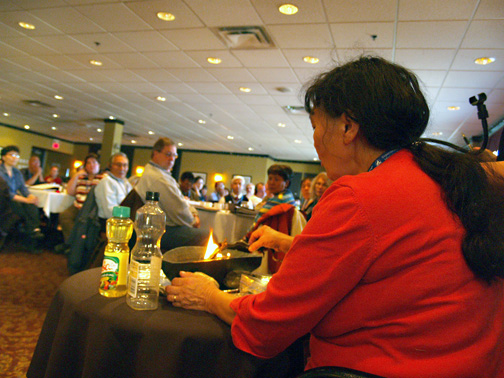 Members of Nunavut’s district education authorities watch the lighting of a qulliq before the start of a three-day training workshop on the new Education Act in Iqaluit Tuesday. (PHOTO BY CHRIS WINDEYER)

Members of Nunavut’s district education associations came to Iqaluit for some schooling of their own Tuesday.

After years of failed attempts, political battles and painstaking public consultation, Nunavut finally has its own Education Act. So the DEAs joined education department staff at an Iqaluit hotel to learn how to implement the act, which gives DEAs new powers over what goes on in the territory’s classrooms.

But for Louis Tapardjuk, the education minister, the act is about more than dividing up bureaucratic responsibilities, it’s about ending what he called an alienating divide between school and home for Inuit parents and students.

“In the old Education Act, they had to live two lives: one in the school environment and the other is based on culture at home,” he told reporters.

The new act envisions a completely bilingual education system by 2019. In his opening remarks to DEAs, Tapardjuk said strengthening Inuit languages is the best way to transmit Inuit traditional knowledge to future generations of students.

The act also gives DEAs new powers over curriculum and the ability to tailor cultural programs to local traditions. The act also creates a new type of staff member, which DEAs have the power to hire: the Innaq Inuksiutiliriji, an elder who can help teach Inuit culture.

The act “completely changes our way of dealing with education,” Tapardjuk told DEAs. “The education system will be more inviting for Inuit families.”

Peter Geikie, the assistant deputy minister of school services and operations, told reporters this week’s workshop will stick to the day-to-day operations of Nunavut’s schools. The DEA members will learn about their role in hiring decisions and other responsibilities.

More in-services are scheduled for school staff later in the year, Geikie said.

The act also requires DEAs file annual public reports, and formally recognizes the Coalition of Nunavut DEAs. It gives the coalition input on regional staff hires, planning and DEA funding, and commits the education department to pay its bills, including salaries for two full-time staff.

It also commits the government to meet a student-teacher ratio better than the national average, which now stands at 14.5 students per teacher.

In last year’s budget, the government pledged $14 million over three years to pay for implementation of the act.