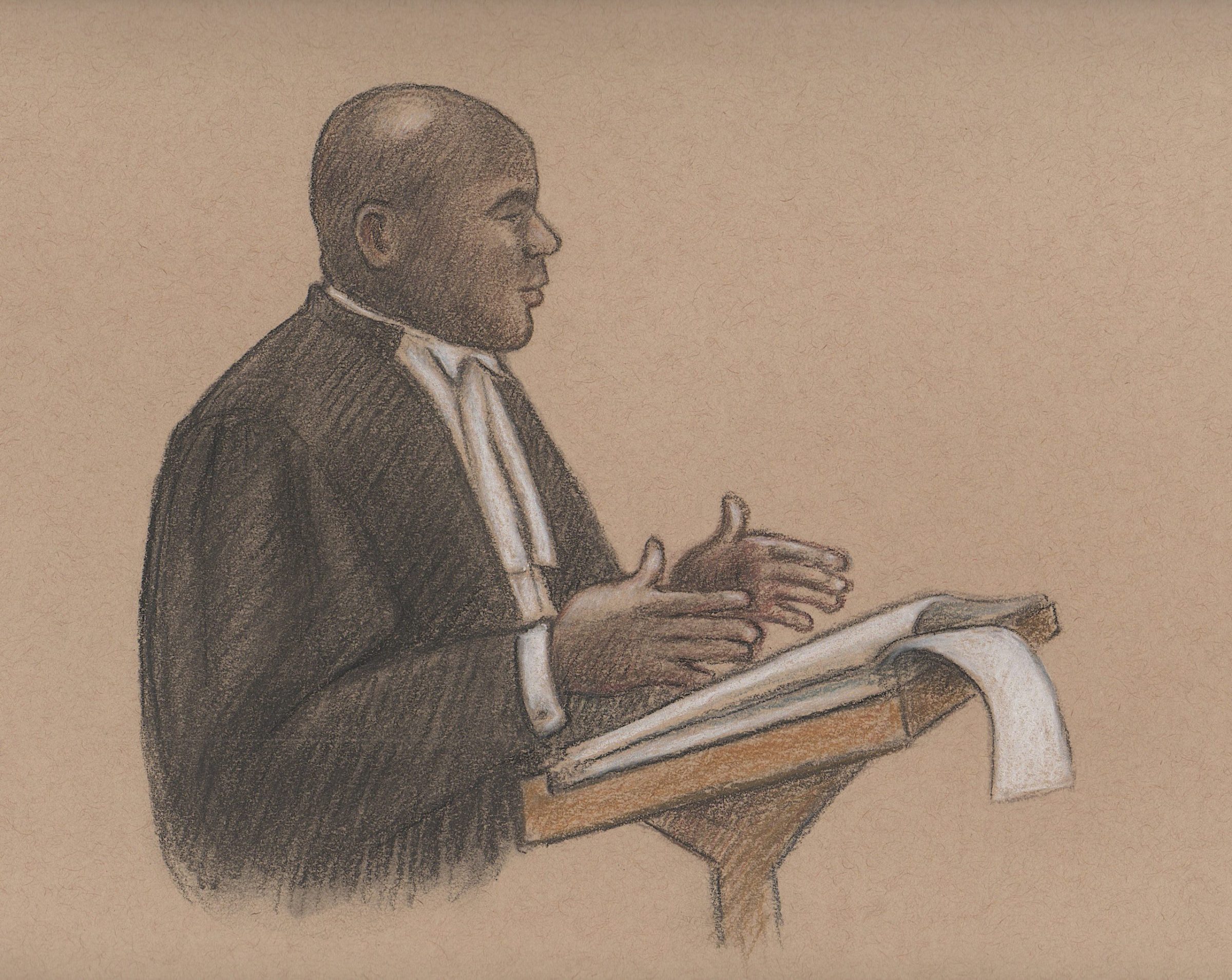 Defence attorney Michael Smith delivers his closing submissions at the first-degree murder trial of Tyler Hikoalok in Ottawa on Thursday. Hikoalok, 22, has pleaded not guilty to the 2018 murder of Elisabeth Salm. (Courtroom sketch by Lauren Foster-MacLeod)

Defence attorneys for Tyler Hikoalok encouraged the jury to find him guilty of manslaughter rather than the first-degree murder charge he faces, in closing arguments in court Thursday.

Hikoalok, 22, from Cambridge Bay, has pleaded not guilty to the 2018 murder of part-time librarian Elisabeth Salm, 59, in Ottawa.

The defence and Crown each delivered closing submissions to the jury Thursday, wrapping up six weeks of detailed and often distressing testimony regarding the events of May 24, 2018, when Salm was discovered badly beaten and clinging to life on the floor of the Christian Science Reading Room in downtown Ottawa.

Salm died May 25 and Hikoalok was arrested May 27. Security footage and DNA found at the crime scene linked him to the attack.

Earlier, the jury heard Hikoalok testify that he had been drinking vodka and rum on the morning of May 24 and subsequently blacked out for a 24-hour period.

“It is our position that as a result of the alcohol Tyler consumed and of his brain conditions, Tyler did not have the capability to form the intent to bring harm to Elisabeth Salm,” Smith said.

Less than an hour after the attack on Salm, Hikoalok interacted with teachers at the Debbie Campbell Learning Academy, an alternative school he attended.

Smith said the teachers “weren’t looking for signs of intoxication” in Hikoalok and therefore wouldn’t have been able to tell that he was experiencing a blackout.

He said Hikoalok’s actions and movements on the day he was arrested on Ottawa’s Rideau Street were “not congruent” with someone who knew he’d done something wrong.

There is also no evidence that Hikoalok and Salm knew each other, Smith said. Hikoalok himself testified he had never met Salm or visited the reading room.

“There’s no reason for him to intend to harm her,” Smith said.

“Whatever happened in that room must have been brief and impulsive,” Smith said, encouraging the jury to conclude “there was no foresight” in Salm’s killing.

He conceded there’s “no way around” the fact that Hikoalok sexually assaulted Salm, noting Hikoalok’s semen was found on her body.

“I’m not saying, find him not guilty because he’s had a hard life,” Smith said, but that “what came from that encounter was unintentional.”

Crown lawyer Brian Holowka, however, disputed the defence’s contention that Hikoalok showed no evidence of foresight in the attack on Salm.

Holowka suggested the accused walked into the reading room with the specific intention to sexually assault Salm.

On the video timeline presented as evidence, “we see him make a decision and enter the reading room where Salm is alone” at 9:15 a.m., he said.

The lack of sightlines to the back room of the centre offered Hikoalok a better opportunity to attack Salm, Holowka said.

“His intent to kill is evident from the violence he inflicted on her.”

Holowka described in detail many of the 54 injuries Salm sustained, including blunt force trauma to her face, signs of bruising to her genital area and a severe head injury that was ultimately ruled as the cause of death.

Salm’s husband, Lyle Young, and several of her family members sat together in the courtroom and consoled each other as images of Salm’s facial and neck injuries were displayed on the video screens.

Holowka said Hikoalok can be seen on video leaving the building that houses the reading room through a side exit and heading onto Laurier Street at 10:21 a.m., roughly an hour after he first entered the centre.

Holowka suggested Hikoalok left Salm injured to “eliminate” the only witness to the sexual assault — Salm herself.

“In my submission, this was a prolonged attack, and Tyler Hikoalok knew what he was doing,” Holowka said.

Hikoalok left the building quickly in a way that shows his thinking, Holowka said, changing his clothes before entering the Debbie Campbell Learning Academy around 11 a.m.

Ashley Potter, a supervisor at the school, earlier testified that Hikoalok joined him in the kitchen as they prepared for lunch and helped Potter chop vegetables.

Potter testified he did not notice any sign of Hikoalok being intoxicated.

This “devastatingly undermines” Hikoalok’s assertion that he was blacked out during this period, Holowka said.

In his testimony earlier, Gojer, the forensic psychiatrist who assessed Hikoalok’s mental state, had ruled out the likelihood that Hikoalok could be found not criminally responsible for his actions, Holowka noted.

Gojer was ultimately unable to come to an official conclusion as to Hikoalok’s mental state, but offered his expert opinion that Hikoalok likely suffers from a combination of fetal alcohol spectrum disorder, sexual deviancy and anti-social personality disorder.

Holowka submitted that having these mental conditions, however, does not mean Hikoalok lacked the capability to understand the consequences of his actions.

“Elisabeth Salm is dead because of the choices that Tyler Hikoalok made,” Holowka said.

The trial will resume Friday when Judge Anne London-Weinstein is expected to deliver a lengthy charge to the jury before they begin deliberations.