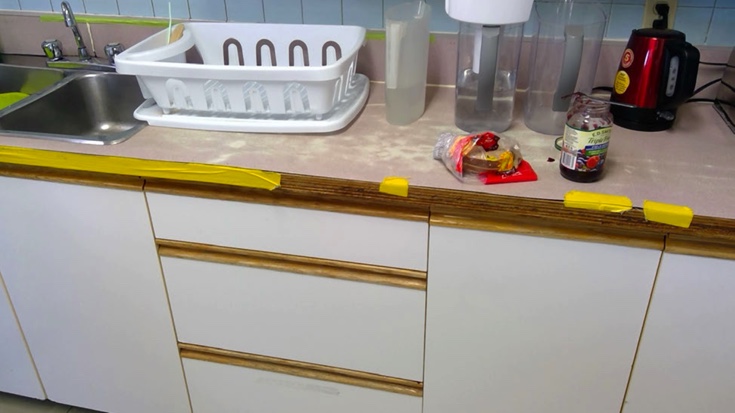 The Department of Health has closed the kitchen facilities of the Arviat Elders Home after it identified multiple building and food-handling deficiencies, a spokesperson announced Wednesday.

“The current condition of the kitchen no longer meets the standards required for food preparation for a residential care facility,” said Danarae Sommerville in a news release.

The decision to close the kitchen came after a routine inspection by an environmental health officer on Aug. 26, Sommerville said.

“Kitchen countertops are in very poor repair, and need replacing soonest. Kitchen is showing its age, so a complete renovation is needed. [I] was expecting that this would be completed on this inspection,” he said.

He also notes the floor is in poor condition and the ceiling “has holes where light fixtures were changed.” Photos included in the report show yellow tape being used to seal cracks in the countertops and along the counter edge.

The Arviat Elders Home has long awaited renovations. They were due to start in May but were delayed due to “challenges procuring the necessary supplies,” Sommerville said.

Nelson also listed several food-handling and food safety issues, including an insufficient number of sinks, the dishwasher not being used, a lack of proper handwashing, food being defrosted at room temperature, and no sanitizer being used.

He noted a sign above the kitchen sink in February telling staff not to wash their hands at that sink had been removed, but that some staff were still washing their hands in a bathroom sink when he inspected in August.

“Poor handwashing is an ongoing long-term deficiency at this facility,” he said, adding another sink needs to be installed, bringing the total to three sinks in the kitchen.

The Department of Health funds and contracts service provider Pimakslirvik Corporation to provide care and kitchen services at the centre.

Terri Okokpok is the manager of the Arviat Elders Home and oversees kitchen operations. In an interview Thursday, Okokpok disputed many of the claims the report made about poor hygiene practices and food-handling in the kitchen.

“We use the dishwasher, we wash our hands all the time,” she said.

She said the biggest issue with the kitchen is how run-down it is.

Okokpok said the kitchen hasn’t been renovated since the building opened more than 20 years ago.

Sommerville said the Department of Health will work with its partners to renovate and update the kitchen facilities “as soon as possible to bring it back into compliance.”

The Arviat Elders Home is owned and maintained by the Nunavut Housing Corporation, which was notified of the kitchen deficiencies in February after the first inspection, health department spokesperson Chris Puglia said.

“We are taking steps to ensure the facility can prepare food properly. We are installing a sink in the kitchen and conducting repairs of the countertop,” he said

He said the materials needed for a “more permanent solution” are expected to arrive in the next two months.

“We are working with the Department of Health to ensure these repairs are sufficient until a new countertop and sink can be installed,” Long said.

Hotel chain Inns North has been contracted to provide meal services temporarily to the Elders currently living at the facility, Sommerville said.