Pool below the falls closed to netting and snagging 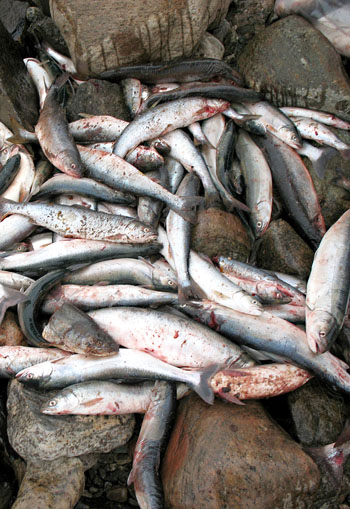 A pile of dead, rotting fish left by the shore of the Sylvia Grinnell River last summer. Over the past two years, Iqaluit residents have wasted at least 6,000 char through poor fishing practices. This year, the Iqaluit HTA banned netting and snagging near the falls. (FILE PHOTO)

Iqaluit, “the place of many fish,” may not live up to its name much longer if vandals continue to waste thousands of char on the Sylvia Grinnell River every year.

So the people charged with protecting local fish stocks have joined forces to try to put a stop to the kind of wastage that saw about 3,000 of the beautiful and tasty northern fish left to rot around the river mouth last summer — and another 3,000 the year before.

So far, the joint effort by the federal Department of Fisheries and Oceans, the Amarok Hunters and Trappers Association and Nunavut’s territorial parks department seems to be working.

As of Aug. 23, DFO area director Eric Kan said, less than 100 char were found rotting along the banks of the river.

“Wastage has been substantially reduced,” he said.

The DFO has been unable to identify any of the culprits or to figure out what would move people to perpetrate such sickening carnage, Kan said.

Catching and discarding that many fish is a lot of work, which would demand the participation of many people over a long period.

This spring the Amarok HTA passed a resolution banning both netting and snagging in the falls area.

The three-pronged approach to stopping the fish wastage includes:

The 6,000 fish found rotting along the banks of the river over the last two years were mostly caught by snagging along the river banks around the pool below the falls near the river’s mouth.

Kan said the fish are so thick at times when they congregate below the falls as they make their way back up river to spawn and overwinter, that they can be easily snagged by drawing a spoon with a treble hook through the crowded pool.

The falls can be as high as 3.7 metres at low tide, but the highest tides reduce them to not much more than a set of rapids, more easily navigated by the returning fish.

They come down the river as soon as the melting ice allows it, he said, usually in late June, then spend the summer in the brackish (mixed salt and fresh) water in the bay around the river’s mouth, fattening up on shrimp, cod and other marine animals.

Lewis is running a research project this summer, collecting data on the char with the aim of developing a management plan to keep the fish stocks healthy.

The same area was closed to netting and snagging from 2002 to 2006, after members of the HTA became concerned about reduced fish stocks.

There was noticeable recovery during the closure, according to association members.

But when the closure was lifted in 2007, it seems the carnage began again.