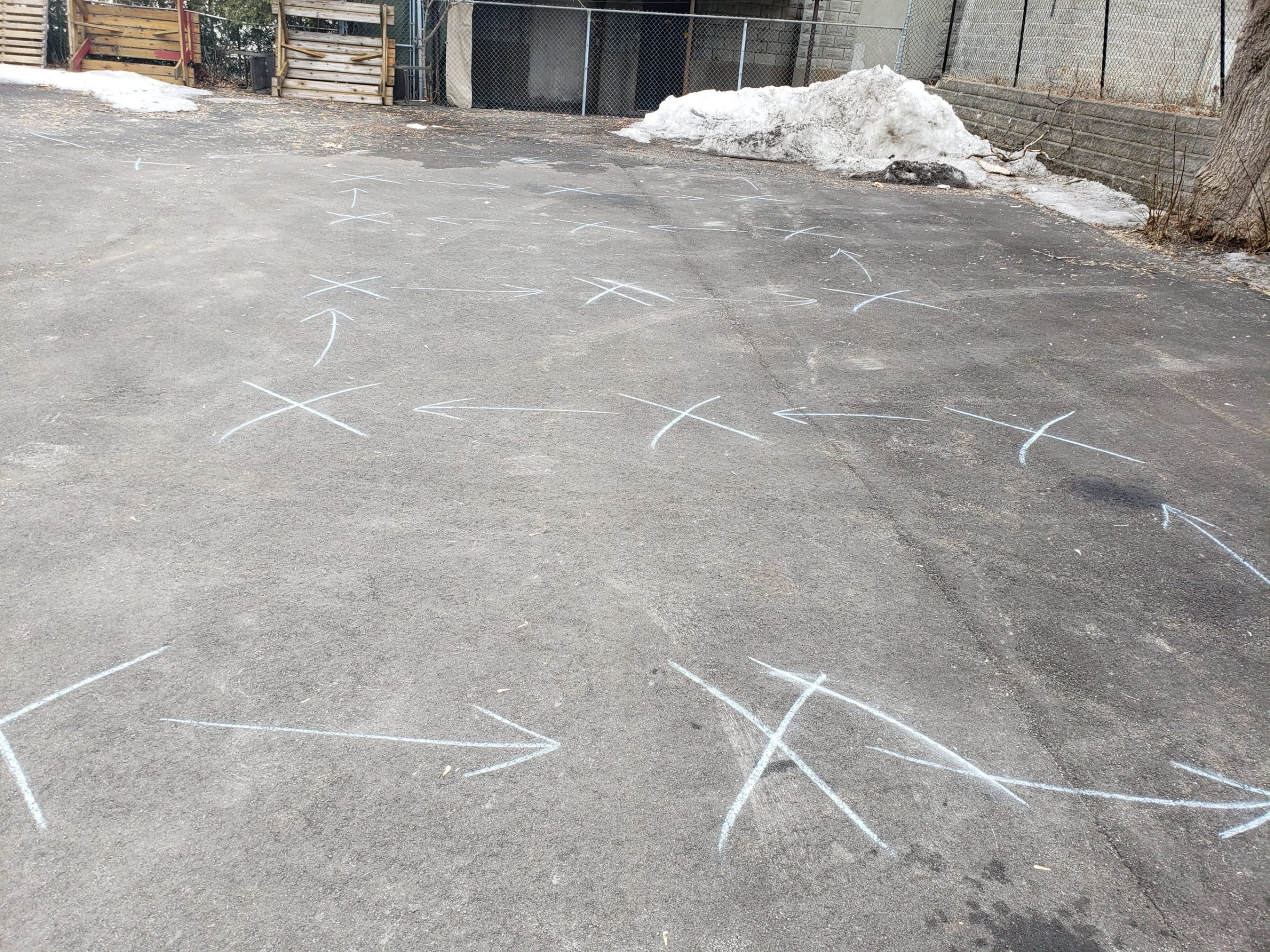 Before the final food hamper distribution by Tungasuvvingat Inuit, staff used chalk to mark the pavement of the parking lot of their office in Ottawa to ensure two metres of space between everyone who came. The organization has since shifted to giving weekly gift cards to clients. (Photo courtesy of TI)

Food security has become the major focus of Tungasuvvingat Inuit, the Ottawa-based organization for Inuit in Ontario.

About one-third of the 91 employees at TI have now turned their attention to making sure Inuit in their greater community have enough to eat, said Amanda Kilabuk, TI’s acting executive director.

Last month, as COVID-19 restrictions kicked in, TI shut down its public programs, which included the residential Mamisarvik healing program.

Since then, TI has tried to transform itself from a bricks-and-mortar service provider to one that still offers essential help, but at a safe distance.

“We wanted to make sure that our response to COVID-19 benefits everyone,” Kilabuk said.

A large part of TI’s activities now focus on improving food security, because of its positive impact on the health and well-being of the estimated 4,000 Inuit who live in and around Ottawa.

But under the measures now in place in Ontario, it was no longer feasible to hand out and deliver food hampers in Ottawa.

As TI decided to move away from its face-to-face model, it gave away all of its stock of dry goods and country foods, and then turned to distributing weekly gift cards.

These can be exchanged at food stores around Ontario. A family of up to five receives $100 a week, while a family of six or more receives $200 a week.

The distribution of the food cards mostly takes place electronically, although for those without internet, TI uses couriers to deliver physical cards.

Since TI stopped handing out hampers, the number of Inuit depending on TI for food has quadrupled, to 305 families and 50 singles.

More Inuit need help, Kilabuk said, because they may have lost their jobs or seen their hours cut due to COVID-19 shutdowns.

Most of the people who used to depend on TI’s food distribution lived around the Vanier neighbourhood, which is where the hampers were given out. “But now it’s really opened to up to Inuit across Ottawa and the region,” Kilabuk said.

The new food distribution program has also become a form of social outreach. Every week 19 IT staff call those who receive food cards to evaluate their needs.

“Each staff [member] has 15 families,” Kilabuk said. “Every week, they call them and check in and see if they need the food support, or have any other problems.”

And often those conversations touch on other issues, such as worries about COVID-19, housing, home schooling children, or dealing with domestic violence. On these issues and more, TI staffers help out, Kilabuk said.

The money for the food security program comes from a “hodgepodge” of sources, Kilabuk said.

Some funders of TI programs that had to be cancelled allowed the remaining part of the 2020-21 budgets to go towards COVID-19 measures and food security.

When restrictions against COVID-19 eventually lift in Ontario, things might take a while to get back to a new normal at TI, Kilabuk said.

For now, staff are talking about personal protective equipment and how to open up programs down the road.