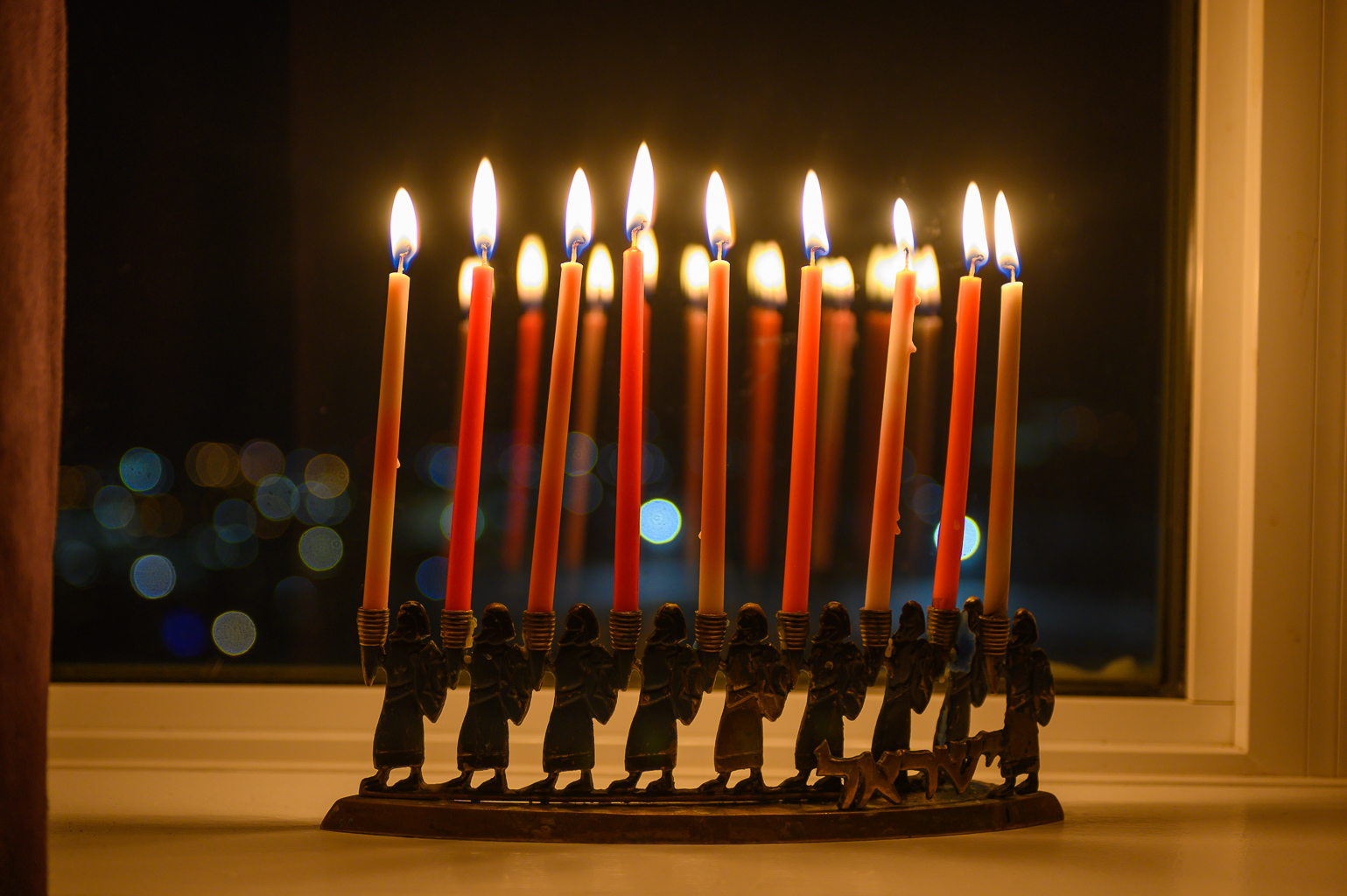 A Chanukah menorah, also called a chanukiah, sits in a windowsill with the glimmer of Iqaluit’s lights in the distance. Chanukiahs can come in all shapes and sizes and are characterized by eight branches with an additional offset ninth branch, called a shamash, which is used to light the other branches. (Photo by Dustin Patar)

December in Iqaluit is synonymous with many things: the lighting of the legislature, the Santa Claus parade and an exodus of the city’s many transients to the south.

For a small number of residents, December brings something else entirely, Chanukah.

Also known as the festival of lights, Chanukah is a Jewish holiday celebrated over the course of eight nights, each marked by the lighting of a candle and the reciting of special prayers.

“I think Chanukah is funny because it gets more popularity based on the fact that it’s around Christmas,” said Megan Levy-Mason, who grew up in Iqaluit as one of the city’s few Jews.

“It’s not the Jewish Christmas.”

Chanukah, like a lot of Jewish traditions and holidays, is based on a story of perseverance.

The tale goes that sometime in the second century BC, the Greeks, led by King Antiochus, occupied the land of Israel and had forbidden all Jewish rituals, instead forcing the Jews to accept Greek culture and beliefs.

In response, a small group of lightly armed Jews called Maccabees and their leader Judah fought back. Eventually, they drove the much-greater Greek occupying force from the land of Israel.

In the process, the holy temple in Jerusalem was partially destroyed, and when the Maccabees attempted to relight the temple’s seven-branched menorah, they only found enough oil to last a single day.

But the oil lasted a miraculous eight days, or so the story goes.

“We celebrate the miracle by lighting candles and eating oily food and telling stories and being with family,” said Levy-Mason.

In addition to latkes, some Jews, especially in Israel, also consume their fair share of sufganiyot, Hebrew for donuts, which are nearly identical to a powdered, jelly-filled donut from Tim Hortons.

While the coins are actually just foil-wrapped chocolates, called “gelt” in Hebrew, the prospect of winning a pile of them is thrilling nonetheless.

“It’s essentially a gambling game really when it comes down to it,” laughed Shara Bernstein, Levy-Mason’s sister-in-law.

“The object of the game would be to not lose all your gold coins.”

On each of the four sides are different Hebrew letters, all with different meanings.

The four letters do also have a deeper meaning.

They’re a mnemonic for the Hebrew phrase “nes gadol hayah sham,” which means a great miracle happened there. 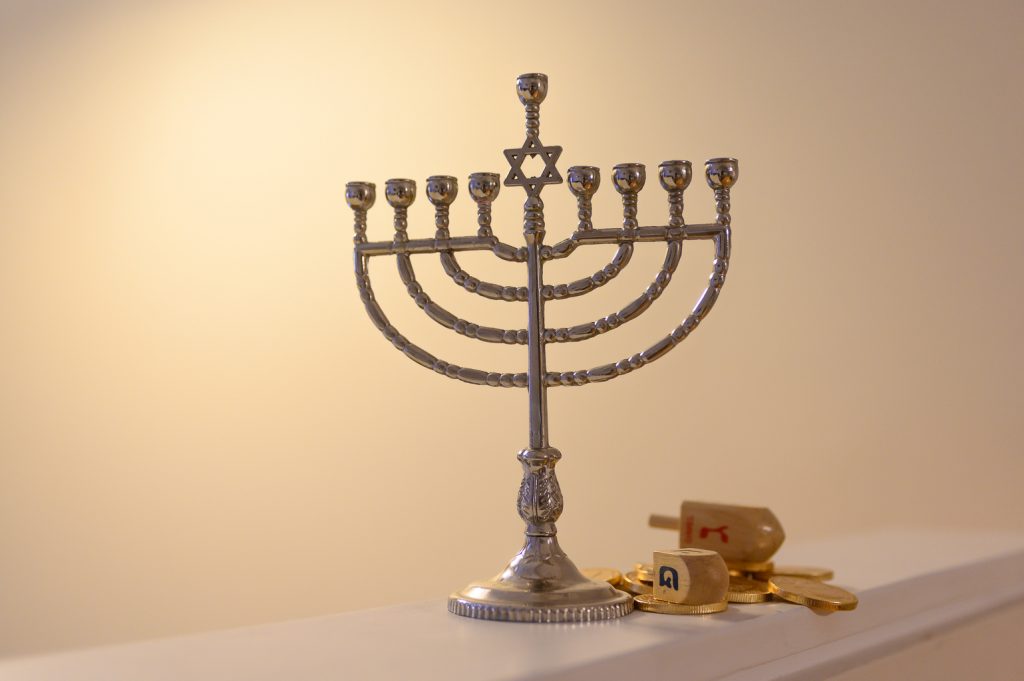 A more traditionally styled Chanukiah stands next to a pile of gelt and dreidels. (Photo by Dustin Patar)

But dreidel is a game that’s best played with a number of players, and in a city without many Jews, that can be difficult.

“Growing up here without other Jewish children, it’s kind of hard, you feel like you’re missing out a little bit on the culture and community,” said Levy-Mason.

Fortunately, in addition to Bernstein’s family, she’s recently found other Jewish families in the community.

For the pair, being some of the few Jews in the city is also a chance to introduce people to Jewish traditions.

“We’ve hosted Passover [another Jewish holiday] seders and one time everyone was Jewish and then we’ve hosted a Passover Seder where we were the only ones who were Jewish, but there were lots of other people around the table.”

“It kind of makes us a novelty in a way,” said Levy-Mason.

Celebrating in the North also comes with its challenges.

Like all Jewish holidays, Chanukah traditionally begins at sundown, but when that occurs before 2 p.m. the two mothers just go by time.

“When I was a kid, generally we would come home and after school, the sun would start to go down and then the fun would start,” said Bernstein, reflecting on celebrating in the south.

“Essentially, it’s the same thing here. We both have families and when the kids come home from school, and everyone settles in, that’s when we would typically light the candles and start the celebration.”

Other than the nightly lighting of candles, along with prayers, latkes, sufganiyot and dreidels, Chanukah can also be celebrated by gift-giving.

“Growing up, you can receive a gift on every single one of the eight nights, which is I think the big selling feature for Jewish families. Christmas is just one day, but we get gifts for eight days,” said Bernstein.

“As I got older the gift-giving was less of an important feature of the holiday. I might get one gift at the beginning or maybe a few in the first few days, but it was more about lighting the candles every night. This became the thing that was more fun than anything else.”

While Bernstein may not miss the gifts, she admits that there is one thing she misses from her childhood visits to family in Montreal during the holidays.

“You don’t drive around town seeing menorahs in the windows of houses,” she lamented.

“Which would be really nice here, because it’s so dark.”

This year Chanukah begins at sundown on Dec. 22 and runs until the evening of Dec. 30.