“We can forgive, but we will remember”

Crown-Indigenous Relations Minister Carolyn Bennett met with some of the surviving Ahiarmiut relocatees Jan. 22 before she made her official apology in Arviat the same day. 2019 marks 70 years before the group was first relocated from its homelands near Ennadai Lake. (Photo courtesy of Government of Canada) 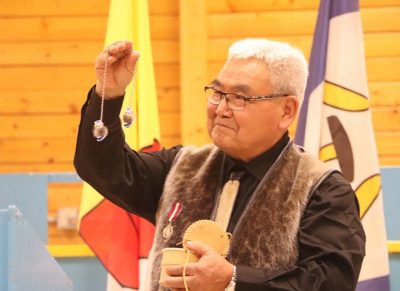 David Serkoak and a group of surviving relocatees helped to form the Ahiarmiut Relocation Society in 1998 as a way to document their history and to seek compensation for their losses. “It was very historic,” he said of the federal government’s Jan. 22 apology. (Photo courtesy of Government of Canada)

The Government of Canada has apologized to a group of Kivalliq Inuit and their descendants who were forcibly relocated from their homelands in the late 1940s and 50s.

The Ahiarmiut, a group of inland Inuit now largely based in Arviat, launched a process in 1998 to seek acknowledgement and compensation from the federal government for the hardships they suffered as a result of those multiple relocations.

“We are sorry. Mamiapugut,” Bennett said.

“Finally, we are sorry that it has taken so long to settle your relocation claim and to acknowledge the wrongs of the past.”

Bennett acknowledged the relocations were made under a “colonial mindset that ignored your deep ties to the land.”

In 1949, 80 families were moved from their homelands and hunting grounds around Ennadai Lake—the first of several relocations they would see over the 10 years that followed.

For the next decade families faced malnutrition, starvation and death.

By 1959, most of the remaining family members settled in communities along western Hudson Bay, including David Serkoak—who was about seven years old at the time—and his family.

Serkoak and a group of surviving relocatees helped to form the Ahiarmiut Relocation Society in 1998 as a way to document their history and to seek compensation for their losses.

He was in Arviat Jan. 22 to receive that long-awaited apology, an event he called both emotional and historic.

“From the first relocation from Ennadai Lake to Nueltin Lake [in 1949] to today, it took 70 years for this to happen,” Serkoak said.

“For us, it was the conclusion of all these terrible things we shared.”

The 21 surviving Ahiarmiut met privately with Bennett before she made her apology at Arviat’s packed community hall, with federal and Government of Nunavut officials and Inuit organizations in attendance.

Serkoak’s older brother, Silas Illungiayok, opened the event with a drum dance, while the eldest of the surviving Ahiarmiut, Mary Anowtalik, sang a traditional song.

Following the ceremony, the group unveiled a new plaque which will be installed near the RCMP building where relocatees were first held in custody when they were moved to Arviat—then Eskimo Point—in the late 1950s.

Originally, there were 67 surviving Ahiarmiut relocatees. At the time the Ahiarmiut Relocation Society filed their lawsuit with the federal government in 2007, only 23 remained.

Under the settlement, those 23 receive $100,000 each in compensation; two have since passed away and their money will go to their beneficiaries.

Another 167 direct descendants of those relocatees will each receive $3,000.

Some of the money will also be set aside as part of a compensation fund.

Serkoak, a retired teacher now based in Ottawa, is already working to deliver workshops to a younger generation of Ahiarmiut descendants who are now young parents, to ensure those stories are passed along.

“I want to give them a picture of our struggles,” he said. “I want them to know their history and to be proud.”

“Inuit, and also Ahiarmiut, are passionate people; we can forgive, but we will remember.”

Below, a list of the 21 surviving Ahiarmiut relocatees, all but one of whom attended the Jan. 22 event in person: