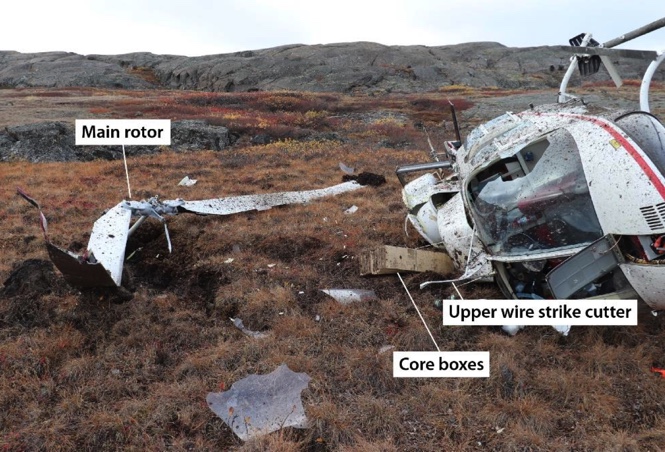 A report from the Transportation Safety Board of Canada is highlighting the hazards that can lead to dynamic rollovers following a fatal helicopter accident near Cambridge Bay last year.

“This fatal occurrence highlights how important it is for helicopter pilots to be vigilant with their flight controls when on the ground or light-on-the-skids to minimize the conditions that could lead to a dynamic rollover,” the report’s safety message states.

Released on Wednesday, the report concludes a TSB investigation into the Sept. 14, 2021 death of Darrin Steigel, a 42-year-old a driller at Agnico Eagle’s Hope Bay Mine site.

Steigel was fatally injured after being hit by rotor blade debris when a helicopter rolled over during a landing about 13 kilometres from the Doris gold mine, at Hope Bay. Steigel was on the ground when the Canadian Helicopters Ltd.,, aircraft, a Bell 206L-1 operated by one pilot, landed close by at around 3 p.m.

While landing, the pilot noticed Steigel was “in a crouched position” and was looking at the helicopter tail area, which caused the pilot to think that the aircraft’s tail may have been “in conflict with the upsloping terrain,” the report said.

When the helicopter landed and was in a “light-on-the-skids” position, the pilot removed his left hand from the collective — a control lever located beside the pilot’s seat — and then opened the right seat pilot’s door, leaned out and turned his head to look at the helicopter’s tail.

While the pilot’s head was turned, the helicopter began to roll over onto its right side, and the main-rotor blades hit the ground and broke apart, hitting Steigel.

A dynamic rollover is a potential hazard when operating a helicopter and can occur during takeoff, landing or while hovering. It can happen when angular momentum “causes a helicopter to roll or pivot around a skid or landing gear, rather than its centre of gravity, until its critical rollover angle is reached,” the report stated.

Once a helicopter reaches the critical rollover angle — generally 15 to 17 degrees from the ground — the thrust produced by the main rotor, combined with rolling momentum, “causes the roll to continue.”

The TSB report noted that the pilot was seated in the right seat of the aircraft, a cargo basket was installed on the right side and the helicopter rolled to the right. These factors, indicating a lateral centre of gravity on the same side as the direction of roll, may have “exacerbated” a dynamic rollover.

It concluded that the corrective action for a dynamic rollover is to gently lower the collective control, reducing thrust produced by the main rotor that causes the initiation of the rolling moment.

The Aero-Dyne engine monitoring system data was sent to the TSB Engineering Laboratory in Ottawa for analysis, which did not identify any abnormalities with the engine or rotor system. The report said that the helicopter was within the specified weight limitations for the flight.

The TSB, which did not travel to the accident site but relied on information from the Cambridge Bay RCMP coroner, investigated the incident for the purpose of advancing transportation safety, not to assign fault or determine civil or criminal liability.