A mining boom means draining lakes, constant dust and jobs for everyone 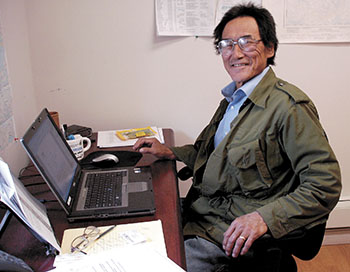 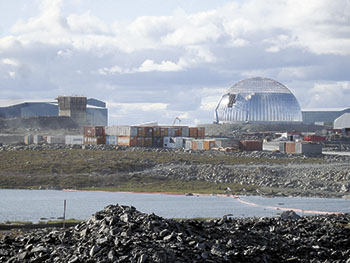 The rush is on to put Nunavut’s first gold mine into production by the start of 2010. A shiny silver dome (to the right), now under construction at Agnico-Eagle’s Meadowbank mine near Baker Lake, will protect gold-rich crushed rocks from the elements after they leave the crusher (to the left) and before they go to the large blue mill (to the far left) for processing. (PHOTO BY JANE GEORGE) 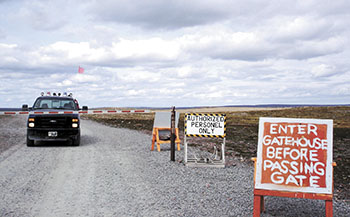 As it stands now, only company vehicles and those driven by four local Baker Lake residents, the mayor and three contractors, have the right to use the Meadowbank mine’s 110-kilometre road, a policy Agnico-Eagle, the mine’s owner, and people in Baker Lake want to see changed. (PHOTO BY JANE GEORGE) 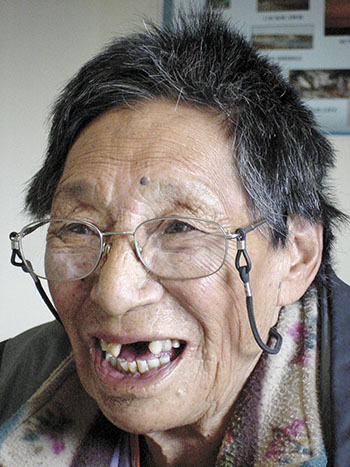 Baker Lake elder Elizabeth Paunga, 71, can recall wandering over the land which is now undergoing a transformation into a mine. (PHOTO BY JANE GEORGE) 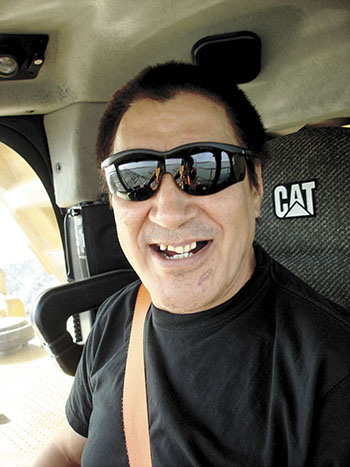 MEADOWBANK MINE (APUTINAATUQ) — After Moses Tookanachiak checks his 100-tonne truck’s load of giant rocks, he drives off in a cloud of dust to dump the boulders at the end of a dike under construction.

Eight huge trucks make this haul night and day at the Meadowbank mine site, about 70 kilometres north of Baker Lake, where land is being moved, and lakes dammed and drained to make way for open pit mines.

The non-stop activity is part of a $700-million investment by the mine’s owner, Quebec-based gold producer Agnico-Eagle, to get the Meadowbank gold mine— Nunavut’s first— into production by early 2010.

Starting up a mine in Nunavut is as hard as in the African nation of Congo, according Denis Gourde, the mine’s manager: the climate is hard, it’s expensive to do business and the regulatory system is tough.

Agnico-Eagle faces a difficult balancing act in its efforts to keep everyone — workers, local communities, investors and government regulators — happy as the mine ramps up to produce at least 10,000 ounces of gold a day over the next nine years.

Back then, lakes and hills were known by their Inuktitut names. Today, these once-familiar features bear names like Portage, Goose Bay, Stormwater, Vault and Mirage.

But Paunga says she’s happy because people in Baker Lake, like her son, can earn money and eat well at the camp, where the typical evening menu includes strip-loin steak, fish, cabbage rolls, soup, a salad bar and desserts.

“It will help us older generation, but it will help the youth, too,” says heavy equipment operator Tookanachiak, 52, who earns about $78,000 a year.

Sporting sunglass and a big smile as he drives his truck, Tookanachiak is one of 171 Inuit workers at Meadowbank.

About 44 per cent of the Agnico-Eagle’s 388 workers are Inuit. The rest are mainly French-speaking Québécois, as are most of the 527 contract workers on site.

The mine’s official language is English, but Tookanachiak jokes that he often uses sign language to communicate — just like his parents did with early newcomers.

Aldo, the Québécois worker whose shovel scoops up the rock which Tookanachiak dumps, doesn’t speak much English. That’s not a problem for Tookanachiak.

“I got to make friends or else the work gets harder,” he says.

But adapting to Meadowbank’s schedule can be rough.

Workers put in 168 hours on the job over 14 days of 12-hour shifts before they get a break of two weeks.

Crises at home and jealous spouses make it impossible for some local workers to remain at the mine site.

Others quit after a few months because they don’t want to pay more rent for social housing: the $62,000 that a kitchen assistant can earn doesn’t seem like much when faced with a substantial monthly increase in rent.

On the positive side, Michael Haqpi, Agnico-Eagle’s liaison officer in Baker Lake, says the community already has a “good connection” with the company — despite a dispute over the $55-million 110-km road, which was finished last year and runs from Baker Lake to the mine site.

Designated a private road, which is supposed to be erased when the mine wraps up operations in 2019, hunters now say they want to use the road and keep it.

Agnico-Eagle has asked the Nunavut Impact Review Board for a regulatory change that will lead to “controlled access.”

This would allow the hunters and trappers organization to hand out permits. Hunters would then stop at the gatehouse for special vests and flags for their vehicles before heading down the road.

Baker Lake residents produce other complaints about the road, saying it runs through the best hunting grounds and truck traffic disturbs wildlife, coats the town in dust, and produces noise.

Other critics of the mine say more re-supply barges through Baker Lake mean less fish and more water pollution, and they allege workers from the outside encourage promiscuity among young women and spread sexually-transmitted infections.

Baker Lake is fast on its way to becoming a dirty mining town, they say.

Under the Inuit impact and benefits agreement, Agnico-Eagle won’t hand out profit-sharing cheques Inuit in Baker Lake and other Kivalliq communities, as the Raglan nickel mine does in Nunavik.

Instead, beneficiaries can reap millions from service contracts and receive priority for mine jobs.

Agnico-Eagle doesn’t even hand out T-shirts and hoodies the way Cumberland Resources, the mine’s former owners, did, some also complain.

But more giveaways are not in the cards, says Martin Rioux, the mine’s human resources superintendent.

“We don’t want to buy people, we want them to respect us,” he says.

There have been some missteps along the way. Every year Agnico-Eagle hands out goodies at Christmas. The company also throws a BBQ every summer— set for August 19 this summer.

For last summer’s BBQ, the company ordered in the Quebec barbecue favourite, méchoui.

But Inuit were put off by the sight of an unfamiliar skinned animal rotating on a spit over a fire, and headed instead for the hotdogs and hamburgers.

And management vows to build teamwork between Inuit and non-Inuit.

Off the job, Inuit and Québécois workers already hang out around together in the camp’s corridors or in the outdoor “smoke shack.”

After supper, Doug Angukalluq of Baker Lake teaches a French-speaking co-worker how to balance toothpicks on his fingers and make them appear to move by themselves.

If these two can do this, anything is possible at Meadowbank, n’est-ce-pas? 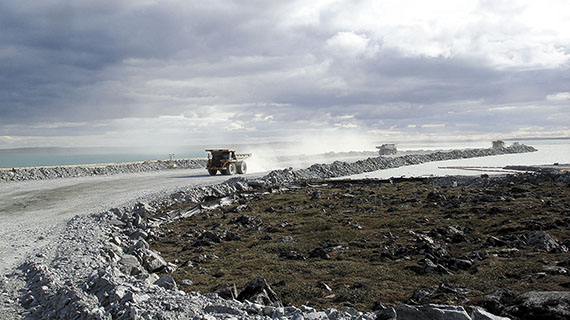 Massive 100-tonne trucks move rocks from a former lake bed over to a dike under construction. The Meadowbank’s gold lies under lakes, which must be drained and dammed before the deposits can be mined. (PHOTO BY JANE GEORGE)