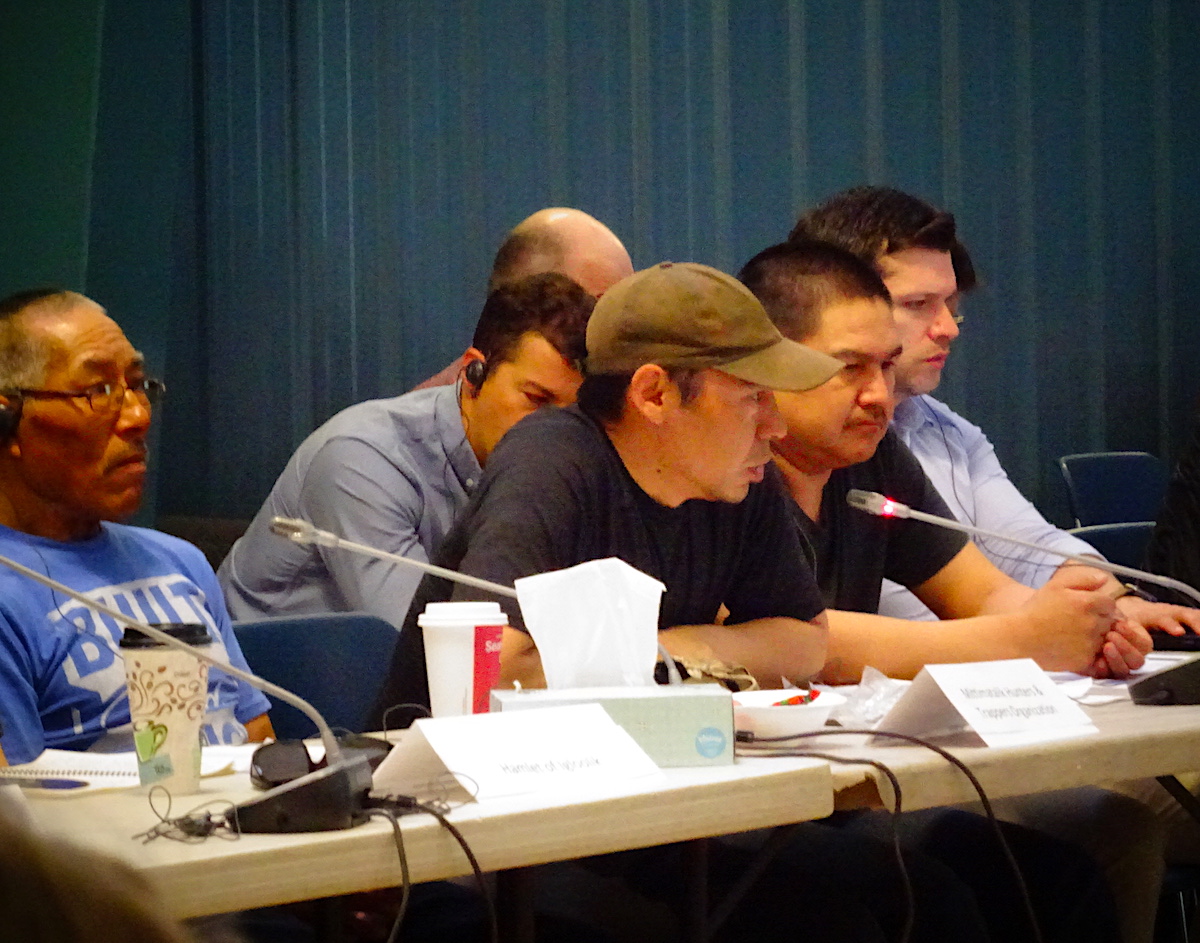 Enookie Enuarak of Pond Inlet speaks last June in Iqaluit at the Nunavut Impact Review Board’s technical meeting on Baffinland Iron Mines Corp.’s plans to expand its Mary River mine. Enuarak said in 2018 that belugas and narwhals had abandoned Eclipse Sound after the ice breakup. The disappearance of the whales was “a huge loss to our community,” he said. Ottawa has since decided to allow the mine to keep up its increased production until December 2021, but it must collaborate with a working group to carry out more marine environment monitoring. (File photo)

Baffinland Iron Mines Corp. received some welcome news on Monday, May 25: the Nunavut Impact Review Board said the company had received the federal ministerial approval it needs to continue with its current production level of six million tonnes of ore from the Mary River iron mine for another 18 months, until December 2021.

In March, the NIRB had approved Baffinland’s request for an extension to its current production level, but the ministerial approval now gives the regulator’s request the official go-ahead it needs.

“The responsible ministers and I have carefully considered the board’s report and recommendations … and have decided to accept the recommendation that the transportation and shipping of six million tons of iron ore per year along the tote road and through Milne road be allowed until Dec. 31 2021,” said Northern Affairs Minister Dan Vandal in his May 19 letter to the NIRB.

Vandal and the other federal ministers said Baffinland’s extension request could proceed, but with some specific terms and conditions to improve marine mammal monitoring.

That gives the company time to go through hearings for its planned phase two expansion.

In its phase two proposal, Baffinland wants to build a 110-kilometre railway from Mary River to Milne Inlet, increase production from six million to 30 million tonnes of ore per year, and increase ship transits to 176 each season.

While that expansion request was under consideration by the NIRB, Baffinland had asked for one-year extensions in 2018 and 2019 from 4.2 million tonnes to its current production limit of six million tonnes per year. But the most recent extension expired on Dec. 31, 2019.

A second attempt to hold meetings via teleconference was recently rejected by intervenors.

Without the extension granted this week, Baffinland’s annual production limit would have been required to fall back to 4.2 million tonnes a year, as set out in the original version of the project certificate rules that govern the company’s “early revenue phase” for moving iron ore by truck to Milne Inlet.

Baffinland had wanted a decision on the production extension by the end of February for the 2020 shipping season. But the pandemic appears to have pushed that date to May.

In his May 29 letter, Vandal said the federal ministers had considered the socioeconomic impacts of not allowing the project to proceed at its current level, such as loss of local employment if “further demobilization” were to occur.

But they added a requirement, saying Baffinland must carry out more impact and monitoring collaboration with a marine environment working group.

“Doing so will provide Fisheries and Oceans Canada and other working group members with a more effective marine management, especially to marine mammals, while still allowing for the increased level of shipping as proposed,” Vandal said.

They also imposed a requirement saying that Baffinland must “track, report on and explain any failure to implement the working group suggestions or direction from Fisheries and Oceans Canada.”

That should respond to environmental concerns about the expansion raised by community interveners at technical hearings last June.

The NIRB has now asked the parties to review the draft amended project certificate and for regulatory authorities to provide comments by June 8.

The NIRB said it expects to release the final project certificate amendment by June 18.