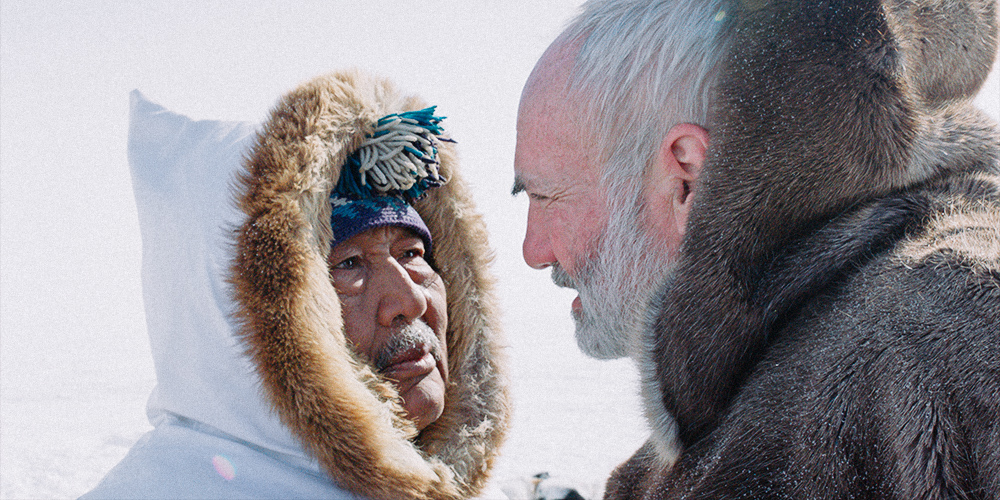 Noah Piugattuk (Apayata Kotierk) and the government man known as Isumataq (Kim Bodnia), in a scene from One Day in the Life of Noah Piugattuk. (Courtesy Toronto International Film Festival)

There is something so familiar in Noah Piugattuk’s character: an elder who is firm and particular, but soft and flecked with humour.

Portrayed by Apayata Kotierk, it’s his story that leads Isuma Productions’ latest film, One Day in the Life of Noah Piugattuk.

The film is a glimpse of a person’s life, right before it changes completely. He sees it happening: “They say one day we’ll all be speaking English,” he tells another character early into the film.

Then adds: “At least it’s a beautiful day now.”

Born in 1900, Noah Piugattuk was a part of a nomadic Inuit band from Kapuivik, on northern Baffin Island. They lived in sod houses and hunted by dog team.

The film was shot at the Kapuivik camp and takes place in the spring of 1961. Director Zacharias Kunuk would have been three years old at the time, born in one of the sod houses, to a family in Piugattuk’s camp.

A hunting group of mostly men, along with Piugattuk’s daughter and her friend who asked to come along, head out sealing by dogsled.

They come to a stop as his dogs untether.

“While we have this beautiful weather, let’s have tea,” Piugattuk tells them, in front of an iceberg piercing the snow cover.

Just that morning, Piugattuk and his wife had remarked how much better tea tastes with water from an iceberg; You hardly need sugar—luckily, as they had run out.

Another dogsled pulls up while they’re stopped, carrying a white man, played by Kim Bodnia.

He has a box of food to share, including biscuits and jam, and sugar.

Ultimately, he’s there for the government, to share the message that the nomadic people must move into Igloolik. Asking ‘When will you move?’ is his purpose for being there.

During the Cold War, wooden houses had been built in the settlement and the government was set on centralizing the population. Children would go to English schools, and if they didn’t, their parents would forfeit a family allowance.

The white man was known as Isumataq, meaning Boss, or literally ‘he thinks for us.’

Much of the film is made up of the interaction between Isumataq and Piugattuk, through an Inuit translator, played by Benjamin Kunuk. His discomfort as the mediator between the two men is palpable.

He is just there so people know what Isumataq is saying, he reminds them. He doesn’t want it mistaken for association.

Isumataq is frustrated that Piugattuk won’t give him an answer.

“This is not a question anymore,” Isumataq tells Piugattuk. “You have no choice.”

The conversation plays out across Piugattuk’s face on the ride home and the weather has worsened over the course of the day. He has a cup of tea back at his sod house, with two spoonfuls of sugar stirred in.

As people around the world are forced from their homes by conflict and natural disasters that scream across television screens like an action movie, One Day in the Life of Noah Piugattuk portrays the devastation of forced relocation without showing a single person losing a home.

In 1966, Zacharias Kunuk moved from Kapuivik to Igloolik for school; Piugattuk and his family had already moved in. Piugattuk passed away in 1996 at 96 years old.

One Day in the Life of Noah Piugattuk showed this year at the Venice Biennale, an international arts exhibition.. It screened at the Toronto International Film Festival for media and industry on Sept. 5, with a public showing on Sept. 13 at the Wintergarden Theatre.