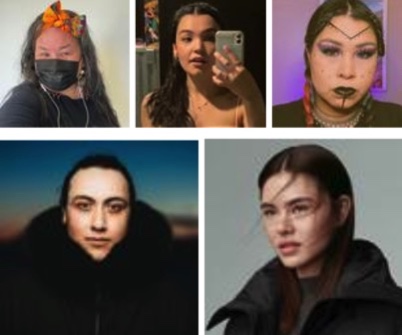 Among the 40 Indigenous creators selected, five are Inuit, according to the release from TikTok.

Angela Aula (@inuk.beauty) boasts 12,000 followers on her TikTok account, where she posts makeup and beauty tips. Originally from Nunavut, Aula has lived in Toronto for close to 30 years. “I try my best to represent my people any way that I can, doing makeup is one of them,” she said in a media release.

Braden Kadlun Johnston, 23, (@kadlun) shares personal accounts of his past battles with drug addiction and his recovery journey to his more than 109,000 followers.

“TikTok has become a creative outlet for me to express my journey through addiction and mental illness,” he said in a statement on the program website.

“It’s also been the mediator in my reconnection process with Inuit culture with my mother.”

Johnston grew up in Yellowknife but was born in Kugluktuk, and currently lives in Calgary where he attends Mount Royal University.

Brendalynn Trennert of Yellowknife, who also goes by Inuk Trennert, (@inuk360) shares behind-the-scenes footage of her work in fashion and design with her nearly 27,000 TikTok followers. She has decades of experience in sewing, and often posts videos of her jewelry available through her Inuk360 online shop.

In a statement, Trennert said she tries to use her social media to bring awareness to issues like mental health, suicide prevention, breaking the silence on domestic violence and drawing attention to missing and murdered Indigenous women and girls.

“And as an Indian Residential School Survivor, [I work] hard to have quality of work over quantity and learning how to not only survive but to thrive,” she said.

She often posts videos of her singing original songs and covers and makes videos about her Inuit culture. She hopes to create an Inuit musical inspired by her own experiences and inspiration from traditional Inuit legends, she said in a statement.

Model Willow Allen (@willow.allen), from Inuvik, already has an impressive following of 500,000 on the platform.

Her modelling work has landed her on the cover of Elle Canada magazine and she’s appeared in campaigns for Canada Goose and Christian Louboutin.

Allen shares personal updates from her life and snapshots from her work in the fashion industry on her account.