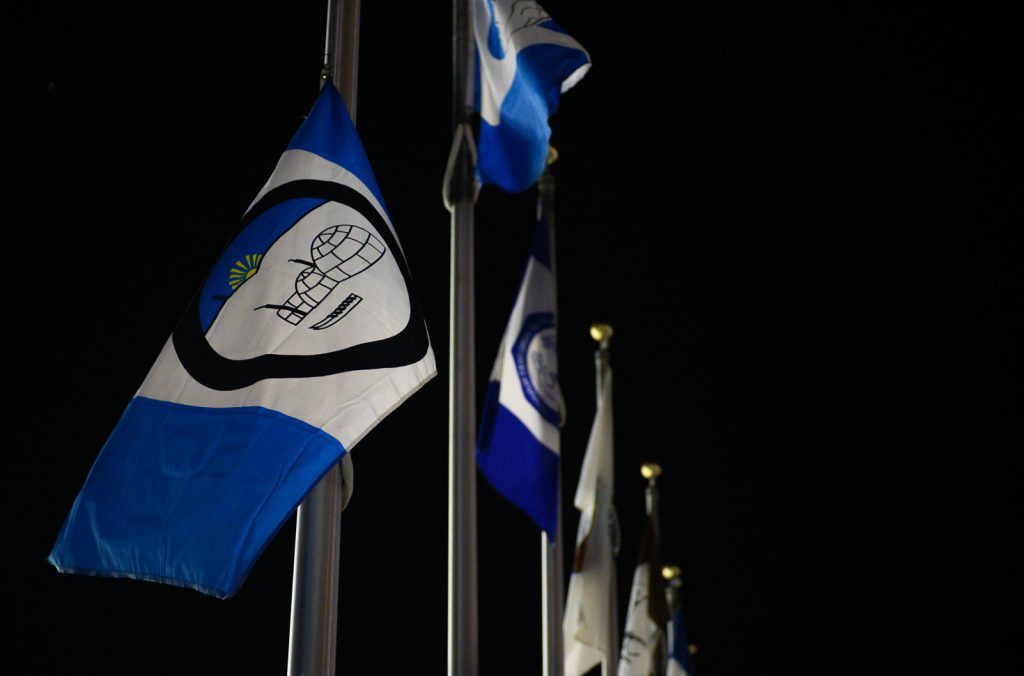 The community flag of Sanikiluaq flies at half-mast in front of the Nunavut legislature on the evening of Wednesday, Nov. 20, in honour of the former MLA and cabinet minister Peter Kattuk, who died that morning after a long illness. (Photo by Dustin Patar)

Sanikiluaq’s community flag is flying at half-mast this morning in front of the Nunavut legislative assembly building in Iqaluit, out of respect for the late Peter Kattuk of Sanikiluaq, who died on the morning of Nov. 20 after a long illness.

Kattuk, 69, a highly respected MLA, mayor and community leader in his hometown, became part of the territory of Nunavut’s history on Feb. 15, 1999, when voters in the constituency of Hudson Bay chose him to sit in Nunavut’s first legislature, which held its first sitting on April 1 that year. 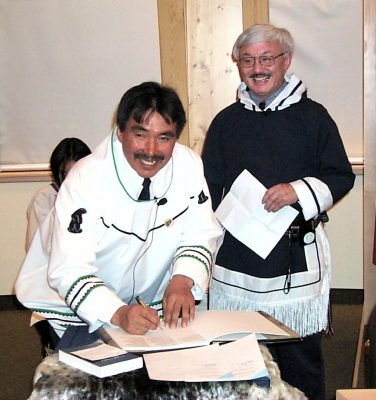 The late Peter Kattuk (left) with former Nunavut Commissioner Peter Irniq on April 12, 2000, when Kattuk was sworn into the Nunavut cabinet. (File photo)

During the life of the first legislative assembly, Kattuk became minister of culture, language, elders and youth on April 12, 2000, replacing Kugluktuk MLA Donald Havioyak, who had resigned from the post.

On Dec. 17, 2001, Kattuk moved from that portfolio to become minister of public works and government services, where he served until 2004.

Also in 2004, Sanikiluaq voters re-elected him to the Hudson Bay seat, where he sat as a regular MLA until 2008.

“Peter represented the constituency of Hudson Bay for two terms and I join his family and former constituents in mourning his passing,” Nunavut Speaker Simeon Mikkungwak said in a statement.

Born on June 2, 1950, Kattuk served for many years in Sanikiluaq as an environmental activist, mayor and community leader.

In the early 1990s, he was part of the Sanikiluaq Environment Committee, which gathered local knowledge related to how huge hydroelectric dams constructed in nearby northern Quebec had affected sea ice and marine life around the Belcher Islands.

That led to a well-known report called Voices from the Bay: Traditional Ecological Knowledge of Inuit and Cree in the Hudson Bay Bioregion.

As mayor of Sanikiluaq, Kattuk also spoke out against the now-defunct Great Whale hydroelectric dam proposal. 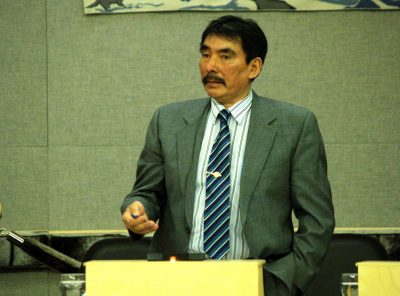 The late Peter Kattuk speaks in the Nunavut legislature on Feb. 19, 2008, near the end of his second term as MLA for Hudson Bay. (File photo)

That group, formed by the Government of Nunavut, Nunavut Tunngavik Inc. and the Hamlet of Sanikiluaq, monitored marine conditions around the Belcher Islands in response to a second hydro dam proposal, also put on hold since that time, involving the Eastmain and Rupert Rivers.

And in 1996, Kattuk served on the Nunavut Water Board, a body created by the 1993 Nunavut land claims agreement.

Kono Tattuinee, the president of Arctic Co-operatives Ltd., remembers Kattuk as “quite an extraordinary kind of guy,” who introduced Tattuinee to sea urchins, a local delicacy in the Belcher Islands.

When Paul Okalik, then the Nunavut premier, appointed Kattuk as minister responsible for the old Department of Culture, Language, Elders and Youth in April 2000, he said Kattuk promoted Inuit Qaujimajatuqangit long before it became fashionable.

“Peter participated in a study of traditional knowledge long before it was a hot topic,” Okalik said at a news conference in April 2000.

After becoming public works minister in 2001, Kattuk had to deal with the notorious “bad gas” uproar.

That happened after the Northern Transportation Co. Ltd. had shipped gasoline supplies to Nunavut that destroyed snowmobile engines all over the Baffin and Kivalliq regions.

In that role, Kattuk presided over another controversy: the Government of Nunavut’s decision to drop NTCL and award its lucrative annual fuel resupply contract to the Woodward Group of Labrador.

He sought re-election to the legislature in October 2017, but finished third behind Alan Rumbolt.

“Peter was well-respected for his commitment to public service and his environmental advocacy,” Mikkungwak said in his statement.