Glaciers that feed the North Water Polynya are rapidly retreating 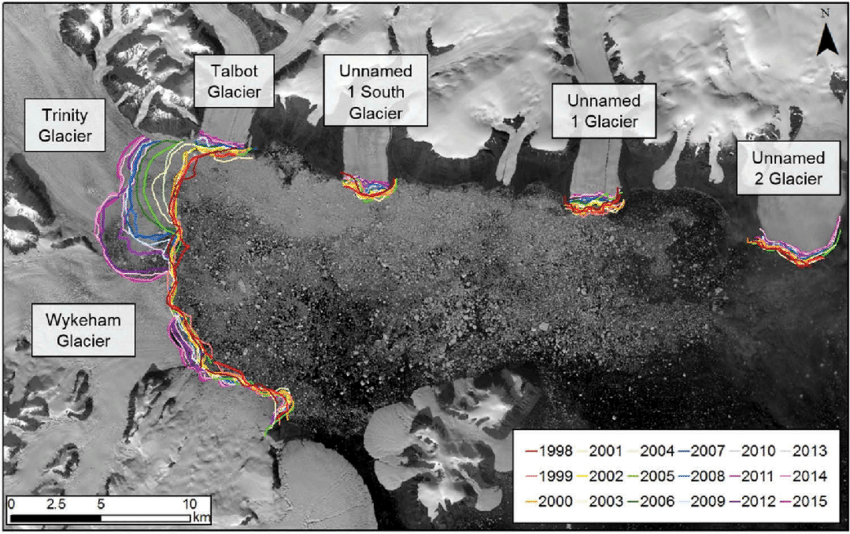 This image from the scientific paper “Iceberg production and characteristics around the Prince of Wales Icefield, Ellesmere Island, 1997-2015” shows the terminus outlines of Trinity-Wykeham and other glaciers in Talbot Inlet on Ellesmere Island from 1998 to 2015. (Image courtesy of USGS/NASA Landsat)

About 150 kilometres north of Grise Fiord on Ellesmere Island, two glaciers are rapidly receding from the seawater at their edge.

The terminus of these glaciers is a fiord that empties into Pikialasorsuaq, the North Water Polynya—an area of year-round open water that’s the largest of its kind in the Arctic.

This ecosystem supports seabirds as well as marine mammals, including narwhal, beluga and bowhead whale.

As the surface of the Trinity and Wykeham glaciers melt and as they calve icebergs, it’s the polynya they’re feeding.

Trinity and Wykeham have been studied for about 20 years, said Luke Copland, professor and university research chair in glaciology at the University of Ottawa. His first visit to the area, on the eastern side of Ellesmere Island, was during his PhD research in 1997.

The two glaciers begin in different places and then join before terminating at North Baffin Bay. (They’re referred to as marine terminating or tidewater glaciers.)

The years of study of these glaciers—plus the added use of satellite technology for tracking glacial change—have painted a picture of Trinity-Wykeham that distinguishes them from other glaciers in the Canadian Arctic archipelago.

And the rate at which their contribution of icebergs grows is indicative of how fast these glaciers are retreating—a level of instability that’s unusual in Canada’s Arctic.

“Glaciers are like rivers in slow motion,” said Copland.

They flow as the weight of the glacier presses down on its internal ice, deforming it and causing it to spread, as well as by sliding on meltwater or on the soft base beneath the glacier.

In the Canadian Arctic, glaciers move on average between 100 and 200 metres per year.

Already in 2000, Trinity and Wykeham were outpacing the rest, moving between 400 and 500 metres per year.

Today, scientists are clocking the movement of the two glaciers at up to 1.2 kilometres per year—double to triple the speed of a decade ago, said Copland.

And as the tidewater glaciers move, they calve and retreat in that ocean water

Contributing to their instability is the fact that Trinity and Wykeham are grounded on the bedrock far below sea level, meaning only the weight of the glaciers above is anchoring them in place, preventing them from lifting off from the seabed and floating freely.

“Most glaciers grounded below sea level for much of their length have a sill, where bedrock comes up relatively close to the surface,” said Copland.

“For Trinity-Wykeham, there’s no evidence of that. There’s nothing to hold them in place.”

From their terminus, the glaciers are grounded solely below sea level for 40 kilometres.

That means as they melt and thin, the glacier’s anchor gradually lifts.

Water from the North Atlantic

Another factor affecting these two glaciers in Canada’s Arctic is that the ocean water is seemingly warming at great depths—more than about 200 metres below the surface—due to the influx of warm water from the North Atlantic.

This may be causing melt at the base of very large glaciers.

“Because they have this situation of being really thick and below sea level, they’re kind of uniquely, potentially affected by this deep warm water,” Copland said.

It’s something his team hopes to glean more information about from oceanographic sensors placed in the fiord where the glaciers terminate.

But what exactly this all means for Pikialasorsuaq is not fully known.

“Understanding scientifically why these glaciers are changing, even that in itself isn’t particularly understood,” said Copland.

“It’s very easy to access surfaces but the really dynamic stuff is happening underneath. When water flows, all of that happens at the underside of the glacier.”

The present-day impacts of the glacial change include effects on ice production—an increase of freshwater in the polynya may allow sea ice to form faster. But, Copland said, so far an influx of freshwater doesn’t appear to be happening on the Canadian side to the extent that it is in Greenland.

Nonetheless, the additional of freshwater would affect the ecosystem of the polynya.

There’s also the question of sea level rise. Around the world, Copland said, the greatest contributor to sea level rise over the past several decades has been glaciers and ice caps.

On a regional scale, every year since 2002, satellites have measured gravitational attraction at the earth’s surface here, or on the mass of glaciers weighing down on that surface.

With climate change and a warming atmosphere, there is also an increase in the surface melt of glaciers.

Interestingly, this can have two very different outcomes: either that meltwater trickles through the glacier and lubricates its underside so there’s greater sliding, increasing its movement; or the loss of the surface layer decreases the mass of the glacier, slowing its pace of movement.

What is known with certainty is that there was a gradual retreat of glaciers in the Canadian Arctic, including eastern Ellesmere Island, up until the year 2000, with little sign of that pace changing.

From then, up until 2015, there was a five-fold jump in that rate of retreat.

The increase in air temperature has been the main driver behind this, Copland said, which has been primarily caused by rising CO2 levels in the atmosphere.

And the only recourse is lowering CO2 emissions to curb the increase in the atmospheric temperature.