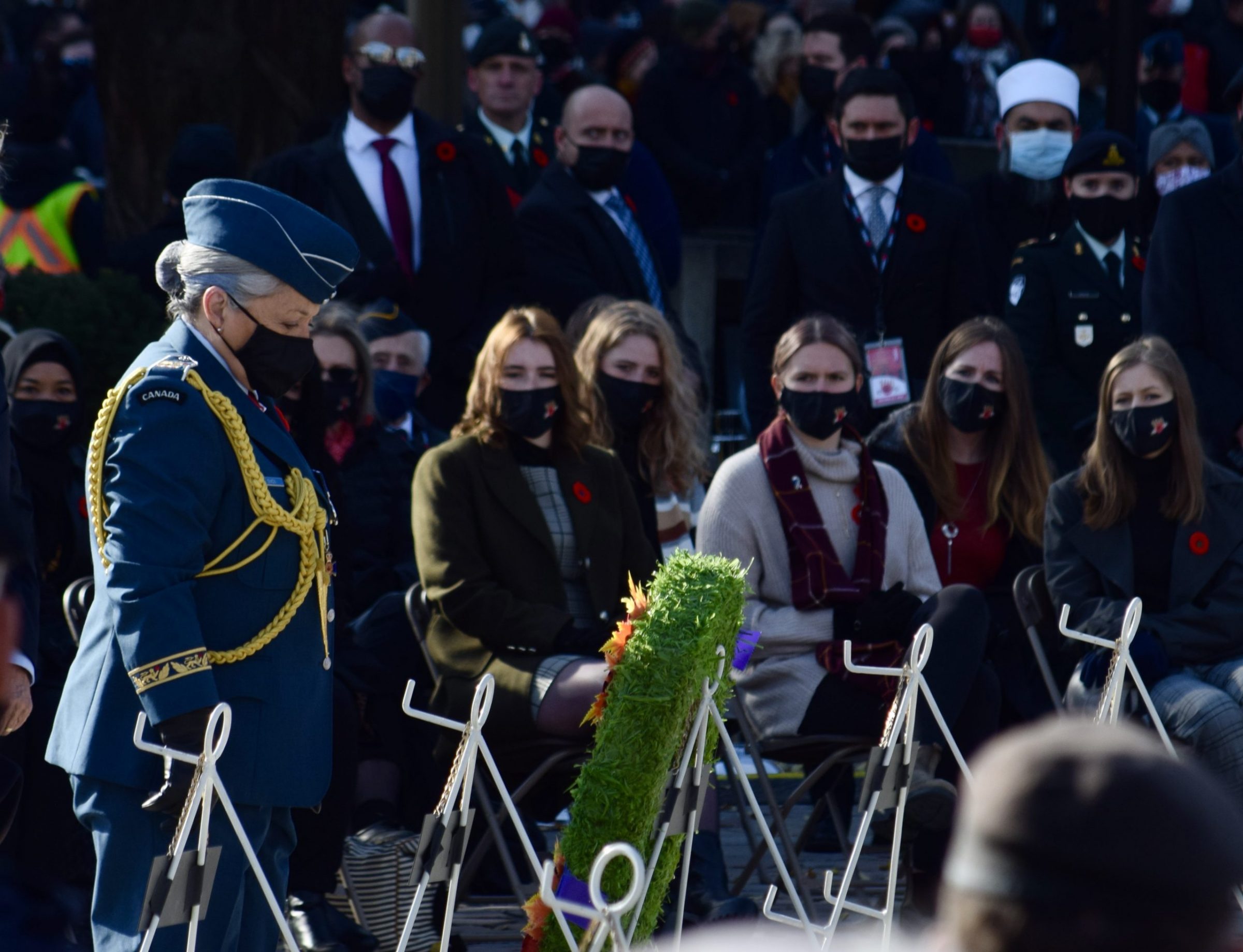 Gov. Gen. Mary Simon lays a wreath at the National War Memorial in downtown Ottawa on Nov. 11 at the annual Remembrance Day ceremony. “We honour the long history and sacrifice of Indigenous peoples in uniform, some of whom would never again see their ancestral land,” she said in a message to media ahead of the ceremony. (Photo by Madalyn Howitt)

Hundreds of onlookers watched as Gov. Gen. Mary Simon attended her first Remembrance Day ceremony as commander-in-chief of the Canadian Armed Forces in Ottawa on Thursday.

After laying a wreath at the memorial while a 21-gun salute rang through the air, Simon took her time greeting veterans and chatting with attendees.

In a nod to tradition, Simon chose to wear a Royal Canadian Air Force uniform during the ceremony. As the Queen’s representative in Canada, Simon is also the commander-in-chief of the Canadian Forces, and therefore has the option to wearing a uniform as part of her role in the chain of command.

Past governors general who have opted to wear a military uniform on Remembrance Day include Michaëlle Jean and Julie Payette.

In another nod to the military, Simon’s husband, Whit Fraser, wore a bowtie featuring the tartan of the Royal Canadian Air Force. 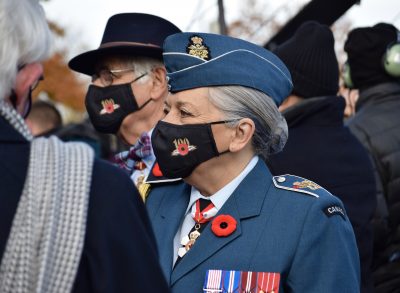 Gov. Gen. Mary Simon speaks with veterans at the National War Memorial in downtown Ottawa during the Remembrance Day ceremony on Nov. 11. Simon opted to wear a military uniform as part of the proceedings, while her husband Whit Fraser (background) wore a bow tie featuring the tartan of the Royal Canadian Air Force. (Photo by Madalyn Howitt)

In a message released to media before the ceremony, Simon paid tribute to veterans of Canada’s war and their families.

“On Remembrance Day, our thoughts turn to Canadian veterans who fought for our freedom and values. Who served far from home, in peacekeeping missions and in horrific wars. Who came home, never the same, or never came home at all. We remember their families and loved ones,” she said.

Simon, an Inuk leader who became the first Indigenous person to hold the vice-regal post earlier this year, took care to note the legacy of Indigenous veterans specifically.

“We honour the long history and sacrifice of Indigenous peoples in uniform, some of whom would never again see their ancestral land,” she said.

“I would like to thank all Canadians who have taken it upon themselves to lead in remembrance, particularly young Canadians,” she added. “As Governor General and commander-in-chief, my thoughts are with all veterans and active military members — anyone who has worn a uniform in defence of Canada. Lest we forget.”

This year, members of the public were encouraged to attend the ceremony in person, although attendees were asked to wear masks and adhere to public health measures. Crowds gathered around the war memorial in downtown Ottawa to catch a glimpse of the procession of dignitaries and veterans.

It was a stark difference from last year’s muted ceremonies, which were held virtually due to pandemic restrictions on public gatherings.