Lost and discarded fishing gear is an environmental and economic problem 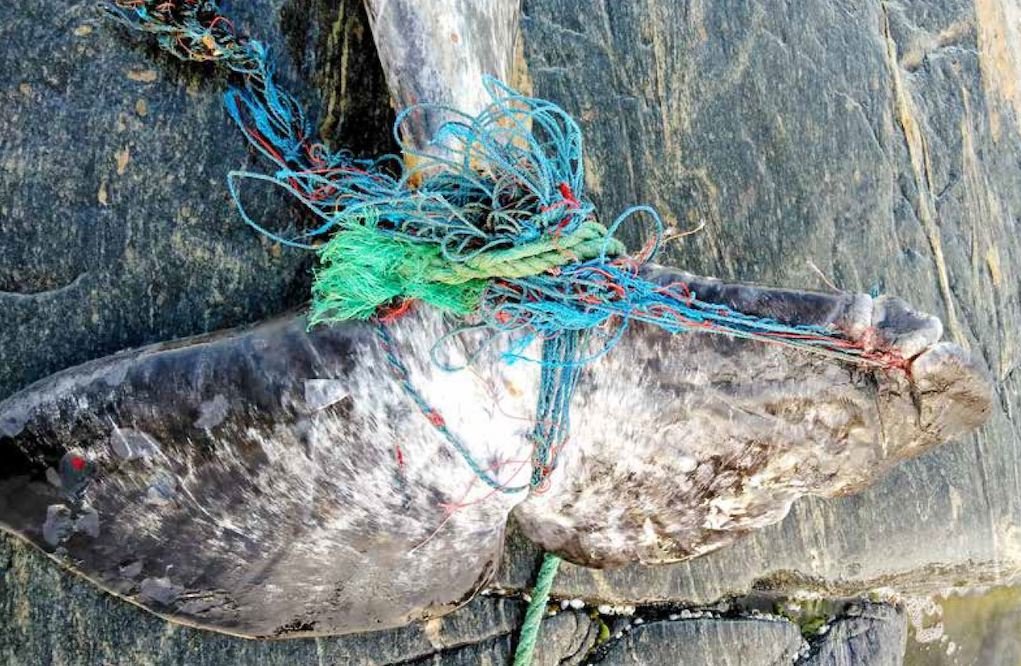 Fishing gear continues to do what it is designed to do, even after it is discarded at sea. Here, fishing gear is wrapped around a whale fluke. (Naalakkersuisut)

So-called “ghost” fishing gear may be robbing the seas around Greenland of more than three tons of fish each year, at a total economic cost that amounts to 5 percent of the value of the country’s most important industry, an estimate by the research and environment ministry reckons.

Ghost gear — commercial fishing nets that are either lost or intentionally discarded at sea — poses a problem in Greenland and elsewhere not just because it continues to trap fish for as long as three years once it is in the water, but also because it can trap other animals. In addition, as the nets age, they break down into increasingly smaller plastic particles that are consumed by all manner of marine organisms, eventually making it into humans.

Half of the plastic that washes up on Greenland’s shores each year stems from the fishing industry. While this has alerted the public and lawmakers to the problem, its true extent is unknown, according to the ministry. That’s because most of the gear remains at sea — where fishermen say it ensnares other nets and fishing lines, which in many cases must be cut free, only adding to the problem.

There is no figure for the amount of fishing gear Greenland’s 1.2 billion kroner ($190 million) fishing industry loses each year, but there is evidence to suggest that it is significant. Using information from fishermen themselves as well as from regional authorities, the ministry calculates that, within three nautical miles of the coast, there may be a total 14,000 square kilometers (an area the size of two million soccer fields) where there is a moderate to high likelihood of finding ghost gear.

The biggest collections of gear may be in 19 hotspots where gear loss is most common, due to the type and intensity of fishing carried out in these areas, combined with conditions on the seabed that can result in nets getting caught or torn.

In recently published recommendations for preventing ghost gear, the ministry suggests starting clean-up efforts in three of the most heavily fished areas, covering a total of 420 square kilometers, where the concentration of ghost gear is likely to be greatest.

Such an effort would involve a ship collecting nets around the clock for a 12-week period each year, and take four to five years to complete, eventually costing 30 million kroner — about half of what the industry loses each year as a result of ghost gear.

The cost of successive cleanups would be lower, but factors such as weather, the distance to port facilities, sea ice and the presence of icebergs would still make it considerably more expensive to remove ghost gear from the waters off Greenland than those elsewhere. The proposed Greenland cleanup would probably cost twice as much as a similar, highly effective, Norwegian program.

While continued cleanups at land and sea will be necessary, the recommendations suggest that the amount of ghost gear can be reduced through financial measures — such as a surcharge or deposit — or by requiring that a net can be traced back to the vessel that lost it.

Such measures have worked in Iceland, where the revenue it generates goes to pay for cleaning collecting ghost gear at sea. The ministry warns, however, that most measures would entail a cost for fishermen, and that if the value of fishing gear increases, it is more likely to be stolen.