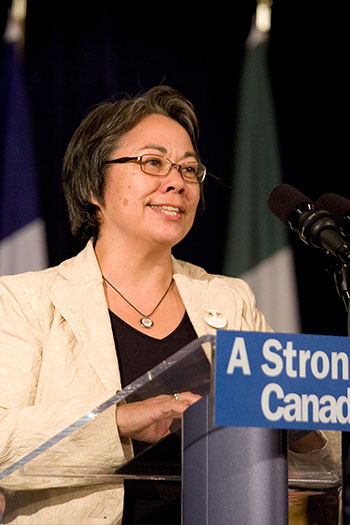 Nunavut Premier Eva Aariak at a press conference with Prime Minister Stephen Harper and the other northern premiers in Yellowknife Aug. 20. Aariak and the two other premiers signed training and skills development agreements with Ottawa at the event. Nunavut will get $4.6 million for training over two years, plus an additional $1.5 million. (PHOTO BY BILL BRADEN)

Prime Minister Stephen Harper wrapped up his five-day northern tour Aug. 21 with yet another re-announcement, then returned to Ottawa from Whitehorse after generating lots of visual images but little real news.

Harper’s last announcement, given in connection with an aerial tour of the Yukon’s Stewart River area, re-confirmed $71-million in federal spending for expansion of the territory’s Mayo dam.

The money, first announced in May, will come from Ottawa $1 billion Green Infrastructure Fund.

The Canadian Press reported that the project is expected to reduce the Yukon’s greenhouse gas emissions by 50 per cent from current levels.

But in Nunavut, where he began his tour Aug. 17, Harper had little to say about Nunavut’s energy needs or the Qulliq Energy Corp.’s plan for a hydroelectric plant near Iqaluit.

Ironically, the diesel-fired QEC power plant in Iqaluit conked out Aug. 19 for more than two hours, bringing business to a halt and idling workers all over the city.

The QEC says they started a controlled shut-down of the plant at about 8:20 a.m. that day after they noticed a critical part wasn’t working. After fixing the problem, they restarted their generators and power was restored to all sections of Iqaluit by 11:30 a.m.

At the time, Harper was in Pangnirtung to re-announce Ottawa’s $25 million commitment to spend $25 million on a small craft harbour for the community.

The first $8 million was announced in the Conservative government’s 2008 budget. In 2009, they added another $17 million as part of their plan to accelerate public works spending to stimulate the economy.

The first phase of the Pangnirtung plan will see the construction of a second breakwater. This will help small vessels tie up and then load or unload vessels.

When the second phase is completed, mid-size vessels will be able to use the harbour.

While in Pangnirtung, Harper met with local people and toured the Uqqurmiut arts and crafts centre.

On the previous day in Iqaluit, Harper “announced” the creation of a new economic development agency, called CanNor, to be headquartered in Iqaluit with offices in Yellowknife and Whitehorse.

The agency, with a budget of $50 million over five years divided among the three territories, will co-ordinate the activities of a long list of economic development, training and language programs run through various federal departments.

After departing Nunavut Aug. 20, Harper flew on to Yellowknife where he signed agreements with the three territorial premiers to spend $36.5 million on worker training programs.

That money, to be split among the three territories, is aimed at paying for skills training to help unemployed people get jobs and is contained in the last February’s federal budget.

Nunavut will get a $4.6 million chunk of money over two years under the scheme, mostly for people who are not eligible for Employment Insurance.

Nunavut will also get a $1.5 million chunk for people who are eligible for EI.

On most of his northern stops, including his inspection of the Operation Nanook exercise, Harper posed frequently for carefully stage-managed photo opportunities.