How a stolen shovel led to a shaman’s curse 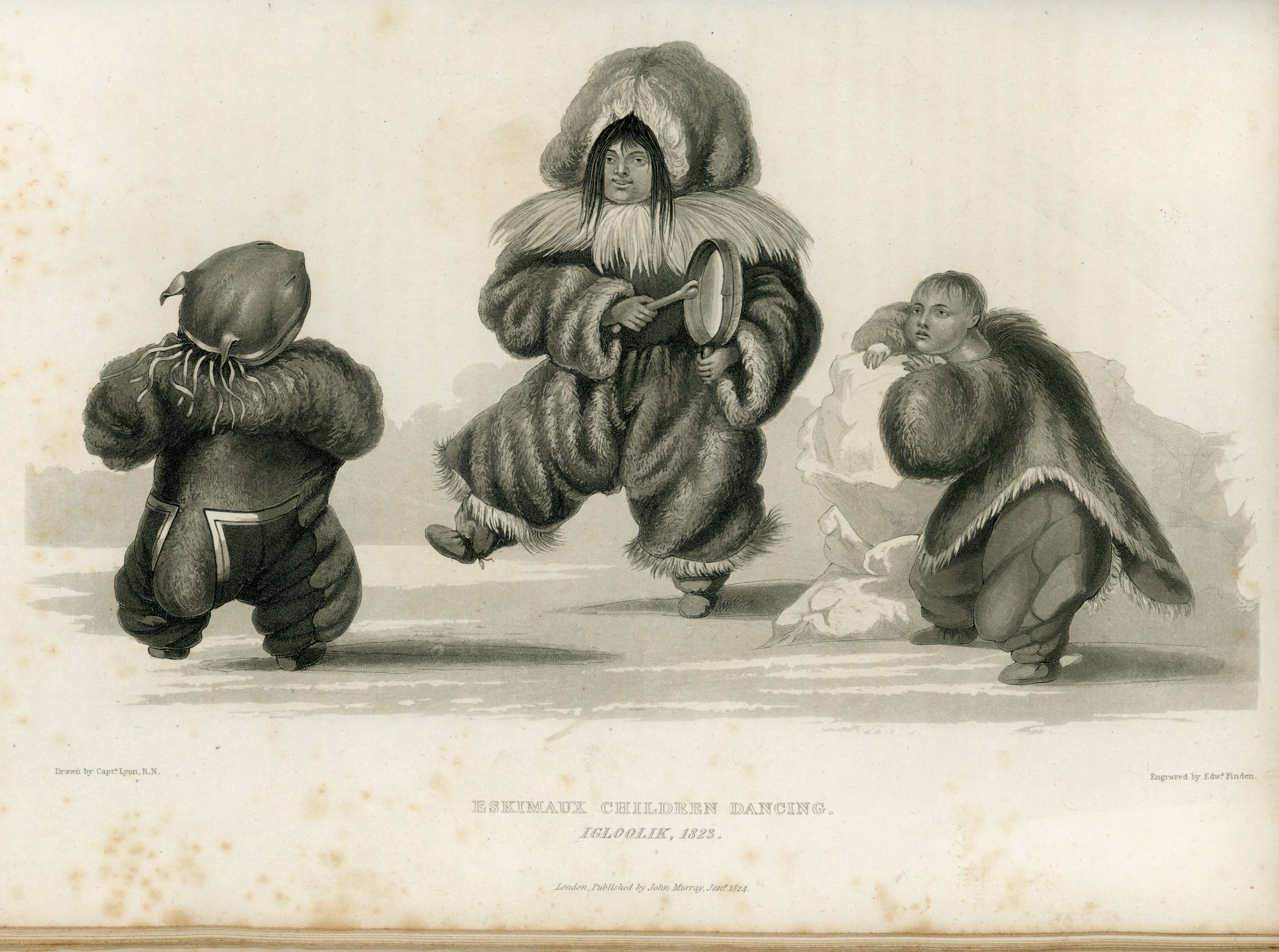 Inuit children dancing. From a drawing by George Lyon. (Illustration from William Edward Parry – Journal of a Second Voyage for the Discovery of a North-West Passage.)

William Parry and George Lyon didn’t discover the Northwest Passage, only a narrow and impractical, ice-choked strait leading west which Parry named Fury and Hecla Strait after the expedition’s two ships. Parry himself described his venture as “unsuccessful, but, I trust & believe, not discreditable.”

That assessment depends entirely on whether one listens to Inuit or Qallunaat accounts. Both explorers went to great lengths to establish friendly relations with the local Inuit.

Indeed, their instructions from the admiralty were, should they meet any “Esquimaux,” to endeavour “to cultivate a friendship with them, by making them presents of such articles as you may be supplied with, and which may be useful or agreeable to them.”

Parry and Lyon were well-stocked with trade goods – tobacco, food, beads, cloth – and were generous with the Inuit; the Inuit in turn were helpful to the expedition, drawing maps, providing and repairing clothing, and welcoming the Qallunaat into their homes.

Presciently, the explorers provided only one man with a gun and enough ammunition for only one season – they did not want to present more lest the Inuit become dependent on rifles, but then have no source of more ammunition. Both men established a rapport with the Inuit and were apparently genuinely interested in them, their customs and their language. Both produced books that were remarkable for their level of ethnographic detail. Lyon in particular was a talented illustrator – his drawings formed the basis for the illustrations in both men’s volumes – and apparently immersed himself in Inuit life, going so far as to have a woman make a two-inch tattoo on his skin.

Sadly, after an uneventful winter, the expedition ended on a sour note. An Inuit man named Oo-oo-took was accused of stealing a shovel from Parry’s ship. Parry retaliated by banishing Inuit from visiting the Fury. Sometime later Oo-oo-took, who had been an infrequent visitor in the past, managed to be on board visiting the assistant surgeon, Mr. Skeoch, in his cabin.

Learning from Skeoch that the theft of the shovel had been discovered, he feared that the man had “dived into his thoughts.” Oo-oo-took went ashore and returned shortly with the shovel. Despite the return of the pilfered item, Parry decided to administer naval discipline and make an example of the man. He conducted what was in effect a “show trial” and had the unfortunate man flogged.

Parry brought several Inuit on board as witnesses, then, “I ordered him to be stripped and seized up in their presence, and to receive a dozen lashes on the back with a cat-o’-nine tails. The instant this was over, his countrymen called out very earnestly, ‘Timun, timunna,’ (That’s right, that’s right) and seemed much relieved from the fright they had before been in while the fate of the thief seemed doubtful; but in three minutes after not one of them was to be found near the ships.… This example proved just what we desired; in less than eight-and-forty hours, men, women, and children came to the ships with the same confidence as before, always [verbally] abusing Oo-oo-took, pronouncing themselves and us uncommonly good people, but evidently more cautious than before of really incurring our displeasure.”

But Parry likely misunderstood the reaction of the Inuit onlookers. The utterance he quotes was probably really, “Taima, taima,” which, in the context, likely meant, “Enough, enough.”

Their pleasantness when they returned 48 hours later was a form of caution in the presence of a “friend” who had begun to act irrationally. 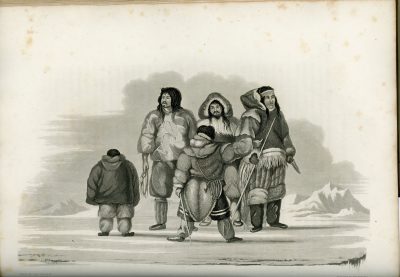 A group of Inuit encountered by Parry and Lyon in 1822 south of Igloolik. (Illustration from William Edward Parry – Journal of a Second Voyage for the Discovery of a North-West Passage.)

The experience of the flogging, passed down to succeeding generations of Iglulingmiut, blighted Inuit memory of the expedition. Inuit told Charles Francis Hall in 1864 that Oo-oo-took, in fact, had been a “superior” angakkuq [shaman].

In the account the Inuit preserved, Parry had Oo-oo-took taken to a place between decks where his hands were firmly tied to the mast.

“Then two guns were loaded and fired at him. The balls did not hit him, but one passed close to his head and lodged in the mast. The other ball went close to his loins, but did not injure him. The guns were so near his body that the powder felt hot.… Then Parry caused him to be whipped with something that was made of ropes with knots in them.”

This is a perfect description of a cat-o’-nine-tails. The Inuit witnesses wanted to help Oo-oo-took but he said, “Let the Kob-lu-nas [Qallunaat] try to kill me; they cannot, for I am an an-nat-ko [angakkuq].”

His hands were untied and the Qallunaat tried to cut off his head and hands with swords, but they were unsuccessful: “Every time a blow was struck, the extreme end of the knife came close to Oo-oo-took’s throat; occasionally the blade came just above the crown of his head, and when the attempt was made to cut off his hands the long knife came down very near his wrists; but after all, he was uninjured because he was a very god an-nat-ko.”

Some of the blows hit him, making deep gashes in his throat, head and wrists, but each time the knife was removed the wounds miraculously healed. After that, he was thrown into the hold for two days and two nights. When he called upon his spirits to split the ship in two, great cracking noises were heard; Inuit believed that is why he was finally released. 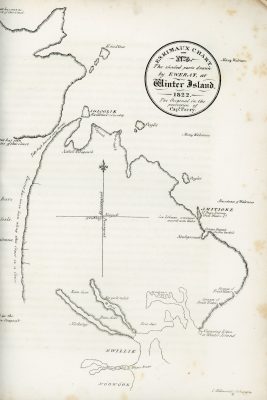 A map drawn in 1822 by the Inuk, Ewerat, and Parry. The shaded parts of the coastline were drawn by Ewerat, the rest and the notes by Parry. “Ewerat” may be Parry’s attempt to write the name “Ujaraq.” (Illustration from William Edward Parry – Journal of a Second Voyage for the Discovery of a North-West Passage.)

But Oo-oo-took was not yet finished with Parry. He had a revenge to exact on him and all his fellow dog-children. He was, after all, a powerful shaman.

Elder Herve Paniaq recorded his knowledge of the events of so long ago, the story of the shaman’s curse, for the Igloolik Oral History Project, and said, “When they were done with him, he blew them away and told them never to return again.”

It is perhaps significant that, after the pronouncement of this curse and the banishment from the island of the dog-children, dogs were named after Parry and Lyon, and later after Hall.

There are other versions of the story that don’t mention the theft of a shovel. In a version recorded in 1991, elder Rosie Iqallijuq said, “I heard at the time when Paarii wintered, there was a shaman who was jealous over his wife when she started to go around with some white people. When the ships departed it is said that with the help of his helping spirit he blew the ship away so that no other ship can ever make it back to Iglulik.”

Indeed, there may have been some truth to this version. In December of 1864, through his interpreter Tookoolito, Charles Francis Hall was interviewing an elderly Inuit woman, Erktua, about Parry’s experiences.

In his journal he recorded that Erktua had been the lover of Parry and then Lyon, noting “Especially Private!” in the margin: “Erktua furthermore says that when Parry found out she had slept with Lyon, and Lyon learned that she had done the same with Parry, they became jealous; and for this Erktua ever after refused to sleep with either again.”

But this did not slow down the red-blooded Lyon. Erktua claimed that when the expedition departed, two Inuit sisters were pregnant with his children.

Indeed, it is possible that the shovel had not been stolen but had been given to someone as a gift, perhaps in return for sexual favours. Royal Navy ships were rife with such gift-giving wherever in the world sailors went ashore.

For some, the shaman’s curse was not just to prevent ships from arriving at Igloolik, but to prevent any white men from arriving there by any means. When Alfred Tremblay reached the island overland from Pond Inlet by dogsled in 1913, the Inuit viewed the curse as having been lifted.

The visit of Hall to the island in May of 1868 doesn’t seem to have counted, perhaps because he was there so briefly, whereas Tremblay remained for a number of days, enough apparently to break the long-standing spell. While there he exhibited his own bizarre behaviour; Rosie Iqallijuq recalled that “he had a pistol so with it he shot the island of Iglulik as he walked around the shoreline. After he had shot the island he said that Iglulik was dead and that a ship will now be able to get to the island.”

Nonetheless it would still be a number of years before any ship reached Igloolik.

It’s sometimes been written that the shaman cursed the island of Igloolik. But that’s not the case. The curse was on the white men – the dog-children – to prevent them from reaching the island again, because of their irrational behaviour and their humiliation of a powerful shaman.

Those vindictive actions, apparently over the matter of a shovel that may have been stolen and then returned, were unnecessary and destroyed the rapport that had built between the people of two quite different backgrounds, who nonetheless had considered themselves kin.