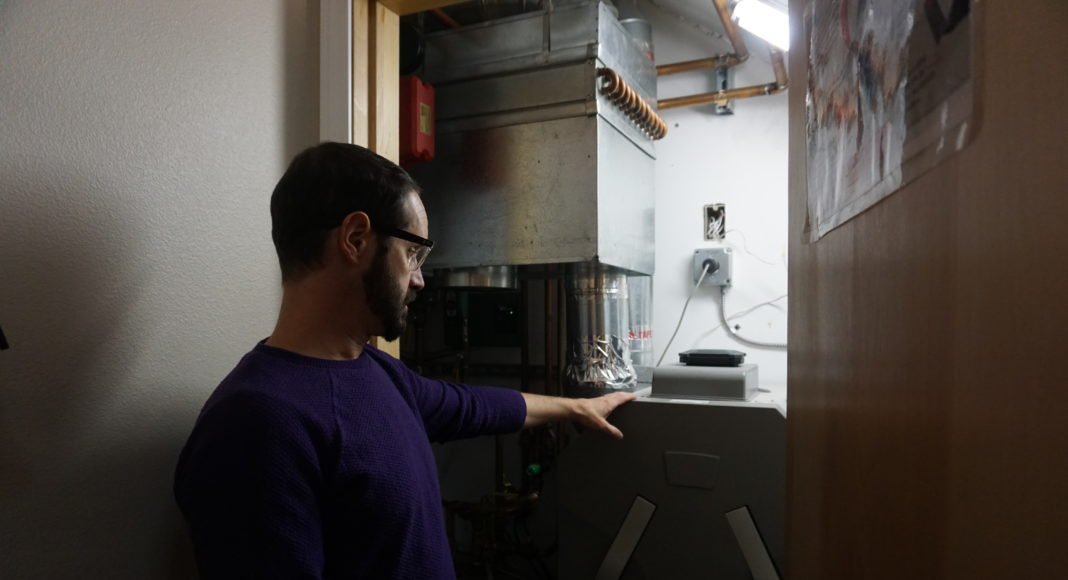 Aaron Cooke demonstrates a heat-recovery ventilator at his house in the sustainable house at the Cold Climate Housing Research Center in Fairbanks, Alaska. (Yereth Rosen)

Tucked in a utility closet of a house in the boreal forest of Fairbanks is a modest-looking metal device that could deliver big health improvements to people living in the overcrowded homes of rural Alaska.

The boxy device pulls heat from stale air going out of the house and transfers it to cold fresh air coming in from the outside. It is one of the innovative ventilation systems installed in the homes of a four-house “sustainable village,” a living laboratory at the Cold Climate Housing Research Center on the edge of the University of Alaska Fairbanks.

Aaron Cooke, an architect who serves as the center’s program manager — and who is a resident of this sustainable village house — likens the heat-recovery ventilator’s interior structure to the multiple adjacent channels in corrugated cardboard. Stale indoor air is pushed outside while clean outdoor air is drawn inside; as the flows pass each other, the incoming air picks up the outgoing air’s heat. “Heat exchange prewarms the air that is wonderfully clean but terribly cold,” Cooke said.

The center has dubbed this ventilation-heating combination design BrHEAThe. It provides a way to balance the need for energy conservation, a perennial issue in cold climates of high latitudes, with the need for fresh indoor air, which is often treated as secondary, to the detriment of people’s health.

“The trouble is a lot of people have to choose between clean air and warm air. If you’re poor, you pick warm,” Cooke said.

In-home ventilation has become an increasingly important priority at the Cold Climate Housing Research Center. Established in 1999, the center has long been recognized for its energy efficiency. A global pioneer in the field of sustainable and energy-efficient housing, its research and testing center is the world’s farthest-north Platinum-LEED rated building. In 2020, the center entered a partnership with the U.S. Department of Energy’s National Renewable Energy Laboratory.

Over time, though, there’s been a growing understanding that warmth is only part of what keeps a house healthy. Jack Hebert, the center’s founder, said he learned that lesson the hard way after all three of his kids developed asthma from growing up in a super-insulated house. The old thinking was “the warmer the better,” he said. “But we didn’t know about ventilation. We do now.” 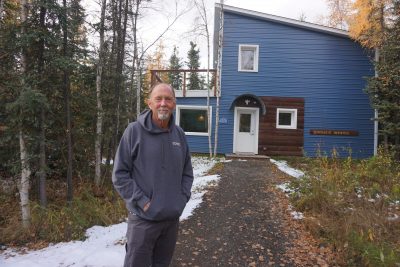 Jack Hebert, founder of the Cold Climate Housing Research Center in Fairbanks, Alaska, discovered the drawbacks of a well-insulated but poorly ventilated home when his children developed asthma. (Yereth Rosen)

The heat-ventilation combination is one of several technologies being developed and tested at the research center to improve rural Alaska housing that is too crowded, too germ-ridden, too prone to deterioration and too likely to spread diseases.

The poor housing conditions that plague predominantly Indigenous villages in rural Alaska have worsened the COVID-19 pandemic in those communities, but the link to multiple health problems there and elsewhere in the Arctic is not new, as numerous scientific studies show.

Respiratory diseases are spread by crowded conditions and exacerbated by smoke in the house, often from wood-burning stoves that are the only heat sources. Crowding is also linked to increased clinical stress, according to a Canadian study, and even to mental health and behavioral problems, as a study from Greenland documents.

The problems start with too many people in too little space.

Statistics in the Alaska villages are dire. More than half of rural houses are overcrowded, according to a 2018 Alaska Housing Finance Corp. report, and rates in some places are 12 times the national average. About 16,000 new houses are needed statewide to alleviate overcrowding, the majority of that in rural areas, according to the report. Statistics are similar for Canadian Inuit communities; in the territory of Nunavut and the northern Quebec region of Nunavik overcrowding is six times the national average, according to Canadian researchers.

Overcrowding has been an enduring problem, said Colleen Deighton, a manager at the Nome-based Bering Straits Regional Housing Authority. A few years ago, she taught school in the Bering Strait village of Shishmaref, where children reported living conditions so tight that family members slept in shifts, she said. 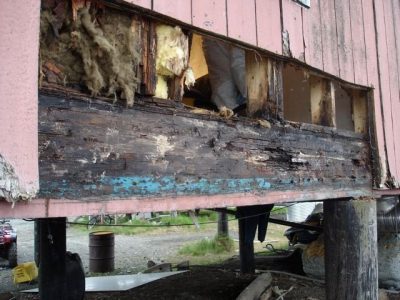 When COVID-19 strikes, it can be almost impossible to achieve the social distancing needed to stop halt diseases spread, she said. “Each individual may have a small circle, but the circles are so overlaid that we are having these massive outbreaks in the villages,” she said.

Logistics aside, the need for social distancing clashes with cultural values of multigenerational living and close community ties, Deighton said. “The sense of community that keeps us strong is doing damage to us physically,” she said.

So an adequate response to rural Alaska housing problems, experts at the CCHRC and elsewhere say, requires a focus on quality as well as on square-foot quantity.

That starts with ventilation. It is not a new design concept in the Arctic and subarctic.

Traditional Native homes were designed with features to bring in fresh air. The Inupiaq word for that ventilation hole in roof of traditional sod homes is kinak – which translates to “nose.” Traditional Yup’ik and Inupiat dwellings incorporated long entryways with that remained open, allowing air exchanges, but with low-lying designs to trap the coldest air and thus help conserve indoor heat. The design of traditional Tlingit log houses promotes internal air circulation, with sunken fireplaces in the center and ventilation openings in the roofs. Athabascan dwellings, many of them mobile tents, also had a ventilation opening in the roof, according to the Alaska Housing Finance Corp. 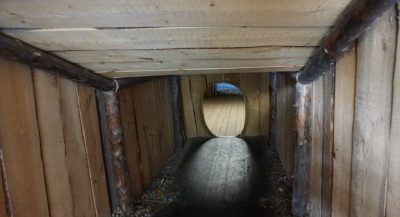 An exhibit at the Alaska Native Heritage Center in Anchorage shows a version of a traditional Inupiat/Siberian Yu’pik tunnel entryway (modified for visitors to walk through), a design that allowed for ventilation while conserving heat. (Yereth Rosen)

While people don’t want to live in sod homes used by their ancestors, they do want their needs and cultures to be considered, said Jack Hebert, founder of the Cold Climate Housing Research Center. That is why Alaska Native people should guide the design of homes they will use, he said. “I don’t think we can, as Western people, really understand what the needs are of rural Alaska and first peoples of this state,” he said. One example of Native needs being neglected, he said, is the common shortage of storage space, both warm and cold, a disadvantage for a subsistence food-gathering lifestyle.

Schaeffer, the community development manager at the Alaska Native Tribal Health Consortium, well knows the problems of living in cramped quarters, including stale indoor air and moisture buildup that damages structures. Her first childhood home had five kids and two adults sharing about 800 square feet of living space; after her parents adopted four more children, the family moved into a different house that was only a little bigger.

“My whole thing is I would hope that, eventually, they design not only for the Arctic but through an Indigenous lens for the lifestyle and through the public health lens because then people don’t have to fly 700 miles to get to a hospital,” she said. 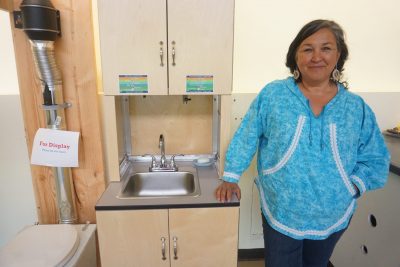 In the Yup’ik village Quinahagak, where the Lower 48 designs wound up being overcrowded and quick to rot and disintegrate in Alaska conditions, the Cold Climate Housing Research Center, in consultation with local residents, designed an octagon-shaped house prototype to fit the windy conditions. The design won approval from the tribal government before the house was built. 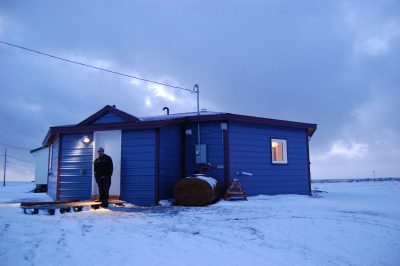 An octagon-shaped home in Quinhagak, Alaska was designed to better suit the environment and Yu’pik culture than designs imported from the Lower 48. (Cold Climate Housing Research Center)

In Mertarvik, the relocation site for the Yup’ik village of Newtok that is in the process of moving inland and away from dangerous erosion, 14 Cold Climate Housing Resaearch Center-designed homes have been built. Each has a sizeable Arctic entry, or elaturaq, plus decks and designated space for cold storage. The houses have been built with in-home water and sewer systems that can operate independently of any municipal utility and skiddable foundation allowing for movement over the ice or tundra.

Another housing innovation is being tested in a pilot project with the Inupiat village of Unalakleet on the Bering Sea coast. Modular kitchen-bathroom-utility cores are being designed and built at the CCHRC headquarters Fairbanks, with plans for shipment next spring to the village, where full houses can be built around the pods at affordable costs while providing local construction jobs.

Unalakleet, with just under 700 residents, is short more than 80 housing units, according to federal calculations, said Kari Duame, housing director for the Native Village of Unalakleet. Many of the existing homes are riddled with mold of other problems, she said.

Unalakleet, like other Alaska villages, needs to move away from a crumbling shoreline where erosion is accelerated by sea ice retreat and permafrost thaw. A development plan adopted by Unalakleet’s municipal and tribal leaders features a managed-retreat strategy, with new housing upslope from the coast. 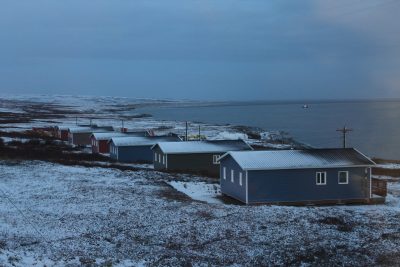 New homes in the village of Metarvik are designed with skiddable foundations, allowing them to be moved over snow and tundra. (Cold Climate Housing Research Center)

Wales, a village of about 150 people located on a tip of land at the narrowest point of the Bering Strait, is similarly shifting to safer terrain. Eleven new houses have been built upslope, where the airport is located and where a new power plant is planned, Deighton said. “Slowly, the village is creeping toward the airport and away from the ocean,” she said.

Permafrost thaw presents special challenges for housing in the North.

Indigenous peoples from reindeer herders in Siberia to the Inuit of Canada and Greenland to the Inupiat of Alaska, have traditionally incorporated solid permafrost into their living spaces and their selection of seasonal travel routes. Among the best-known uses are sigluaqs, the food-storage cellars dug by Inupiat people into ground that is frozen year-round.

But that freeze is much less reliable than it was in the past, and the thaw is creating widespread problems for buildings and other infrastructure around the Arctic. That includes homes now vulnerable to cracks, slumps and potential collapses.

Until recently, Cooke said, conventional architectural wisdom held that any permafrost thaw around structures was the result of bad design.

“But that’s not true anymore. Now, even if you do everything right, even if you insulate your foundation as much as you can, the permafrost might melt anyway,” he said.

The Cold Climate Housing Research Center’s location, chosen deliberately for the precarious state of the warm and thawing permafrost beneath its ground, is a fitting site for testing possible responses to thaw.

Among the technologies being tried is the experimental raft foundation beneath Cooke’s own house in the sustainable village. It can move and shift as the thaw below necessitates, providing some house mobility that may become a way of life for many communities atop permafrost, Cooke said.

“Because this permafrost is so close to degrading, anything you put on this land you have to adjust,” he said. “I think the future of permafrost design is to have mobile foundations.”

This article is part of a series published by Arctic Today. It’s republished with permission.