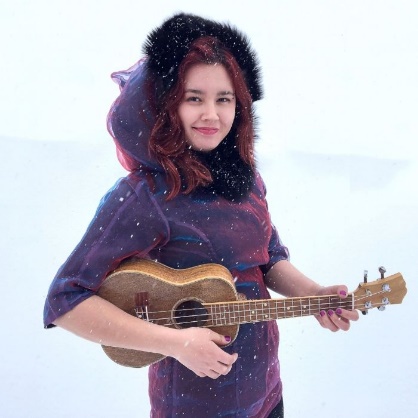 When Iqaluit musician Aasiva picked up the ukulele, it helped open the floodgates to songwriting that had eluded her when she played other instruments. (Submitted photo. Photos by Little.)

How the ukulele unleashed Aasiva’s songwriting

It was a fluke that Aasiva discovered the uke, but it turned out to be what the Iqaluit musician needed both to open the floodgates of songwriting and to get her through some tough times.

Aasiva is the stage name of 23-year-old Colleen Nakashuk, originally from Pangnirtung. She now lives in Iqaluit.

The ukulele is more commonly associated with the south Pacific than with the northern Arctic.

Aasiva discovered it while she was an 18-year-old college student at Nunavut Sivuniksavut in Ottawa in 2015.

The four-string instrument that looks like a mini-guitar has grown in popularity in the past 10 years, since pop musicians, such as Jason Mraz, worked it into their mellow tunes.

She had tried violin and guitar previously, but neither inspired her to write songs the way the ukulele did. Branching out into songwriting had long been a dream but something about the ukulele made it come true.

“I found it was a lot easier than the guitar, so it was easier to find chords that suit my voice a bit better. I’m just speculating,” she said.

It also occurred at a time in her life when she was “experiencing a lot of difficulty.” It was her first time away from home, going through new experiences, a new workplace and being alone a lot because her surroundings were all new.

In fact, one of the songs she wrote is called Inutuugumagama, which translates to “I Would Like To Be Alone.”

She didn’t want to get specific about mental health issues she has faced except to say she has experienced “a lot of trauma” in her life.

“A mixture of everything helped me,” she said, explaining how she saw a health nurse, a counsellor, and went out onto the land to reconnect with her Inuit culture, but kept coming back to music.

“Music speaks to me in a way nothing else does.”

In November, Aasiva took part in the RBCxMusic concert series, an online event to help emerging Canadian musicians get through the COVID-19 pandemic by performing short online concerts.

Some of her songs are a fusion of north and south where throat-singing is “interwoven” with ukulele. She didn’t do any of them for the live performance, but they were on the first album she recorded.

Taking part in the concert series helped her get back into music after the pandemic sidelined her. Aasiva had been playing at festivals throughout Nunavut, where she would also teach workshops about how to play the ukulele.

When the playing and teaching slowed down, she took an office job in Iqaluit with an Inuit business training organization. She’s now working on a second album and hopes to release it in 2021.