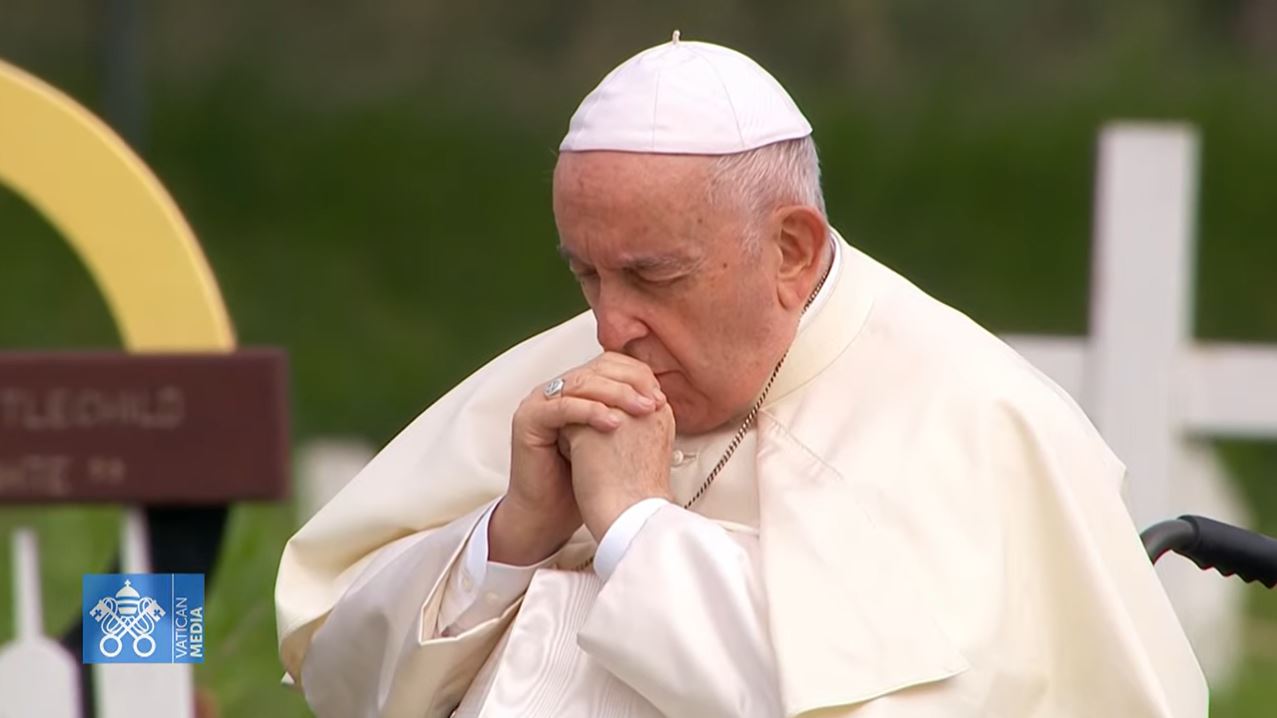 Pope Francis is seen praying at the Ermineskin Cree Nation Cemetery on Monday in Maskwacis, Alta., as part of his visit to Canada. (Screenshot from Vatican News/YouTube)

Pope Francis offered a long-awaited apology Monday to an audience of Indigenous people in Alberta for the actions of members of the Catholic Church and for the “catastrophic” effects of Canada’s residential school system.

“The first step of my penitential pilgrimage among you is that of, again, asking forgiveness, of telling you once more that I am deeply sorry,” Francis said.

The Pope made those comments at a ceremony on the former site of Ermineskin Residential School in Maskwacis, Alta., on Monday, the second day of a Canadian visit that began in Edmonton.

Several hundred Inuit, First Nations and Métis from across the country were in the audience for the remarks, along with dignitaries including Prime Minister Justin Trudeau, Gov. Gen. Mary Simon, Nunavut MP Lori Idlout and Inuit Tapiriit Kanatami president Natan Obed.

Speaking in Spanish, his first language, Pope Francis acknowledged the painful stories he heard from residential school survivors about the experiences they had during their childhoods. His remarks offering apology were met with brief applause from the audience.

Many in the crowd were visibly emotional and attentive, while others had their phones out taking pictures and videos. Francis, who is 85 years old, has been dealing with health and mobility issues. He delivered his remarks seated, after being assisted to the stage in a wheelchair.

“This was a disastrous error, incompatible with the Gospel of Jesus Christ,” Francis said of Canada’s residential school system.

“I humbly beg forgiveness for the evil committed by so many Christians against the Indigenous Peoples.”

The Pope also included a message about what needs to happen next. He said the church needs to ensure that what happened in the past is fully investigated so that it never happens again.

“An important part of this process will be to conduct a serious investigation into the facts of what took place in the past and to assist the survivors of residential schools,” he said.

The remarks ended with a moment of silence, after which several of the attendees climbed on to the Pope’s stage to present him with gifts.

After the event ended, Pope Francis left Maskwacis for an event at St. Joseph Seminary in Edmonton.

Afterward, the Pope’s apology drew reactions from within the grounds of the ceremony and online.

Elmer St. Pierre, national chief of the Congress of Aboriginal Peoples, said the organization welcomes the apology but more action must follow.

“The symbolic gesture of an apology is appreciated and an important first step, but the Catholic church must now focus on reparations and action to ensure reconciliation can be achieved.”

Idlout, who was present at the ceremony, issued a statement through the NDP shortly after the speech.

“The Pope’s visit is an opportunity to forge a new path toward healing — it must not be symbolic,” she said in a news release.

“Co-operating with ongoing investigations and making all documents requested by survivors, police and local governments available is the very least that the Church and the federal government can do for Indigenous peoples.”

Canada’s residential school system was a federal government policy from the 1880s until the 1990s. It was designed to separate Indigenous Peoples from their language and culture by removing children from their family and community, and making them live at one of the 139 schools.

Many of the children suffered physical and sexual abuse at the hands of Roman Catholic clergy, who were responsible for running the schools.

Canadians began to understand the impact of residential schools a year ago when they learned many of the schools had unmarked graves nearby.

Francis gave a similar apology in April of this year after meeting with delegations of Inuit, First Nations and Métis. But that apology was given at the Vatican, setting the stage for the head of the Roman Catholic Church to come to Canada this week to deliver the same message to Indigenous Peoples.

The Pope’s trip through Canada continues this week with events in Edmonton and Quebec City, before a final stop on Friday in Iqaluit.